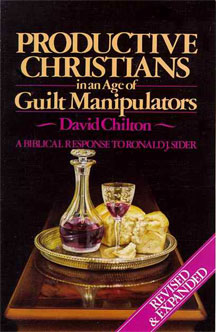 If you want a cold, honest assessment of socialism you will not do any better than David Chilton’s forgotten book, Productive Christians in an Age of Guilt Manipulators.  Written at the height of the Cold War (1981), it is more relevant now than it was when he wrote it.

I have owned my copy of the book since I met David back in 1989 but I never read it. Why? Back in 1989 is when the Berlin Wall came down and the Soviet Union collapsed. I considered reading it back then, but we thought socialism, like the Soviet Union, had been disgraced and relegated to the scrap heap of failed human experiments. Sadly, like a bad movie or a fatal case of cancer, socialism is back.

One reason that I like reading the book is because Chilton is far removed from the current controversies raging in our country. This makes him a disinterested party free from opinions on Bernie Sanders and A.O.C. He is looking at the facts of socialism from a philosophical and historical perspective.

David goes further by not just describing the disease but the cure. In his writings, all things are measured by Scripture including governments and their ideas. On its surface, the book is a rebuttal of a “Christian Socialist” named Ron Sider.

I’m not done with the book, but I just had to blog on it after reading the excerpt which I quote below.

Envy is the greatest disease of our age. It is often confused with jealousy and covetousness, which have to do with wanting the possessions and privileges of others. Envy is much more insidious – and deadly. Envy is the feeling that someone else’s having something is to blame for the fact that you do not have it. The principal motive is thus not so much to take, but to destroy. The envier acts against the object of his envy” not to benefit himself, but to cut the other person down to his own level-or below. The American Puritan divine Samuel Willard defined envy as “a man’s repining at his neighbour’s Prosperity, looking upon himself to be Hurt by it.” In his massive study of envy, Helmut Schoeck points up this central factor: “the envious man’s conviction that the envied man’s prosperity, his success and his income are somehow to ‘blame for the subject’s deprivation, for the lack that he feels. ‘ It can be summed up in Pierre-Joseph Proudhon‘s famous epigram: Property is Theft!

This explains why “Envy and Malice are inseparable”; as we can see from the example in Genesis quoted above, the envier’s goal is destruction. Henry Hazlitt writes: “The envious are more likely to·be·mollified by seeing others deprived of some advantage than by getting it for themselves. It is not what they lack that chiefly troubles them, but what others have. The envious are not satisfied with equality; they secretly yearn for superiority and revenge.”

And it is this envious, destructionist mentality, nursing itself on the notion that ”your wealth is the cause of my poverty, “that is the basic ethos of socialism.  For socialism does not…..and cannot – build up capital. It seeks only to expropriate or destroy the capital of others. It exalts a malignant, misanthropic disposition into an article of political economy, a machine for tyranny. Socialism is institutionalized envy.
Pages 139-140

Productive Christians in an Age of Guilt Manipulators