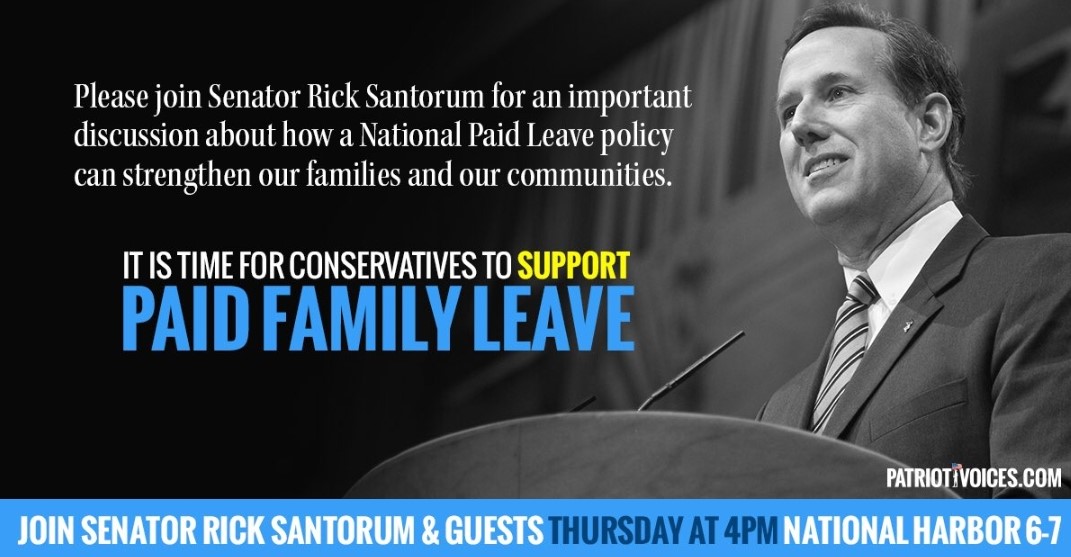 Wednesday, I was browsing my email account when this gem from former Pennsylvania US Senator, Rick Santorum, showed up in my IN Box. Folks, when I read it, I had about the same reaction that I do when Chef Gordon Ramsey is pillaging a restaurant’s walk-in refrigerator on Kitchen Nightmares.

I wanted to hurl.

Santorum claims to be a conservative; however, a quick internet search reveals that “These days, former Pennsylvania Sen. Rick Santorum is a senior analyst on CNN…”

The email in question stated that Santorum has started a campaign to get Conservatives on board with supporting paid family leave. Rick apparently is proud to attach his name to this idea. “Little Marco Rubio” is also attached to this venture. Here is a screenshot of the email from Santorum.

Santorum, like the Republican Party in California, has jettisoned the old notion of less government and exchanged it for more tyranny. Apparently the old adage “if you can’t beat ‘em…” still rings true. When “conservatives” are offering more government as the solution to the problems created by government, then you know that something is amiss.

Folks the entire concept of paid family leave is nuts. The only reason that women must work is due to the confiscatory taxation of our population. If you added everything up, half of what you earn goes out in taxes of one form or another. If you don’t believe me, just make a list. FYI there are about 30 different taxes on your telephone. I don’t even think the “Sith Lord” could list them all but he’d probably get closer than our average reader.

What real Conservatives believe or at least they used to, is that you should keep more of your money because you can spend it better than someone in Washington or Sacramento.

The idea that a Conservative Political Action Committee (C-PAC) would ever give Santorum, Rubio & Company a place at their event is proof that their values are eroded.

In case you went to public school or weren’t paying attention, we threw the British out of here in 1776 because of a three percent tax! Boston Tea Party ring a bell? The cry was “Taxation without representation.” So how has the “taxation with representation” worked out?

Oh, speaking of three percent tax rates, that was the maximum tax proposed on the very rich in 1917 when the temporary tax called the Federal Income Tax was adopted to pay for our involvement in World War I. Again, how has that taxation with representation worked out?

Many years ago, I did contribute to Santorum’s failed Senate re-election bid. In light of recent events, it’s a good thing he lost. If this is what it takes to stand out in Republican circles these days and gives you the “street cred” to claim the conservative mantle then Paul Ryan and Mitch McConnell aren’t the only guys stinking up the once Grand Old Party.

Oh, if you check Rick’s website, they are talking about letting you tap your Social Security Trust Account to pay for this. No, really.

The plan is relatively straightforward — new parents could borrow against their future Social Security benefits by taking up to twelve weeks of payments after the birth of a child.

Back in the last year of the Bush Administration, I looked up the government’s statistics on unfunded mandates of the Federal Government. Social Security was the lion’s share of underfunded mandates totaling about 55 trillion dollars and now “Little Rubio” wants the snowflakes to tap it? Great idea.

I like President Trump but apparently he supports this idea too.

If this does get implemented, how much will you bet me that the Democrats find a way to take all the credit? This has been one of their pet issues for many years.

Hey Rick, way to throw the next generation under the bus by claiming to save them. Oh wait, I sense another government program on the horizon to fix this mess…