Many media stories this week have reported that HP is planning to sell their PC division. Their excuse is that sales are sluggish and the computer division has a low profit margin. This is not the real reason. Clearly their bean-counters realize that Obama-care and promises of higher taxes will kill the PC division so they are having the firesale now. The economic excuse is not present conditions but future ones that have prompted this pre-emptive fire sale.

The California Republican Party is going through the process of looking at the Party Platform. This ritual—which occurs every four years—has seen a marked change from previous meetings of the Platform Committee. This year, the “moderates” briefly succeeded in stripping all references to social issues from the platform. Some were subsequently re-inserted in generic ways while some are no longer in the draft constructed by a sub-committee of the Platform Committee. Abortion and marriage went from an entire section for each issue to one sentence in the new draft while opposition to euthanasia has been completely deleted.

Here are the parts of the platform document that reference abortion, guns and marriage. The underline means that text was added after being removed in the original draft. (Abortion and gun ownership are never mentioned in the new proposal. Marriage is no longer defined as being between one man and one woman.)

The Republican Party supports traditional marriage as the foundational unit for our society and key for the future of our children.

Here are portions of a recent news account of the changes.

A proposed rewrite of the California Republican Party platform retreats from opposition to same-sex adoption, domestic partner benefits and child custody, avoids any mention of overturning Roe v. Wade and drops a demand to end virtually all federal and state benefits for illegal immigrants…

…The current platform, adopted in 2008, says state guns laws “disarm law-abiding citizens” and calls for the end to waiting periods to purchase firearms and inclusion of a right to carry concealed weapons in the state constitution. In the proposed version, a single sentence is included on gun ownership, saying the party supports Second Amendment rights.

A detailed section titled “The Right to Life” vanishes, including a call to reverse the landmark Roe v. Wade decision that legalized abortion. It would be replaced with a single sentence on the protection of innocent human life, and the word “abortion” never appears.

The proposed platform states the party “supports traditional marriage,” a significant rewrite from 2008, when the platform said marriage should be defined as between a man and woman, and schools should not teach homosexuality as an “acceptable … lifestyle.” Californians have twice voted to outlaw same-sex marriage, but a federal judge last year declared the latest ban, known as Proposition 8, unconstitutional. The ruling is being contested in court.

It also drops a sentence opposing assisted suicide, as well as a line saying the party supports stem-cell research “that focuses on cures, not destroying innocent human life.”
http://sacramento.cbslocal.com/2011/08/05/moderates-try-to-push-calif-gop-toward-center/

The Party has been moving in this direction for many years but it appears that the Party is close to abandoning any mention of social issues. Ironically, party affiliation has become a distinction without meaning under the open primary rules that voters will be under in 2012. By eliminating one of the cornerstones of conservatism in the platform, people are now offered even less reasons to identify themselves as Republicans. Due to stalling and lack of vision, the Party has virtually assured themselves that few if any endorsements will be had during the next cycle. (They have no effective plan to function in the “Open Primary” environment and keep deferring the issue to future conventions.)

Lastly, who do Conservatives have to thank for their declining influence in the Platform Committee? Karen England. The week-end when she, Mike Spence, Ron Givens and the gang were trying their hostile takeover of CRA was the same week-end when elections were held by delegated to the California Republican Party to select members to represent them on the Platform Committee. Once again the circular firing squad turns victory into an opportunity for self-immolation.

I have been reading Exodus to my six year old son and it reinforces the idea that we Republicans will be wandering in the wilderness until this corrupt generation passes away. Perhaps by then the “Promised Land” will just be a mirage in our rear-view mirror. Our momentum now is to return to Egypt. If “moderate” Republicans get their way, they will be walking arm-in-arm with the Democrats as they lead us down the road to serfdom. 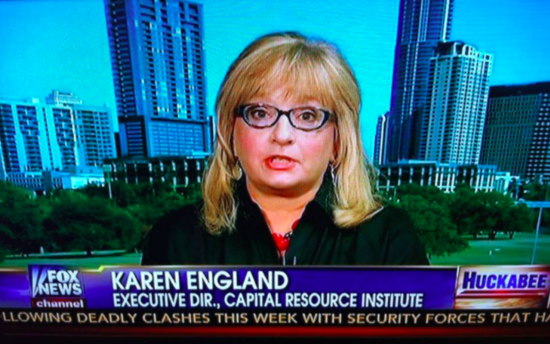 In response to being booted from the CRA, Karen England and company have embarked on a venture to establish a competing organization. They are the Conservative Republicans of California. http://calconservatives.com/

I missed where the rule is that any splinter group from the CRA must use the letters “CCR”. In 1989, it was the California Congress of Republicans and now we get the CRC. At least when I Google them I don’t get more hits for a 1960’s rock band than I do for them.

Most of the web content is boiler plate from other places. One of the few nuggets of original content is a meeting during the next California Republican Party Convention. The big question is will they take their battle with the CRA to the next level or channel their energy into getting recognition of their new group? A few days ago I went to Border’s Books to browse their remaining inventory during their going out of business sale. I had a feeling that sections would be somewhat disorganized. The attached photo is one such example. Since there were several pre-season football games on the TV at the time of my visit, I thought maybe this was a commentary on fantasy football. The photo below is not staged, just strangely random.

Also, I found Charles Dickens classic “A Tale of Two Cities” in the Science Fiction section.