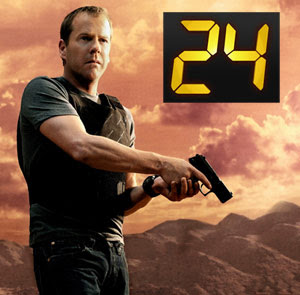 Why is it that when any of the big three television networks nuke part of the United States they are considered visionary and creative but when Fox does it on their show “24” they are going beyond the bounds of good entertainment?

NBC nuked Charleston South Carolina back in the 1980’s. Others programs and movies have nuked Kansas, Denver, Seattle, Las Vegas, New York, Maryland and many other places. Not too long ago, CSI Miami foiled a dirty bomb plot in south Florida. The whole plot of Heroes this season is preventing a thermonuclear detonation in New York City. Another movie, Manhattan Project, showed in detail how to design and build a suitcase-sized nuke. Why is it when 24 lights one off in southern California that all hell breaks loose in the media?

This is really crazy. The more you think about it, the less this feigned outrage seems to make sense. But look again.

Most of these movies and TV shows can be put in two categories. They are obviously fiction—Sci-Fi, thriller or action flicks—or blame the warmongering US military. If you stay in either category then the Liberals will leave you alone or even endorse your production.

Many nuke films in the 1980’s had the political undercurrent that we couldn’t control our own weapons and shouldn’t have them; especially the ones targeting the peace loving peoples of the Soviet Union. In the NBC film and many others, we nuked ourselves because we couldn’t control our weapons. War Games taught that the only way to win is not to play.

24 dares to get into the realm of the possible. Their program however doesn’t blame Republican administrations for having militaristic ambitions that they can’t control. Instead in 24, they actually have the gall to say that Islamic Fundamentalists want to harm our country and destroy our way of life. These terrorists would do this if they could. Unfortunately for Liberals, this is the same message that George Bush has been proclaiming since 9-11.

The Liberal hate and outrage is triggered because Bush supporters believe that something like 24 is portraying will happen if we don’t support the Bush administration.

It is unfortunate that the Liberal hatred of Bush is greater than their sworn oath to protect and defend the United State from all enemies. As a result, the Liberals have become the domestic enemies that the Founders warned us to vigilantly oppose.

I’m really looking forward to getting myself a computer that can put Windows Vista to the test. Unfortunately, I will not be running out on January 30th to buy the new operating system from Microsoft.

First, I want to know if there are drives available run my hardware. When I upgraded to the 64 bit version of Windows XP many of my otherwise perfectly fine printers, cameras and other gadgets no longer worked. The lack of support by manufacturers was significant.

In addition all my trusty computer utilities were instantly obsolete. In fact most software companies still don’t support 64 bit operating systems. I had this wonderful OS with no antivirus, defrag or registry cleaning ability. Many programs that I rely on would not work and were not going to be supported by software makers. This included many 32 bit programs. By design no program with 16 bit code will run on a 64 bit OS. This includes Windows Vista. There are supposed to be both 32 and 64 bit versions of the new OS but information is not easy to find on the Microsoft site.

While a few companies finally did patch their code enough to run on a 64 bit OS, most also decided that I must be a business if I run a 64 bit OS and priced their products accordingly. Microsoft doesn’t even fully support the 64 bit version of XP. Their new OneCare product with anti-virus and other utilities will not work on their 64 bit OS.

64 bit computing is here to stay but will Vista be fully supported by the industry from the introduction on January 30? HP will not even release a list of their products that are supported in Vista until the 30th.

Will hardware manufacturers have a variety of drivers ready? Will they let us Beta Test their drivers and then find something that works or have they done their homework?

Based on my experience with 64 bit computing thus far, I recommend caution before blindly upgrading to Vista. In fact, Microsoft doesn’t even allow me to upgrade my OS to Vista. I must wipe the drive and start over.

If Microsoft can’t fully support their own software, what hope is there that the entire industry will do better?

It seems that Arnold Schwarzenegger has morphed into a caricature of Maria’s Uncle Ted Kennedy.

When I voted to reelect Governor Arnold Schwarzenegger in November, he had an “R” next to his name. While I knew he was on the fringes of the Republican Left, he was better than the other guy.

This week however, he seems to have completed the metamorphosis that he began after the failed special election just over a year ago. If you recall, he dumped many on his staff from the Pete Wilson camp and replaced them with others further to the left including some Democrat activists. (Any Republican getting to the left of Wilson is a remarkable feat all by itself.)

I wonder if these changes started with his motorcycle accident.

In recent weeks we are seeing just how far the Governor has gone. With universal healthcare and the myth of global warming as his main issues, I’m wondering what happened to the man who promised fiscal responsibility and blowing-up the boxes of government waste.

Arnold has been playing a shell game of reducing the deficit spending that he inherited from Gray Davis and trading it for tens of billions of dollars in bonds. (If Schwarzenegger gets Phase II of his plan, the bond debt will be in the hundreds of billions.) He is mortgaging our future to pay the legislative credit card debt of the past and present. He is not addressing the structural flaws in the current budgetary system.

For and analysis of Arnold’s healthcare idea see RomneyCare vs ArnoldCare at this link.
http://hughhewitt.townhall.com/g/8e266ace-3c9d-4c8e-aaf3-aba37fff76bf

The sundering of the Democrats is underway. The motley group of single-issue hippies and socialists that vanquished their common enemy, the GOP, is now dissolving their coalition and going for each other’s throats. This is the result of them not having a unified view of policy on the Global War on Terror and other issues confronting our nation. Heck, most don’t think there is a War on Terror. To them, 9-11 was just a fluke.

The multitasking granny, Speaker Pelosi, has already broken every promise of ethics, reform and openness that she made during the campaign at least twice and she isn’t even done with her second week. It is unclear whether the new crop of freshman in her party will stick to their conservative campaign promises or back Nanny Pelosi in here quest to deconstruct our national defense and economic prosperity.

The fever swamp wants impeachment and withdrawal from Iraq while Nancy wants her party to get the White House in 2008. Before summer, she will have alienated most in her party and put the legislative branch in gridlock.

Nancy’s claim to be the most powerful woman in the country was an insult to Mrs. Clinton. Without the Senate, Nancy’s utopian dreams are unachievable. With the amount of mistakes she has made thus far, we will see how long Speaker Pelosi can ride her wave of glory.

This one could make Jay Leno’s Headline segment.

In the December 29, 2006 edition of the Sacramento Business Journal is the following item on page 33.

Rachel Mikel is suing Petsmart, Inc, Whitney Lumstead and Antionette Valles for a complaint of sexual battery and false imprisonment.

This raises many questions to the careful reader including:
How did Rachel get in the gerbil cage?
Are Whitney and Antionette employees?
Does Rachel buy all her leather goods at Petsmart?
Aren’t the cages too small for any kind of imprisonment?

Rachel, that’s not what they mean when they offer obedience classes.