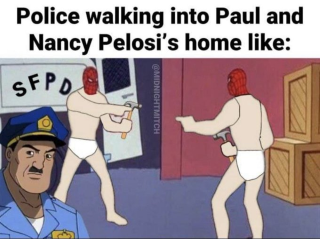 Yep, before the wounds were cleaned from Paul Pelosi getting hammered, the Democrat spin machine was ramping up to frame Republicans.

Below is an early report from Associated Press and CBS News.

San Francisco – The suspect in the attack on Paul Pelosi, husband of House Speaker Nancy Pelosi, appears to have been an active online participant in multiple conspiracy theories railing against perceived censorship and government control, and engaging in hate speech and antisemitism.

DePape was known for embracing multiple conspiracy theories on subjects such as voter fraud, climate change, and the COVID pandemic on at least two different online forums. He also has posted antisemitic screeds and entries defending former President Donald Trump and Ye, the rapper formally known as Kayne West who recently made antisemitic comments.

In other posts, the writer said Jews helped finance Hitler’s political rise in Germany and suggested an antisemitic plot was involved in Russia’s recent invasion of Ukraine.

In a Sept. 27 post, the writer said any journalists who denied Trump’s false claims of widespread voter fraud in the 2020 presidential election “should be dragged straight out into the street and shot.”

An Aug. 24 entry titled “Q,” displayed a scatological collection of memes that included photos of the deceased sex offender Jeffrey Epstein and made reference to QAnon, the baseless pro-Trump conspiracy theory that espouses the belief that the country is run by a deep-state cabal of child sex traffickers, satanic pedophiles and baby-eating cannibals.

“Big Brother has deemed doing your own research as a thought crime,” read a post that appeared to blend references to QAnon with George Orwell’s dystopian novel “1984.”

In an Aug. 25 entry titled “Gun Rights,” the poster wrote: “You no longer have rights. Your basic human rights hinder Big Brothers ability to enslave and control you in a complete and totalizing way.”

DePape’s posts frequently fixated on the subject of government or tech company “censorship.” One blog has subject tabs with such labels as “Pedophile normalization,” Creationism,” and “Facts are Racist.”

Another website has categories such as “Climate Hysteria,”  “Da Jewbs,” and “Groomer Schools.” The web hosting service WordPress removed one of the sites Friday afternoon for violating its terms of service.

DePape also posted memes and conspiracy theories on Facebook about COVID vaccines, the 2020 election and the January 6, 2021 attack on the Capitol. Two of DePape’s relatives told CNN that he was ‘out of touch with reality,” estranged from his family, and confirmed that the Facebook account – which was taken down by the social media company on Friday – belonged to him.

All weekend the media was regurgitating this story or ones in a similar vein.

Folks, as a Trump supporter, this article looks very embarrassing and maybe even damaging to the cause; however, virtually every assertion in the above quotations is a bald-faced lie. David DePage had no websites or Facebook pages. Yep. It was a psyop.

The mainstream media attributed two websites to the man arrested with Paul Pelosi on early Friday morning, David DePape. However, this all appears to be another far-left farce.

In addition, the media tried to frame DePape as a conservative based on websites that were reportedly his. DePape was homeless and a drug addict but the media insisted he was running a conservative website? Makes perfect sense.

Facebook disabled DePape’s profile early Friday and declined to answer questions. At least two online blogs under DePape’s name are stocked with posts from the years of 2007 and 2022 speaking of “censorship,” “Big Brother,” and pedophiles. One contained calls for violence and antisemitic content. It was not immediately clear that he was responsible for the posts, and San Francisco police did not immediately respond to questions about DePape’s online presence.

In the months before police accused him of attacking House Speaker Nancy Pelosi’s husband Friday morning, David DePape had been drifting further into the world of far-right conspiracies, antisemitism and hate, according to a Times review of his online accounts.

In a personal blog that DePape maintained, posts include such topics as “Manipulation of History,” “Holohoax” and “It’s OK to be white.” He mentioned 4chan, a favorite message board of the far right. He posted videos about conspiracies involving COVID-19 vaccines and the war in Ukraine being a ploy for Jewish people to buy land.

DePape’s screeds included posts about QAnon, an unfounded theory that former President Trump is at war with a cabal of Satan-worshipping elites who run a child sex ring and control the world. In an Aug. 23 entry titled “Q,” DePape wrote: “Either Q is Trump himself or Q is the deepstate moles within Trumps inner circle.”

The problem is the websites cited by the mainstream media that were supposedly aligned with DePape were created on Friday and they are no longer active today, Saturday.

The site Godisloving.wordpress.com was opened on Friday and shutdown on Saturday.

If you try to link to it now, you will find it has been shut down

The other site listed, www.frenlyfrens.com/blog is no longer active as well. It too was created on Friday and shut down on Saturday. The only activity on this site as well was in the last two days.

If you read the article quoted above, the author is correct in stating the sites were created Friday October 28 and taken down Saturday the 29th. I verified it. Since he wrote the article, archive.org has attempted further backups. Following the URL will take you to a jump page stating the site is down.

The moral of the story is that facts are irrelevant because Democrats just make-up their own. This is the intersection of “he who frames the issue, wins the debate” and “never let a good crisis go to waste”.

With just a week until election day, would you really expect anything else?