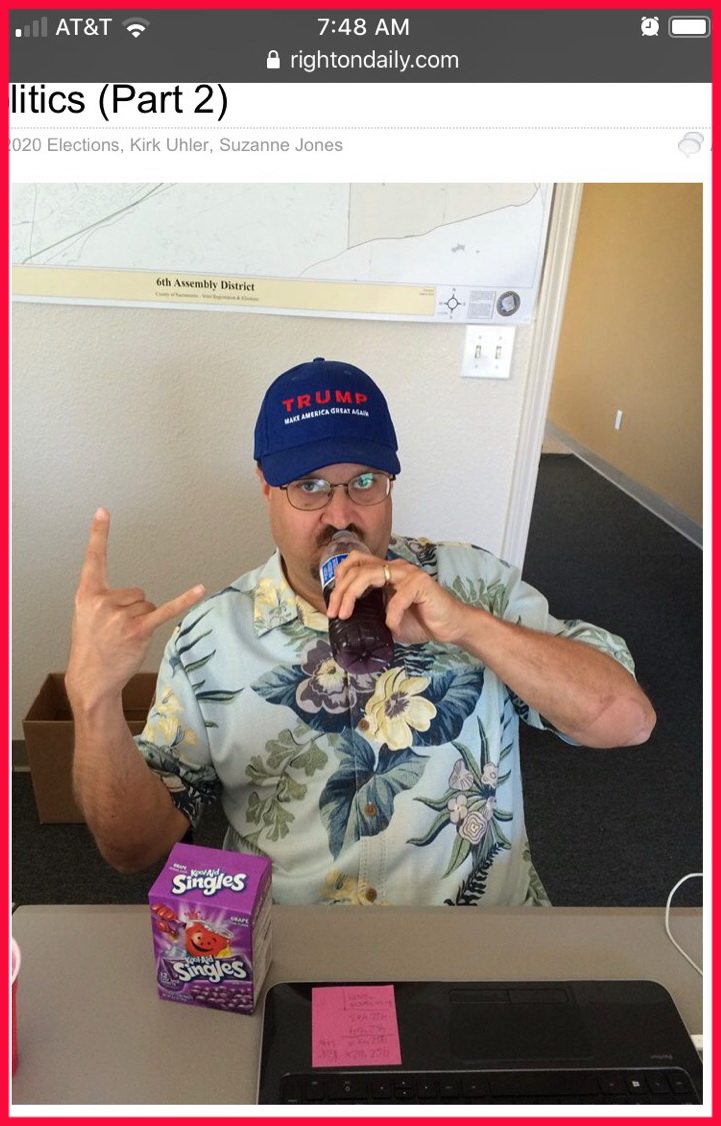 I woke up this morning to a sound of a baby crying, which is odd since I have no offspring that I’m aware of. Turns out it was a story sent to me by a friend of mine, from the blog of a man who no longer has many friends, Aaron F Park. I wish I could get back the five minutes of my life I spent reading that absolute abomination of a wannabe hit piece, but I would rather not bleach my eyeballs. In the piece, Aaron tried to lay out the case as to why his client, Supervisor Kirk Uhler lost re-election. He used classic Aaron Park lines from every campaign he had run…. “You took down my clients signs.” “She was funded by far left people” “Tried to use undue influence over the public.” Aaron these were all total and complete bunk, and you know it!

Editor’s Note: I tried searching for a recent photo of Aaron F Park on Bing for use in this post and the second image was a dumpster fire; ok, actually it was a row of porta-potties totally involved in flames but isn’t that actually worse?

I have spoken to about 8 folks in Placer, specifically about your political operations. All were less than impressed. All 8 live in Supervisor District four, home of your doomed client Mr. Uhler. None of them to a man could bring themselves to vote for Mr. Uhler. They described Uhler as being one of the most arrogant, condescending human beings they have ever met. Furthermore Mr. Park, no one had a good thing to say about you. Most questioned you even wanting to be in politics due to your extremely thin skin. When I brought up as your name as an insurance professional, they all became flat out irate. Seems like you are a failure at both lines of work…congrats!

Aaron let’s take a close look at some of the clients you helped usher into office…..for the low, low cost of just a couple hundred bucks a month blogging fee you charged!

William “Bill” Brough, you piled on Anna Bryson, (congrats you successfully wiped those posts from your blog) and defended a womanizing, alcoholic, sexual assailant. You now claim you never knew, and blogged about his exploits in the Capitol, I consider you an accomplice.

Ted Gaines, this was classic Aaron. He was all in against Roger Niello, and according to Aaron, Gaines was the best thing since sliced bread. Almost right after the ink dried on the Gaines election, he became public enemy number 1. Don’t believe me? Check his blog, post after post about the Gaines family.

Beth Gaines, Aaron was all riled up that she ran and won her husband’s old seat. Aaron screamed she was unqualified, nepotism, etc. In most ways Aaron was right, but let’s take a look behind door #3 here….

Megan Dahle, wife of now State Senator Brian Dahle, check the blog again, Aaron had no issues with her being elected to follow her hubby under the same circumstances. Looks like she doesn’t exactly hold major qualifications either?????? Aaron…I’m hearing crickets from you?

In the 2015 special election you supported Don Wagner over John Moorloch, and I understand why, as I supported Wagner as well. However you referred to him as “Moloch” a pagan god of human sacrifice. This coming from a man who “claims he is a Christian first, and conservative second.” May I ask if you have ever actually read the Bible? That alone is horrific and the fact you wrote it over and over is astonishing.

Have you ever read your own posts? Not to proof read but for the actual personal attacks? They all settle on womanizing, drinking, or not being ideologically pure enough. Newsflash you moron, people can have a drink and not be an alcoholic, I swear you AA graduates are the worst of the lot. As far as your womanizing attacks go, funny how you left Duane Dichara unscathed on that one, with you even going as far as calling him ethical! LOL As far as your ideological attacks, most of the time you are so far off base its laughable. These are literally his only attacks folks, he either lacks the mental capacity to think of other ones, or runs his life like he runs a campaign, same old box of tricks each year.

You complain and whine constantly about the lack of paid campaign jobs you have received lately….maybe because no one likes you. I heard you did great work re-electing Harmeet Dhillon as National Committeewomen to the CRP….oh wait, that’s right you were not allowed near it, probably because she wanted to win! I actually have it on record that you are a laughingstock inside the CAGOP headquarters, they have screen shots of your blog trashing Jessica Patterson, then going on an apology tour after she got elected chair. Your chances of a campaign consulting gig went from zero to piss off.

Aaron you exhibit patterns of behavior that any medical professional would say are signs of a psychopath. You peaked when online blogging was invented as you can now make anonymous posts about any and every one with whom you have an axe to grind. However you lack the material or the state of mind to do so and make any impact. Also think about the high number of folks you have run out of your life on a rail over very small squabbles! Tom Hudson, and Charlie Schaupp are just two of them. Best friends you were, you even helped Charlie run for office, yet you attack them on personal matters so far out of bounds; you can’t even tell you’re turning other folks off to you. Also you seem to get the police/FBI called on you far more often than anyone I know…maybe find a new schtick? Or get a life outside of politics? Or find an actual hobby?

Aaron get some help and take a long hard look in the mirror. You are a dumpster fire in the worst possible way. Your attacks on Victor Behket were despicable. You trashed that man, who by the way was running for a local office not even a partisan one! You trashed Celeste Greig, and Karen England…all for what, simple political disagreements? You blame every campaign you’ve been against at stealing your candidate’s signs; however, I have first-hand knowledge that you have removed far more of your opponent’s signs over the years! Come on Aaron, it’s over.

Kirk had only one friend left, and he hired you to do his dirty work, congrats on failing spectacularly. Oh hat tip to you on the robo call from the Democrat operative in the area, while others say that reeked of desperation, you’re dumb enough to have thought it would work!

It’s not too late to remove all those old posts Aaron.

PS who can ever forget you and your loser brother George sitting front row at a Jeb Bush event in Reno way back during the presidential primary…ouch, bad look for you two “conservative brothers!” Before you try to spin the tale, the only folks allowed to sit in the front row are large money donors.