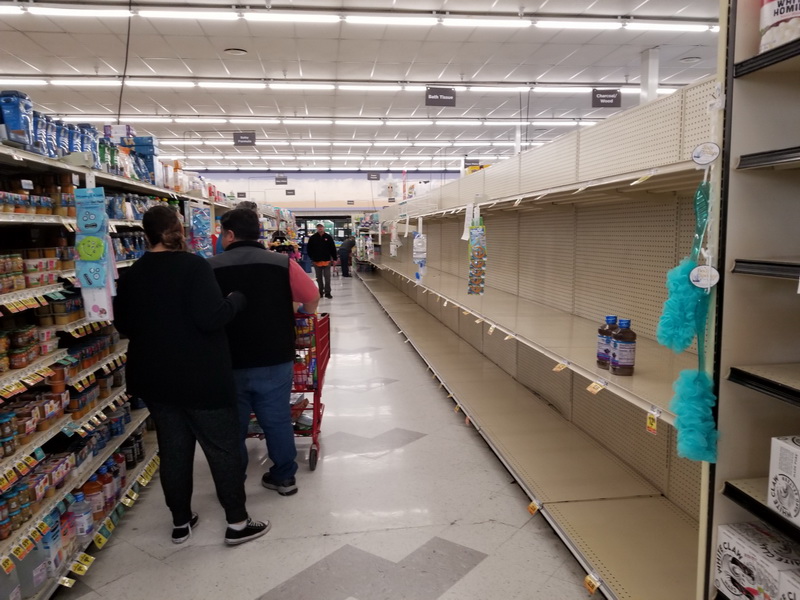 China’s newest gift to the world, the dreaded Corona virus, has finally caused a level of disruption in my life. It started on Monday as I stopped at the Save Mart grocery store located near my office. I happen to get there most days about 6 AM which is when they open. I typically buy one beverage item on my way to work. This week, I have been greeted with hoarders each day. As the week goes on, their numbers have increased. I estimate that today there were 60 to 70 people there to greet me. All self-check-out lines were purposely down to keep people from breaking the hoarding rules which are enforced at the cash registers. Last week, when they opened, there were only two or three folks in line counting me. I’ve never seen grown humans so excited about toilet paper in my life.

Also, in the last week, our church threw in the towel and cancelled all services. The church has many elderly members but good grief, this is ridiculous. They hope to hold services on Easter… like you better. Meanwhile, if you know a good set of catacombs anywhere, I’d be interested in going to their services. I thought we had faith not fear. See what happens when you get shaky on Predestination and Unconditional Election? Oh well, guess it wasn’t meant to be.

The last few days at work have taken a turn into the Twilight Zone. Note to self, don’t say, “it’s just a bad flu” in the presence of a room full of state workers that get their news from cable TV providers. It’s a most unpleasant feeling when they glare at you for trying to talk sense. Anyway, management is trying to implement “social distancing” by reducing the number of people in the office at any one time. Thus, they are having us work six hour shifts and then work from home for the remainder of our day. Please understand that logic and common sense take a back seat to this random directive. If you can imagine working in an accounting office with no access to your files or accounting program. We are given nothing to do at home but watch the email box for three hours at a time. No fears. We get a full check while all this going on.

The wife has it worse. Earlier this week her district cancelled school for the rest of the year. Today in a joint release, the district and their union not only told teachers that they can’t provide their children with learning opportunities—many of which are currently free on the Internet during this current social upheaval—but if any teacher knows of a fellow teacher that dares to try to help their students learn during this extended break, said teacher is to be reported by other teachers so the violator can be disciplined. Yep, we got it in writing. Teachers who try to continue teaching will be punished. Caring forbidden, conforming mandatory. Welcome to California. For those keeping tally, just another reason to leave the state.

Contrary to the instructions of the County of Sacramento and Governor, some of us boys met last night at a local “speak easy” to shoot the breeze. I think our group was below the current gathering size eligible for the automatic death penalty—currently set at ten individuals. The topics didn’t really matter, it’s just getting out of the house for our regularly scheduled gathering.

Short of the governor declaring martial law or California falling into the sea, the family will be taking a road trip in the coming months. We will get to see if the rest of the country is as worked-up about this illness as are people here in California. I have heard mixed reports on whether this is the case in other parts of the country.

Folks my most immediate gripe has been the difficulty of finding eggs and bread in the pillaged grocery stores in this part of Sacramento County. We’re not greedy, we just want our usual breakfast on Saturday morning. Last night, after half a dozen trips to various places, I finally scored a dozen eggs. Thanks, Chief for your personal recommendation and direction in guiding my quest. I’ve purposely not hoarded anything but try to buy only what I need and live life as normally as possible.

Panic and worry are not on my radar over this Corona virus. I think thousands of people are walking around with it and have no symptoms. I base that on the number of celebrities, sports figures, and politicians that are getting it. They only know because they have doctors that can use their patient’s station in life to get a test. Those of us with McDonald’s medical plans (talkin’ about you Kaiser) are just fighting over scraps. I think most folks will never know that they had it and that’s probably for the best.

Frankly, unless you’re in a high-risk group, this whole thing is as overblown for most of us as Y2K. Lest you think I’m just saying crazy stuff, take a look at the Bloomberg news article about deaths in Italy. Over 99 percent of the people dying had preexisting conditions.

More than 99% of Italy’s coronavirus fatalities were people who suffered from previous medical conditions, according to a study by the country’s national health authority.

99% of Those Who Died From Virus Had Other Illness, Italy Says

The new study could provide insight into why Italy’s death rate, at about 8% of total infected people, is higher than in other countries.
The Rome-based institute has examined medical records of about 18% of the country’s coronavirus fatalities, finding that just three victims, or 0.8% of the total, had no previous pathology. Almost half of the victims suffered from at least three prior illnesses and about a fourth had either one or two previous conditions.

The average age of those who’ve died from the virus in Italy is 79.5. As of March 17, 17 people under 50 had died from the disease. All of Italy’s victims under 40 have been males with serious existing medical conditions.

Folks, people in Italy smoke like chimneys, so many had compromised respiratory systems. Italy is also the “Florida” of Europe. Many people choose to retire to this country. Italy has a climate similar in many respects to California.

Again, for the vast majority of us, this virus is just an inconvenience. I think we could have dealt with this without putting the economy on hold and citizens under house arrest.

Today, people at work were asking me if they should be afraid of the police stopping them and whether they risk going to jail just for being outside of their house or driving to and from work.

It doesn’t help when the guys on the radio during my morning commute were joking about being issued passes proving they work for an industry designated as critical in case police ask them for papers while commuting to work.

Are we really that far gone? I hope not.

Anyway, have a good weekend.