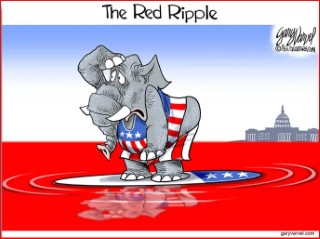 Well that kinda sucked last night.  I was told by the media, even the left-wing ones, a red wave was coming. It was just a matter of how big.  The talking heads were saying GOP House with a 30 seat majority minimum, and a GOP Senate with a majority of 3-4.  Well, here we sit Wednesday at around noon, and we are at a House gain of 7, and a Senate loss of 1, and losses at the governor level of 2 so far.  This is the opposite of a wave; in fact it should be deflating.

Sadly, as a former card carrying CAGOP member, I am quite used to this feeling.  The wave never touches CA yet we were always told about the great hope that it would.  Our guys were going to do it, this was the year…etc.  So, the feeling, like I said, was nothing new.

So I will break down my commentary on winners and losers from last night.

Winner:  Ron DeSantis.  No question he is the frontrunner to take on whomever the presidential nominee is from the Democrats.  A 20 point win in Florida is what he needed.  Keep in mind 4 years ago he won by about 1%.  He also became the first GOP governor to carry Miami-Dade County since Jeb Bush.  Miami-Dade is mostly Spanish speaking mind you.

Loser: Dr. Oz.  This guy lost to a clown who can barely speak after having a stroke and who spent most of the campaign in his basement.  Oz also has a very questionable background of supporting; gay rights, lbgtq, puberty blockers, and just flat out being a shill who lives in New Jersey. Oh, also isn’t he a citizen of a Muslim country (Turkey)? This was a loss we couldn’t have, and he lost it.

Winner:  Lockdown governors.  Whitmer, Evers, and Walz all from the Midwest, all won fairly convincingly.  I guess these folks like being in a nanny state?  Amazing to highlight the difference in DeSantis winning by 20% supporting freedom, and these folks winning while locking down.

Loser: Certain down ticket races.  More on this in a minute, but look at those Midwestern states mentioned above, add PA, GA, AZ, and a lot of House seats were left on the table.

Winner:  Partisan politics.  No major wave in either direction, major politico types sent packing over Roe v Wade or other far out policies. This country is evenly divided, and it appears the Senate and House will reflect that as well.

Loser:  Trump.  I am actually starting to get off the Trump train.  Before you call me a bandwagon type or a fair-weather fan, I’m getting tired of his act.  He raised over 200 million and spent almost none of it.  This was a chance for him to get a coalition started for his next run.  He missed badly.  Even worse he endorsed and shepherded through some very average candidates.  Pure speculation on my part but I think any other candidate than Dr Oz, Herschel Walker, Blake Masters and Dan Bolduc (ME) would have done much better.  Even Trump supported folks who won badly underperformed.  Look at OH, the governor won by about 26%, Trump endorsed JD Vance won by 7.  In NC, Ted Budd won by about 5%.  In AZ Blake Masters is tracking about 10,000 votes less than the governor nominee is currently getting.  In PA his governor nominee flopped so badly it likely took Dr. Oz down in the undertow, at time of this writing the GOP governor nominee was at about 42% of the vote.  Oh BTW in Colorado Trump was so angry at nominee Kevin O’Dea in the weeks leading up to the race he said O’Dea shouldn’t win and called him a RINO.  O’Dea lost big, and Trump crowed on his Twitter clone, not a great look.

Winner: liberal policies.  Crime and law and order were on the ballot everywhere, and the Democrats won all the left leaning states.  So look for more homeless and more crime in these regions.  It is what it is I guess.

Loser: GOP messaging.  Which was what exactly?  I’m being serious.  It sounded like the same old same old, no taxes, less spending, put us in charge and you will find out.  I heard no answers to the crime issue, none on the inflation issue, and I think the vote reflected that.  You wanted to have your own congressman/senator back and let them continue the fight.  If the GOP doesn’t figure it out on a national level and soon, they will be like the CAGOP, essentially a regional party who serves as “loyal opposition” as opposed to new ideas.

Editor’s note: Trump’s endorsement of DR. OZ was the stupidest endorsement that he ever made. He lost much credibility with me on that one. It even caused me not to contribute money to him anymore. Left that sink in just little. I’ve been supporting him since before he won the Presidential nomination, something few in California can truthfully say. I haven’t been a major donor, but I have given a few contributions since he became a candidate. Endorsing Oz really crossed a line for me.

Kevin McCarthy is not, nor ever has been, a conservative. He has a multi-decades long track record of opposing us and our ideas. He is the RINO’s, RINO. He is on the wrong side of almost any social issue that I or fellow Christians believe or care about. He’ll change his spots to appear our ally but beware. Mitch McConnell seems the same type of political animal; just enough change of beliefs to stay in power. For men like them, its about gaining and expanding power not doing what’s best for the country.

There was no GOP coalition to oppose Biden. All we got was the same old crap (smoke and mirrors) as “repeal and replace” with a lot less believability and only after internal polling showed the insiders that there was no Red Wave. It was a psyop to keep the Fox News faithful on the reservation.

The best we can hope for is two years of gridlock.