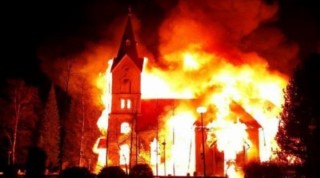 As has been my habit, this week I went to the twice monthly Theology on Tap. It’s a Thursday night men’s gathering at a local watering hole that is sponsored by my church and usually attended by our pastor. The Pastor decided to read a passage in Psalms about trusting in God as opposed to men. I’m not sure of the reference—not that it matters—but it was something like one of these verses.

Put not your trust in princes, nor in the son of man, in whom there is no help. Psalm 146:3

Some trust in chariots, and some in horses: but we will remember the name of the LORD our God. Psalm 20:7

He used the verse as a springboard to bring up government and politics. As you might expect, things went really sideways from there. Folks, it was the most horrific display of biblical illiteracy that I’ve seen in many years.

Those in attendance maintained that government was an invention of men and God could care less about it or what it does. It was just another societal institution composed of corrupt men. Which by the way is ok, as long as they leave us Christians alone and don’t force us to do stuff we disagree with; not that anyone could cite an example of what that might be. (Apparently closing churches, telling us whether we could sing songs during a worship service, or when and how to have Holy Communion is not crossing that line.) Furthermore, they asserted that the Bible is mute on how we should be governed by the State.

Folks these were not a bunch of pagans in the local biker bar trying to tell me why religion is dumb, these guys are the leaders of the church and regularly attend weekly services, and most have done so for years on end.

Wow. Truthfully, I got so angry that I left before it was over.

I thought every Sunday School kid knew that God created government. Its right there in Genesis 9, if you know what you’re reading. The proposition that man created government is usually credited to Thomas Hobbs or Jean-Jacques Rousseau. That this idea was allowed to stand for the hour and a half of discussion that I endured is shameful.

Most were in agreement that the Bible has nothing to say about “How should we then live?” (title of 1976 book by Frances Schaeffer). To say this group was antinomian and hostile to what the Bible has to say is no exaggeration. Any believers that would look to the Bible—particularly the Old Testament for guidance as to what God expected of government—were denounced as advocates of tyranny, inquisition, theocracy, and Roman Catholicism. Aren’t those the accusations normally leveled against Christians by liberals, pagans, and humanists?

I couldn’t get anyone to agree to the proposition that God is sovereign, ruling the nations now, and that all authority is under Christ. I said that God has appointed all authorities and will judge them and hold them to account. Not one agreement from anyone in the room.

I also stated that we don’t live in normal times. We are under God’s judgement. One person asked if that was the nation as a whole or Christians in particular? I said both.

Oh, the other zinger that was loudly and repeated stated, the United States was not founded as a Christian nation. I guess the first 200 years or so of our history were irrelevant, at least to this know-it-all public school graduate.

Finally, they got around to bashing Donald Trump—who last I checked didn’t claim to be a roll model of virtue or Christian excellence. Trump was bad because he called people names and had been married more than once. Zero complaints about the Party of the KKK, Jim Crow, Trail of Tears, abortion, homosexuality, slavery, etc.

Other than to invoke a Lutheran prayer that the government leave us alone—“That we may live a quiet and peaceable life in all godliness and dignity” —and a reading of Romans 13, there was crickets from the pastor.

(I would expect this discussion from a female Methodist priestess and her congregants but a supposedly conservative clergyman and his leadership team, yikes!)

The only thing others said that I agreed with last night was if you don’t like it then move to another state. Thankfully I’m doing just that in a few months, God willing.

Folks, please understand that these guys see themselves as Godfearing Christians, good fathers, and Conservatives. If you want to know why your state is moving liberal and you have California Conservatives in your midst, maybe you can see a pattern here. They would rather be ruled by godless humanists, atheists, and pagans than by anyone using the Bible as their standard of Law and Ethics.

I got to see a microcosm of what’s wrong with the Church in America, or some of it anyway. It was heartbreaking. I’m not sure that I have much interest in going anymore.