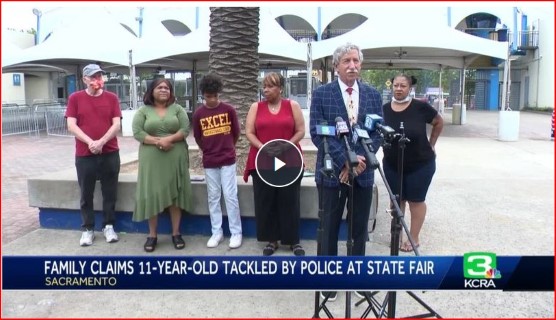 Check out this whopper of a story transmitted by KCRA 3, the local news channel in our town. “Elk Grove family claims 11-year-old was tackled at State Fair, asks for termination of officers involved”

An Elk Grove family claims that 11-year-old Elijah Hunter was tackled by police at the California State Fair last week on Kids Day.

Hunter’s family, their attorney, Black Lives Matter Sacramento and the Greater Sacramento National Association for the Advancement of Colored People (NAACP) gathered on Monday saying that his civil rights were violated and they’re now asking for policy changes regarding security at Cal Expo.

Cynthia Martin, Elijah’s mother, said in a news conference that his shirt was covered in blood.

“They [Cal Expo police] knew that they injured him because they provided the first-aid before we even made it to Kaiser hospital, where he received further treatment,” Martin said.

Just think about that for a minute, no actual reporting just releasing statements from BLM, NAACP and the victim’s family and attorney.  Notice they make it clear they want people terminated.  Notice the bolded words of “covered in blood” more on that later in the article.  By the way, if officers injure someone, even shooting a criminal they have a duty to attempt lifesaving measures until fire/ambulance/etc. personnel show up.

Looking at this article it would appear this is Rodney king part 2 electric boogaloo right?  Wrong.

But, in a statement to KCRA 3, Darla Givens, a spokesperson at Cal Expo, said the youth only suffered a small cut. Givens also added that police were called about a child attempting to steal items from fair vendors, climbing over a safety fence and almost being hit by a roller coaster ride.

Ahh, now we get clarity our little saint was trying to steal items from vendors, jumped over a safety fence, (those are usually about 6 feet high mind you) and almost was hit by a roller coaster.  This coming from Cal Expo officials not the police mind you.

However, advocates like Betty Williams, who is the president of Greater Sacramento NAACP said that nothing excuses the behavior of Cal Expo officers toward the minor.

“What makes him different from any other 11-year-old? I’ll tell you what it is. He’s Black. He’s a Black man, a Black male. It doesn’t matter your age when it comes to this society and law enforcement. You are treated differently,” Williams said.

Sorry, officers taking down a person has nothing to do with whether they are black, brown, Asian, white, or any other color.  Your son was acting a fool and so out of control officers were forced to take him to the ground.  Sounds like his safety was at risk, I’ve never gotten so close to a roller coaster it almost hit me.  He was trying to steal items…. he was being a punk and a thug.

Oh, check this out little thug’s parents were even there that day…

The family and attorney are also concerned about a document that they say Elijah was forced to sign without any family members present.

Cal Expo officials said that when their policies are violated, fairgoers are asked to not return and sign a document agreeing to such.

Sure, I guess the little thug wasn’t 18 yet, but regardless he will be perma banned from Cal Expo since he cannot follow basic rules, like don’t act like a criminal.

But what upsets me most here is this is the last paragraph of the article, buried at the end mind you…

KCRA 3 asked the family for photos of the injuries, but they refused to provide those. However, in photos that they sent to KCRA 3 last week, he had a bandage on one of his elbows and a visible blood stain on his shirt about the size of a nickel.

Hmm, the family won’t provide photos?  That’s odd.  His shirt was covered in blood I thought?  I figured he was a disjointed mess?  Beat up so bad his body would require multiple surgeries?  Well, I guess this wasn’t Rodney King part 2 after all.  Once again, it’s a sad story of a young thug causing trouble, not following orders who got the business from a police officer or two.  I’m sorry but if you run, and it sounds like this thug did, they will be tackling/tasing/taking down you.  The sad part is he seems to be a young man with no family in his life, who lets their 11-year-old go to the fair unsupervised?  Sounds like zero family was around as they objected to him signing a form banning himself from the fairgrounds permanently.  Maybe if parents were there this would have all been avoided?

Bottom line this is irresponsible journalism at its finest, notice how they make the incident sound like he was beaten within an inch or two of his life?  Only to at the very bottom in essence refute that?  Why do they get statements from the parents, NAACP, and others but ignore the police organization?  This is because they can create a false narrative of “white police, black victim” when in reality it was a thug acting out, running away, and then being finally subdued.  This is how false narratives of “hands up…. don’t shoot” get started.

The good news here for the family is they will likely get a 6-figure settlement, it’s what we do here in Sacramento, crime pays.  Then the incident will go away.