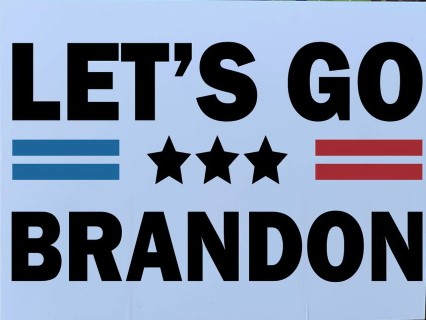 I was minding my own business today when I saw this story. Personally, I think it’s funny, but the feigned outrage is priceless. How dare anybody challenge the orthodoxy of Liberalism, especially here in California.

MODESTO (CBS13) — A Stanislaus County resident is demanding answers after she and hundreds of others received an official tax letter in the mail stamped with “Lets Go Brandon.”

“This is taxpayer’s money, and they’re using this derogatory stamp to show what somebody thinks about it, and we’re paying for it. It’s just not right,” Boese continued.

County officials say the slogan ended up on roughly 544 pieces of mail.  But how does a political slogan end up on official county business envelopes?

He says ABS Direct, a contractor, printed the envelopes in error and has since apologized. Gaekle says the county not only doesn’t condone such messages, but he says they don’t belong on official government business.

“How could this be a printing error? It’s stamped on every envelope on the back,” said Boese.  “Somebody needs to realize this was illegal, and it’s just not good.”

“Let’s go Brandon” is a euphemism for the most vulgar put-down you might imagine aimed at President Joe Biden. The accidental slogan was quickly adopted by his critics on the right smirking at what they deem to be a clever insult lacking profanity while evoking it. The left is understandably appalled.

How the slogan ended up on the backs of tax-related envelopes from our own county offices is almost beside the point. It’s enough to say it was a carelessly egregious mistake, one made by a firm contracting to send mail on the county’s behalf.

So, if one part of government attacks another, even by accident or via a rogue contractor, we get outrage but if government wants to attack the most innocent and vulnerable in our society, or refuse to punish criminals and protect citizens, or solicit money to fix water storage and spends the money instead on bike paths and carpool lanes then we get crickets?

I get that even if I agree with “Lets Go Brandon” which I do, I have even worn a shirt with the statement to church on a few occasions, it probably doesn’t belong on official correspondence. What is surprising to me is how widely this story is circulating (it is theoretically a national story now since it’s carried on MSN.) Again, the outrage is greatly disproportionate to the offense of having it stamped on 544 pieces of mail.

By the way, what kind of county tax mailing goes to only that amount of people?

Are they deadbeats that didn’t pay taxes?

I can see this going two ways; first, the Lets Go Brandon controversy might bring more attention to the tax letter causing more people to pay and thus increasing county revenue or perhaps, since this is California, a taxpayer goes to court and gets the warning letter tossed as unofficial government correspondence due to this unauthorized message on the letter and thus they are given a pass on having to pay any tax associated with the letter.

Why not, Gavin gave free water, sewer, electricity, and rent to renters in California for 18 months with no compensation to utilities or property owners just because he said so. This is an offense that no media company has taken up or made any serious complaint about.

BTW Gavin still has all emergency powers given to him at the beginning of Covid and can shut everything down again on a whim anytime he pleases. Thus, he is essential, all the rest of us are not. Oh, sorry, no media outrage over this abuse of power either.

This latest iteration of Lets Go Brandon is yet another illustration of the brokenness of our people and institutions in the dystopia of California.