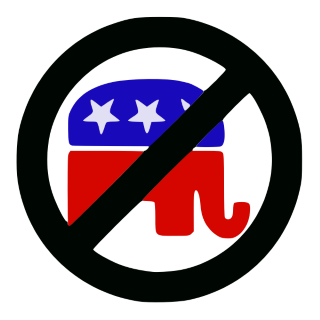 The rumors are true, this past week I re-registered to “Libertarian.”  If you know me, you already know I am a Libertarian, but I caucused with the GOP.  I only voted for 1 Democrat in my life prior to this election, that was Sacramento County Supervisor Don Nottoli.  I am not going to grandstand and claim the party left me.

Truth is there is no Republican Party in California.

For years the party has been in a free fall.  Tribalism took over and poof, we are now a super minority.  I see that Chad Mayes, the former GOP leader, is still in the Assembly as an independent.  Mayes is known for being a sorta Republican who loves tax hikes.  Would be nice if the GOP could beat him, but why bother.  Frankly he fits in perfectly.  On each vote there is inevitably 3-4 GOP members who vote with the Democrats so it can be called a “bi-partisan bill.”  Barf.

The party brand is toxic here.  Just look at Sac DA Anne Marie Schubert. She used the party to get elected, then dropped us afterward.  She got obliterated running for AG, but the point is, she used us until it was no longer necessary.  Ditto for Pat Hume, the lazy EG councilmember, who will get slaughtered in November because he never wants to put in the work.  The GOP endorsed him, but he refuses to use the logo.  He was in a 4-way race with 3 Democrats, and if he achieved 50% plus one, he could have won outright.  Hume also supported the tax measure on the ballot, and supported the sales tax increase a couple cycles ago.  But that’s ok…. he is a Republican!

The county party here is a joke.  I mean Sue, Terry (RIP) and others were a circus, but this crew is a straight up joke.  I got an email the night before Election Day saying Sac County GOP recommends you vote this way.  Yup, I got my ballot 6 weeks prior at least, and had already returned it.  We do all our voting by mail in CA, these idiots just do not get it.  It told me to vote Barnes for sheriff, he lost, write in Sue Mason for her race, and that if I couldn’t drop my ballot off someone could come pick it up.  Yeah, read that again, the GOP called that ballot harvesting a couple cycles ago.  Good luck trying to sue over that now.

The top 2 primary has killed off all non-democrat parties.  I don’t even need to say anymore here.  Too bad the GOP supports it.  I think a lawsuit involving all non-democrat parties gets the top 2 overturned.  Congrats on being on the wrong side of history GOP!  In November I get the choice of Stephanie Nguyen or Eric Guerra in one race, and Dave Jones and Angelique Ashby in the other.  Neither race features a GOP.

The GOP had zero endorsements on my voter guide.  See the troll blog for more on this disturbing factoid.  Bonus, the GOP voters are crying as very few of their “candidates” made it through to November.  Shocking I say, shocking.

Recruiting failures.  Let’s look at BOE district 4, a former GOP seat, there stands a very high likelihood 2 Democrats make the run-off.  5 GOP folks split the vote, allowing this debacle. In SD 4, 6 GOP folks allowed the Democrats to both advance to a run-off.  Minority leader Scott Wilk (a GOP) spent money on one of the Democrat candidates that won in this highly Republican area. Face it, minority and leader are two words that never belong together. Idiocy rains supreme here.  The GOP has one option to win in November, Lanhee Chen is the best chance.  I have it on record that in a couple statewide races the establishment GOP recruited a challenger just to deny someone the chance to be in the top 2.  WTF?

So, to conclude, the GOP is dead here, so I won’t be wasting anymore of my time on it.  I still vote GOP as the lesser evil, but I cannot continue supporting a party that is lost.  It’s sad.  I voted for Democrats; Steve Glazer (he lost), Dave Jones, and Steve Ly this time around.  I won’t be doing that anymore unless the GOP requires it.  In the races between Jones and Ashby, Nguyen and Guerra, I will have to.