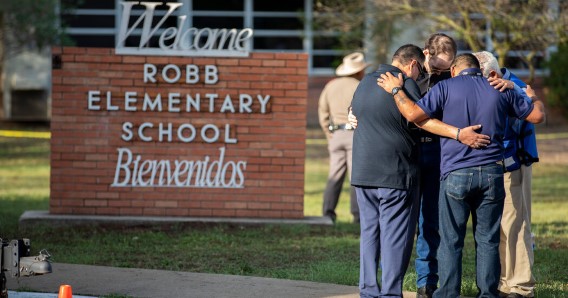 Very sad day yesterday, at this moment we know of 19 children and 2 adults who are deceased.  I believe it was reported two police officers were injured responding.  It takes a very sick human to shoot up an elementary school, but let’s just ignore all those facts and go straight to the left wing’s response to this.

My mother had the Clinton News Network on as I arrived at their house and predictably, they fired up the official democrat response to the story.  They wheeled out “political panel” David Axelrod and another democrat hack.  Of course, Anderson Cooper made no mention of Axelrod being Obama’s former campaign manager, that’s immaterial.  Axelrod proceeded to run-off every democrat talking point they use in regard to mass shootings, gun control, far right state, etc.  Cooper of course never intervened as he was likely told this is the narrative democrats need to win.  They highlighted it was in a minority community and in republican red Texas.  Cooper never mentioned the shooter was Hispanic, because that doesn’t fit the narrative.  Calling Axelrod a political commentator and Cooper a journalist is an oxymoron and likely the reason exists no one watches them.

It gets better from the democrats.

Congressman Ruben Gallego of Arizona thought it would be a good idea to take to Twitter to rip Ted Cruz.  Yup he called Ted a baby killer, yet Gallego will abort any fetus at any time.  Gallego then ripped Darrell Issa and went after fellow democrat Krysten Sinema.  Congressman Gallego needs a lot of help; he is a deranged human who lacks any self-awareness.  The carnage was not even known, and this human decided to fire up Twitter.  By the way congressman saying “we are sending prayers” is a self-aware thing to do.

My take is the following on this.

First of all, this never should happen, especially at a school.  This issue now has our children becoming pawns in a game of political football.  First isn’t it refreshing the same people calling to defund the police now suddenly want guns off the streets and cops in classrooms?  Actually, rephrase, they want people who legally own guns to turn them in.  So, when in case of emergency, we call 911 and wait until they get around to responding?  Maybe we should refund the police?  Sorry the good cops already left for more friendly pastures.

Social media is a large part of the issue, kids now do not have friends, they have “friends;” folks they have never met and hardly interact with except via looking at each-other’s tweets, Instagram, or the like.  We no longer have a human connection.  We have created hot take machines who do not need to show/reveal their true identity.  People can bully one another with zero consequences.

Politics are a bigger cause.  We need to turn the temperature down about 40,000 degrees.  This idea of news shows being politics 24/7 is destroying our very core.  Neither side is willing to give an inch on a single issue, if you move slightly or flinch, you will be primaried.  Also rid us of the 2-year election cycle, this makes it so issues must be addressed.  Also stop doxing people!  Giving out addresses of political types or judges in against everything this country is supposed to stand for!  It is no true wonder politics is filled with scum of the earth types.

Video games.  It used to be you were the police or friendly army shooting at the criminals or the bad army.  Now the tables are flipped, Grand Theft Auto and other games make it so being a criminal is cool.  With a goal to kill as many police as you can.  The lifestyle is glorified.  Ban these types of games.  They are not needed and serve no purpose.

We need family again.  Most are born to single parent households.  The father chose to walk away, and mothers have chosen the opposite route; shielding the baby daddy from any responsibility and not allowing him to see his son.  Caring is not a bad thing, having a lover (mom) and a teacher (dad) is the best way to move forward.

Quit the self-blame/victim culture.  Your life isn’t bad because of _____ we need to make comments about how this is the greatest country on earth and if you get your lazy a** up and work you can do quite well for yourself.  We have now become a group who blames everyone else.

Quit bailing out family/criminals.  If you are arrested hold their a** in jail for a bit.  We bail them out, or release and they commit more or worse crimes.  Toughen the crime laws, not weaken, do not end cash bail.

Additionally, please answer me this.  We give criminals 3 squares and a cot, as well as protection while in the joint, no one blinks an eye.  Yet if you have major mental health issues there is nowhere for you to go, so you go out on the street. Maybe we should allocate money for these hospitals as opposed to homeless tents?  Most of the time the mentally ill live out there with zero help.

We need to understand you have the right to bear arms in this country.  No one I know responsible carries themselves like Rambo.  The criminals and mentally challenged are the problem.  Notice at the recent shooting in downtown Sacramento, the criminals all had gang ties and illegally modified guns.  Focus on the word illegally.  Taking innocent people’s guns away is cruel and not right.

We also must rethink security at schools.  Ask yourself why we don’t have mass shootings at a courthouse or government building?