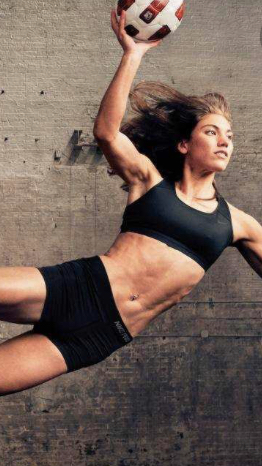 Friend of the blog and legit crazy person, who used to double as the goalkeeper of the women’s USA soccer team, Hope Solo, announced she has entered alcohol rehab Friday.  Solo is a decorated member of the soccer team, but also has had more than enough run-ins with the law.  This is a very good positive step; I am saying this because she was the best goalkeeper in women’s soccer history.

Here is a look see at Hope Solo’s rap sheet.

6/21/2014 she was arrested for a domestic dispute involving her half-sister and nephew.  The carnage was so bad Sen- Richard Blumenthal of Connecticut sent a letter to US soccer blasting them for not taking the charges seriously.  The charges were later dropped.  Solo was quite intoxicated that night.

1/19/2015, While it was her husband (compete dirt bag former NFL player) Jeremy Stevens who was arrested for DUI, he was driving the women’s soccer van, with Solo in tow.  The van was not supposed to be used for non-team events.  Rules don’t apply to Solo.  Solo was very intoxicated, I will give her credit for not driving, but being a passenger in a car with a drunk usually doesn’t end well in a crash.

3/31/2022 Solo was arrested for DUI when police found herself passed out in a Wal-Mart parking lot with her twins in the backseat.  Yikes.

While I understand folks will say she made a mistake, or what not, it shows a pattern, and a bad one at that.  The domestic violence is a major problem, likely fueled by alcoholic rage.  Being a DUI passenger in the team van shows a massive judgment error.  The last one however is indefensible.  Being passed out drunk with your two young offspring in the car is horrific.  This usually leads to divorce or separation instantly; I mean think about it.  You couldn’t wait until you got home?  Of course, not you are a drunk.

That all being said, the point of this blog is not to go after her, she made a very wise choice.  Choosing to enter rehab as a public figure is tough, as scrutiny will follow.  She is smart to get out in front of the DUI charges as judges tend to look favorable on choices like this.  We here at the blog wish her the best, she was unceremoniously kicked off the woman’s soccer team and was drug through the media for seemingly every mistake.  The only advice I would give her, be a better wife and mom, your kids need you to make good choices not horrible ones.

Alcohol and drugs are destroying the lives of many, and yet this country wants to make it easier to gamble?  Sheesh.

PS in an ode to Troll, Hope is pretty hot, and she has “cray cray eyes” basically meaning crazy in the head = crazy in the bed.