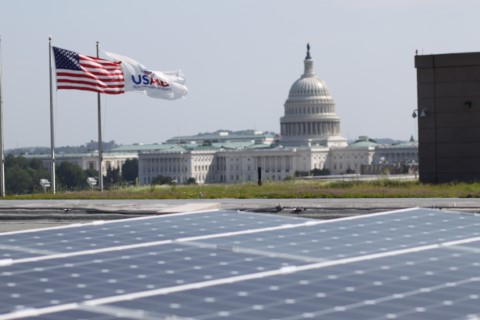 California is changing the bargain it made on solar power. Yep, if you want to be cynical, you might believe that the Public Utilities Commission has decided to hit Elon Musk in the pocketbook but they’re really coming for you Barbara.

Ok, so let’s get the chronology correct. California has shutdown every sort of electrical generating capability in the state except wind and solar.

California has also mandated that all new construction beginning in 2024 must include solar power.

Now, like Nevada did a few years ago, California has significantly altered the bargain.

At a recent PUC meeting, a taxpayer dared to complain, “I thought we had a bargain.”

To which the PUC chair replied, “I am altering the deal. Pray I don’t alter it any further.”

So, what changed? California now has a new revenue stream. Remember that imaginary budget surplus Gavin says we have for the second year? Apparently, he doesn’t either.

Yep, gullible people that think they are saving the planet are about to learn that Communism and fixing imaginary global warming has a cost, one that you get to pay, not Mr. Musk.

Enter the California Public Utilities Commission which has apparently decided it’s time to alter the deal. This new plan called Net Metering 3.0 hasn’t been passed yet but is expected to be voted on next month. If it does pass, the state will start charging new solar installations a fee based on the size of their system. The fee is $8 per month for every kW of generating equipment you have installed on the roof. So if you have an 8kW system, you’ll owe SCE an additional $64 per month or over $700 per year. You don’t get anything for that money, it’s basically just a tax on everyone who installs solar equipment.

In addition, the new plan will reduce the amount the power company pays you for your excess energy from about 25 cents per kilowatt hour (still less than what the power company charges you for a kilowatt hour of power) down to about 6 cents per kWh. And that means there’s no way to break even on your bill anymore unless you also install an expensive battery system to save the excess energy for your own use. Of course the batter costs almost as much as the entire system.

The result of Net Metering 3.0 is likely going to be the end of the residential solar industry in California.

We told you several years ago (2016) on this blog that this day was coming. One example is the following: Myth of Solar Energy

If this article makes you angry, you ain’t seem nothin’ yet. Wait until they come after your electric vehicles, complete with the mileage tax; then everyone will get to pay.