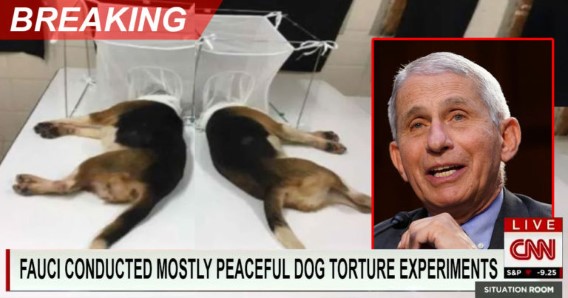 Very few things in the world today make me literally speechless.  I came across this article yesterday and was at a total loss for words.  Yep, believe it or not folks, our all-knowing, America’s Favorite Doctor Tony Fauci is a puppy killer.  Yep, I’ll let the article do the talking for me.

According to documents acquired by a government watchdog group, the National Institute of Allergy and Infectious Diseases — led by Fauci — funded research in 2018 allowing scientists to force-feed experimental drugs into 44 beagle puppies before killing and dissecting them.

The dogs — between six and eight months old — were also “devocalized,” according to the report. The procedure involves the slitting of a dog’s vocal cords as a means to stop barking.

In another instance, live-puppies in Tunisia were held in cages and exposed to sandflies. DeSantis lambasted the research while speaking to reporters in North Venice.

“They’re doing cruel experiments on puppies,” DeSantis said. “What they were doing with those puppies is flat out disgusting. It’s despicable. I cannot believe American tax dollars would go to treat those dogs the way those dogs are being treated.”

Barf.  Yep, the innocent telegenic Dr. who claims the vaccine is just for you among other things, was doing heinous research on “man’s best friend.”  Not only did he infect/kill the dogs, but he also instructed the researchers to cut their vocal chords.  This is straight out of a movie like the Mummy where no one could hear them scream in horror.  The photos are sick, this Fauci is a literal modern-day Dr. Frankenstein.  This is so gross, its reprehensible.  Does anyone now doubt us here at the blog who have been telling you this coronavirus was grown in a lab?  The conspiracy doesn’t seem so far-fetched now, does it?

Dr. Rand Paul, the Kentucky Senator, has been all over Fauci from day 1.  He knows Fauci is a dishonest, little man syndrome having prick.  He gets on TV with that fake used car salesman look (when he isn’t wearing his mask) and tells everyone how self-righteous he is.  By the way, did you see how his NIH institute has been funding gain of function research in Wuhan?  Yeah, you likely missed that too on your favorite cable channel.

But a letter from the NIH to Ranking Member Rep. James Comer of the House Committee on Oversight and Reform Wednesday admitted to a “limited experiment” conducted in order to test if “spike proteins from naturally occurring bat coronaviruses circulating in China were capable of binding to the human ACE2 receptor in a mouse model” – contradicting Fauci’s previous claims.

Folks allow me to remind you, this would not be the first time the good doctor has lied to Congress.  A move that if made by any of us unwashed would lead to jail time.  Yet somehow this evil man is able to continue to peddle his bullshit while telling us to get vaccinated or else.

This is exactly what Donald Trump fought against his entire presidency.  The Bureaucracy in the country has too much power.  These folks just wait out the leaders they do not like.   Fauci needs to be gone yesterday, he helped create this virus and now he wants to keep it going.  He cares only about power.  How else does one describe the endless changes in policy from him?  Mask, no mask, tinder hookups are ok, Christmas is not, Halloween is ok, church is not, take-out is ok, indoor dining is not, vaccine passports, corporate mandates.  Let’s end this.  It’s time.  Fauci is a dog killer and a liar, the worst kind of person.  Just remember Michael Vick got jail time for an illegal dog fighting operation.  I wonder the punishment for literally maiming and killing dogs in the name of science?

In the meantime, back to your cable watching, and be sure to get the booster shot.  Because?  Science, and you better go along or else no Christmas for you!

Oh, lest you think The Chief has left the reservation on this one, even the MSN is appalled by his puppy torture.

Dr. Anthony Fauci, NIAID and the National Institutes of Health as a whole have been under intense scrutiny in recent months over what types of animal testing should be funded with taxpayer grants in light of questions about gain of function experimentation at the Wuhan Institute of Virology.