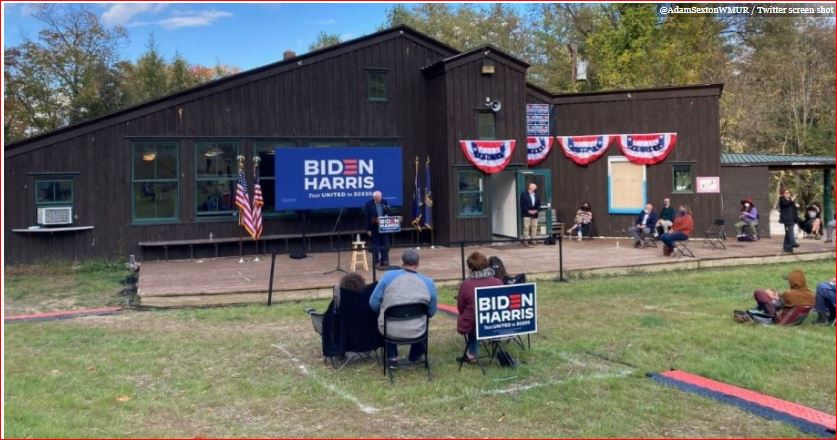 Yes, folks they are still counting ballots and digging up inconsistencies on the Biden/Trump election. Periodically I provide updates on the malfeasance which occurred. However, unlike Mike Lindell, I believe there is no chance in hell that Trump will be back in office by the end of August due to a series of court rulings of other miracles.

On a recent call, the General Counsel or the California Republican Party claimed there was NO fraud or corruption in the November 2020 election in California.  The CRP Chair, Jessica Patterson has not refuted that claim.  By NOY suing to stop live ballots, 440,000, going to dead people and those living outside of the Sate, the California Republican Party has normalized corrupt elections in California.  We also found that 3500 Californians voted in the November election is California and Nevada—but neither government nor the GOP can find any corruption.  Now this:

“Approximately 3,000 mail-in ballots counted in the Nov. 3 election were supposedly cast by UCSB students residing in a voting precinct that, along with other dorm buildings, includes the Francisco Torres/Santa Catalina Residence Hall at 6850 El Colegio Road in Goleta.

Problem: Due to COVID-19, the Torres Building, which normally accommodates 1,300 students, was empty and locked down through most of 2020, as were all other UCSB dorms.

This means no students/voters were residing inside the Torres Building (nor any of the other dorms) during the election season.

It also means these ballots were fraudulent.

Thomas Cole of Analytics 805, which monitors elections, uncovered the Goleta precinct’s voting irregularities during the course of his routine analysis. Alarmed by the phantom ballots he’d pinpointed, Mr. Cole called the Santa Barbara District Attorney’s Office for advice on how to file a criminal complaint alleging Fraud Corruption of the Voting Process.

The D.A.’s Office directed him to the Santa Barbara County Sheriff’s Office.

Someone in charge of the mail at the building illegally filled out those ballots for the students and sent all those ballots directly back to the election board, which is a felony.

Someone in charge of or with access to the ballots and signature machines simply ignored the phony signatures on the ballots returned from the Torres Building, which is a felony.

Or officials turned off the signature inspection machine.

Or officials lowered the threshold of the machine inspection on the Torres Building precinct ballots, thus allowing the approximate 3,000 fraudulent ballots to be counted, a felony.

Only a student actually residing in the Torres Building during October-November 2020 could have received a ballot to vote. And since the building was closed and locked down, that is impossible.

Thus, the 3,000 votes counted from the Torres Building are illegal.

When Fulton County, Ga., poll manager Suzi Voyles sorted through a large stack of mail-in ballots last November, she noticed an alarmingly odd pattern of uniformity in the markings for Joseph R. Biden. One after another, the absentee votes contained perfectly filled-in ovals for Biden — except that each of the darkened bubbles featured an identical white void inside them in the shape of a tiny crescent, indicating they’d been marked with toner ink instead of a pen or pencil.

Adding to suspicions, she noticed that all of the ballots were printed on different stock paper than the others she handled as part of a statewide hand recount of the razor-thin Nov. 3 presidential election. And none was folded or creased, as she typically observed in mail-in ballots that had been removed from envelopes.

In short, the Biden votes looked like they’d been duplicated by a copying machine.

“All of them were strangely pristine,” said Voyles, who said she’d never seen anything like it in her 20 years monitoring elections in Fulton County, which includes much of Atlanta.

She wasn’t alone. At least three other poll workers observed the same thing in stacks of absentee ballots for Biden processed by the county, and they have joined Voyles in swearing under penalty of perjury that they looked fake.

What do we do when it appears, later than we like, that the 2020 election was thrown after all?

The latest story from Just the News is that the Georgia audit documents expose “significant election failures” in the state’s largest county.

“Documents that Georgia’s largest county submitted to state officials as part of a post-election audit highlight significant irregularities in the Atlanta area during last November’s voting, ranging from identical vote tallies repeated multiple times to large batches of absentee ballots that appear to be missing from the official ballot-scanning records,” said the story.

To put it into perspective, the irregularities in predominantly Democratic Fulton County, Georgia, could impact thousands of ballots in a race that was initially certified by fewer that 12,000 votes.

And the real surprise is that Georgia Secretary of State Brad Raffensperger’s own private contractor commissioned the report. He probably lied to “60 Minutes” when he claimed Georgia had conducted its most sacred kind of election.

The memos included the handwritten tally sheets for all absentee ballots counted by the county as well as a private report that chronicled seven days of problems and recorded troubling behavior like the mysterious removal of a suitcase of sensitive election data known as polls pads, used to authenticate voters.

The revelations come as a state judge has taken the extraordinary step of ordering absentee ballots in the county unsealed so that a private audit led by lawyer Bob Cheeley can examine the actual papers and resolve discrepancies. Cheeley told Just the News on Wednesday the evidence he has seen so far points to “election tabulation malpractice.”

Here’s what the record shows:

* More than 100 batches of absentee ballots – each containing approximately 100 or more ballots — were assigned tracking numbers before being sent to one of the five absentee vote-counting machines in Fulton County but are not subsequently recorded in the handwritten logs showing which batches were scanned and counted, raising concerns the ballots may be missing.

* More than two dozen batches of absentee ballots were identified as having been double-scanned as actual votes.

* Five sequential batches of absentee votes each appeared with the exact same vote count of 392 for Biden, 96 for Donald Trump, and three for the libertarian candidate, which defy all odds.

* Many control sheets for absentee ballot batches counted during the state’s audit did not check a box indicating the ballot came from a secure container, raising the possibility that ballots were stored insecurely or that multiple batches of ballots were sealed in a single container.

Led by longtime Georgia poll watcher Garland Favorito, founder of VoterGA.org, the court petitioners say the state has failed to inform the judge overseeing their case that they broke the chain of custody over the pallets of shrink-wrapped absentee ballots warehoused in a locked county facility in Atlanta.

“If the secretary of state’s office did that, they tampered with the ballots and violated Georgia state law,” which restricts the handling of ballots to authorized elections officials involved in the tabulation and care of the ballots, Favorito said. He also noted that Judge Amero had placed the ballots under a protective order in January. “They would have had to ask for a court order to unseal and inspect those ballots and they never did that.”

One state is conducting secret ballot review of 2020 election

The state of Pennsylvania has removed over 20,000 deceased voters from being able to vote following a settled lawsuit filed by The Public Interest Legal Foundation.

“This marks an important victory for the integrity of elections in Pennsylvania,” PILF President and General Counsel J. Christian Adams said. “The Commonwealth’s failure to remove deceased registrants created a vast opportunity for voter fraud and abuse. It is important to not have dead voters active on the rolls for 5, 10, or even 20 years. This settlement fixes that.”

Wishful Thinking from the Faithful

But what about the forensic audits in the key contested states?  Starting with Arizona, then Georgia, then Pennsylvania, then…

The vote-winning margins in these four states were about 1%, or even much less.  Not a whole lot of cheating and theft required to flip the states, if that is what actually historically happened.  With Arizona’s 11 Electoral College votes, with Georgia’s 16, with Pennsylvania’s 20, and with Wisconsin’s 10, if those slim margins went to President Trump rather than Biden, the Electoral College vote would be 289 votes for Trump and just 249 for Biden.  With Trump needing only 270 for the win, maybe that is why the Progressives are so determined that the forensic audits should not happen.  Maybe that is why the Deep State cabal does not want light to shine in on the actual votes last November.

What happens if the election audits go Trump’s way?

Folks, its not that I don’t believe the election was stolen but that nobody will voluntarily give-up the power. If Biden leaves the White House before the end of his term, it will be feet first in a bag with a zipper. Then we get President Harris or Pelosi, either of which will be worse than Hidin’ Biden. We are in the decline for our republic, whoever the President is the biblical lament applies that President X “did more evil in the eyes of the Lord than any of those before him.”