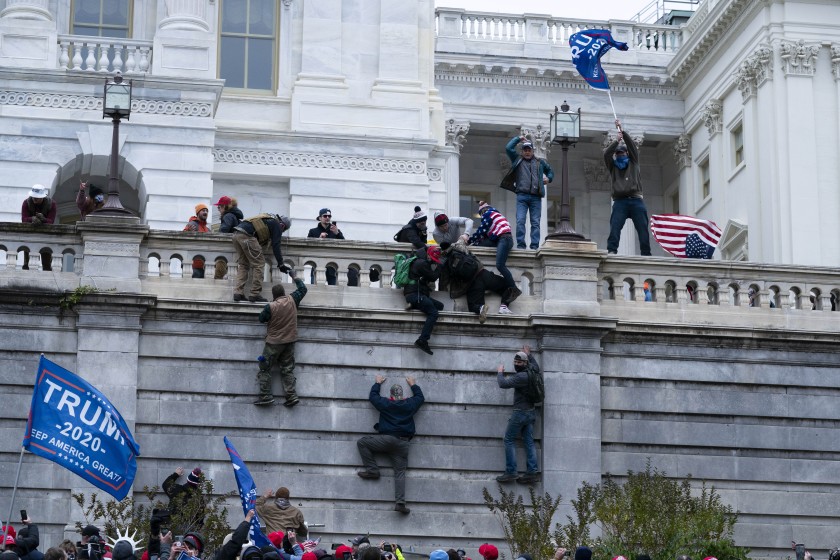 Arizona Democratic Rep. Ruben Gallego announced a proposal Friday to strip benefits for active or retired military members who participated in the Capitol Riot on January 6, according to Stars and Stripes.

Gallego wrote a letter to the Department of Veteran Affairs (VA) Secretary Denis McDonough and other top military officials March 18, stating, “Unfortunately, many veterans led or participated in this insurrection. Reporting suggests that nearly 20% of the insurrectionists were either veterans or military retirees, including some of the most violent members of the mob.”

Congressman Calls For Veterans, Servicemen Who Stormed Capitol To Be Stripped Of Benefits

“Any veteran or service member who stormed the Capitol on January 6 forfeited their moral entitlement to privileged benefits at the expense of the people of the United States,” the letter read.

“I ask you to quickly identify, investigate, and prosecute any active service member or retiree that participated in the attack under the jurisdiction of the Uniform Code of Military Justice,” Gallego said.

Folks, I have strong feelings on this idea. As readers should know, I am a veteran. Here is a little background before I address the Congressman’s idea.

Buried in the bowels of my enlistment contract is a clause that I was subject to recall to active duty until I reached the age of 55 even though I never had to serve a day in the Reserves—Active or Inactive. So yes, the government, in special circumstances, does have a limited claim on military personnel even after they are discharged.

Also, I did take an oath to protect and defend the country of the United States against all enemies foreign and domestic. Actually, I’ve taken that oath many times as both an elected official and a service member. Funny thing is, I was never released from that oath, either as a military member or an office holder.

So, when I read this article, it makes me mad for a number of reasons. First, the Democrat Party is the home of the domestic enemies of the United States. Look at what that Party stands for: they hate God, limited government, life, they welcome racists and racism, they are all about the color of people’s skins and not the content of their character, they oppose hard work and passing an inheritance to your grandchildren, they protect the guilty and punish the innocent, they oppose self-defense, demonize law enforcement, embrace tyranny, hate the Constitution, our Founders, and our history.

Given the oath that we veterans have taken, and the election fraud used to keep Democrats in power, I can fully understand that many veterans were in Washington D.C. on January 6th. Do I believe that what happened was an insurrection? NO. Remarkably, despite claims this was an armed event, no one in officer or law enforcement has yet to prove a single firearm was taken into the Capitol Building let alone used in an attempt to overthrow the government. It does appear that folks did not properly enter the building but for the most part, the worst they are guilt of is trespassing or something similar. Folks like buffalo boy and Jorge behaved stupidly by going into places that they shouldn’t like the House floor and Pelosi’s office. Had they stayed in public areas, much of the drama on that day would not have occurred.

Congressman Gallego is just pandering for some publicity. Invoking the UCMJ (Uniform Code of Military Justice) is laughable [for reasons that I will explain in a moment] and meant only to impress the uninformed masses. There is no legal precedent to do what he is suggesting. Oops, he is a Democrat so when has the law even been an impedance to what they do?

Many parts of the UCMJ are not followed by the military except as a tool for selective enforcement. Here’s a few examples. Ever seem a sailor with a tattoo? Per the letter of the UCMJ, a tattoo is forbidden, allegedly as the destruction of government property. Although this policy has softened over the years.

Adultery is forbidden. As is homosexuality, at least until Obama was in office. The UCMJ covers many moral areas which are routinely not enforced. My point being that the UCMJ is being softened by the civilian government and not the military. The trend is away from enforcing many provisions and making the military, …well less military.

Sorry Congressman but attempting to use the UCMJ is a nonstarter in my eyes. Secondly, I know of no possible way that the military can touch the life of a discharged veteran or retired person. Gallegos wants to waive a magic wand and take away veteran benefits? Sorry dude. Whatever happens in the civilian world, we earned the benefits. Even veterans in prison can get benefits from the Veteran’s Administration.

After a diligent Internet search, it looks like the Congressman has this in mind:

Can A Veteran Receive Retired Military Pay While In Prison?

Generally, yes. Being convicted of a crime almost never jeopardizes a federal pension – the rare exception to this rule are charges relating to criminal disloyalty to the United States: espionage, treason, sabotage, etc.

Sorry Congressman but what happened on January 6th falls way short of “espionage, treason, sabotage”. Jorge Riley and others have been charged with many things, but none come close to the threshold needed to go after veteran’s benefits.

The truth is that most veterans and other folks in Washington D.C. on January 6th were peaceful. If the veterans were wanting to overthrow the government do you really think they’d bring their wives and children to help?

If that doesn’t help then try this, the purpose of the military is to kill people and break things. Since the evil veterans on January 6th didn’t come properly prepared with vests, guns, and other military stuff, then how were they planning to overthrow the government? Harsh pronouns and colorful metaphors?

This is just another attempt to use the power of the Federal Government to attack Trump supporters that believe that the Democrats cheated yet again and get publicity at the same time. Such selective enforcement is tyranny and doing it retroactively is doubly so.