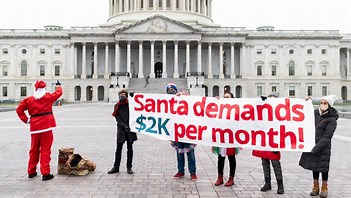 By frequent contributor The Chief

Well Congress went and acted, passed a large bill, without reading it, sending millions in aid to other countries, kept transit running, bailed out some businesses that don’t deserve to be bailed out, and sent you $600.  Yep, some scraps from the table courtesy of Congress.  You should see some of the aid money sent to other countries; countries in the Middle East are featured quite a bit, yep those same countries where we send our young people to die in pointless wars, then pay to “rebuild” and “remodel” their governments after ours….winning proposition huh?  Trivia question, name a country the US has left after a successful military operation there?  I’ll hold the line.

Yet almost every member of Congress–to a man–is nominating themselves for sainthood after approving a package to keep the government running and send out a cool $600 to certain people.  The criteria has yet to be fully released but I would think it’s the same lucky winners from the last go round, regardless or employment status, or if Covid has even had an effect on you.  This is because we have no reliable system, as witnessed by California’s EDD (unemployment benefit distributor) sending out fraudulent checks to inmates etc. and ignoring legitimate claims.  Trust me on this one, Sen Diane Feinstein, yeah the sitting Senator, “applied for and got a weekly check” yeah…… wild.  Not a soul at EDD could catch that one, or Scott Peterson (the one on death row) didn’t get caught either, but for those who actually are eligible, yup many are on their fifth month or more of waiting for the claim to be processed.  SAD!

Back to the $600. What makes me most upset is that’s a very small amount. For me, a single guy, that covers my utilities for about 2 months.  Think about folks 9 months behind on rent, utilities, mortgages, car payments, credit cards, student loans….so on so forth.  Doesn’t inspire much confidence does it?  In truth the $600 will please the 90 Day Guys, since the stocks hit a new record high as of this writing.  And for most, that buys Christmas gifts, especially when you add on the extra $600 per child.  However I see no one making an effort to pay off past due debt, because well, what’s the point?  The government has no answer, and we have always rewarded bad behavior.

In closing, look for the bleeding hearts to come out and demand larger checks, think $2-4,000.  (This has already started) Then look for cries that these checks should be monthly, until we hit a pre-Covid unemployment or economic growth numbers.  These numbers are not likely to be matched for years, so in essence we will have Universal Basic Income.  Ironically its Republicans such as Josh Hawley of Missouri pushing for this.  Stupidly the GOP will fall for this gamut, and we will be the co-authors of UBI.  Good luck taking these payments away once they start.  If you are on the receiving end of these checks….well it’s your money so do as you please, congrats.

BTW $600 when you have shut businesses down for 9 months and counting is pathetic, very Marie Antoinette-like I may add.