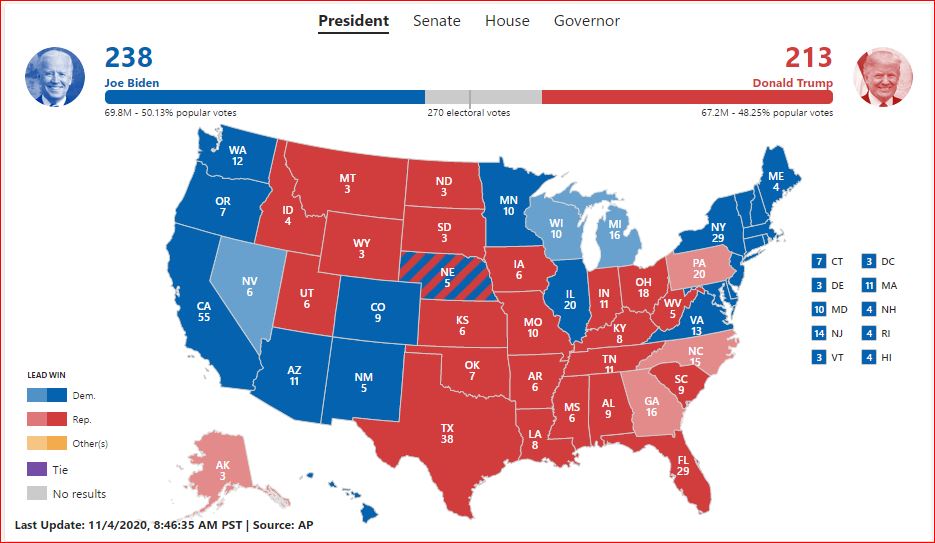 As I write this the morning after the election, several races are yet to be decided due to their closeness. Sadly, the results when I went to bed last night are different this morning. In my opinion, the contest will come down to two states Wisconsin and Michigan. If Biden wins both then its over but if Trump can win one, then he will likely win another four years. Either way, I think that Trump will be the last Republican President in this nation’s history.

Amongst the happiest people today are the establishment Republicans. They hate Trump even more than the Democrats. The biggest losers if Biden wins will be Conservatives and biblical Christians. Sadly, a Biden win is a conscience choice to reject freedom and turn the rest of the country into a San Francisco style socialist utopia like Cuba (there’s a reason Trump won Florida).

Folks, Conservatism of the Christian variety is about to become a costly belief. It may cost you your job, your property, your faith, and your family. If voicing support for Trump could cost you your job when attending a Trump rally and he was President, what will it cost you when Biden, and whoever is really pulling his strings, comes to power.

Over time, look for private schools to be forced to adopt LGBT, offer abortion services or referrals on campus, and a variety of other things against their beliefs or be cutoff from tax exempt and/or nonprofit status, removing credentialing of their degrees, and no government student loans. I predict that almost without exception, that all private and/or religious schools will capitulate their stated beliefs given the choice of God or Mammon.

The First and Second Amendments will be redefined to take away God in the public square and your right to defend yourself and your family. Oh, and if you don’t do and say the right things in public and private, you will be punished. In your home, if you teach your children your beliefs on the sanctity of marriage and other things contrary to the officially stated government positions on such topics, the government may remove your children from your home.

For those of you that think I’m exaggerating, look at Canada where all these things are happening and have been for many years.

Oh, lest you think Fox News will save you by exposing all this and shaping the opinion of the opposition, think again. Folks, Fox News is not what you think it is. It was founded by a guy interested in making money on Conservatism not because he was a Conservative. Heck, Rupert Murdoch was not even an American. He moved to the United States from Australia so he could expand his media empire. He became a citizen for business reasons. Roger Ailes, who put Fox News together for Murdoch, is long gone as is Murdoch. The next generation in the Murdoch family doesn’t care about advancing Conservatives, they just want to make money from them.

Lastly, Fox is no longer a Conservative network. Yep, they have Tucker and Hannity, but the rest of the network is shifting markedly to the Left. Fox is entering the bipartisan phase of their existence. However, in politics, “bipartisan” means agreeing with the Democrats. When that happens, who needs to hear from opposing views because they don’t matter. If you recall, CNN was founded by Ted Turner as the Conservative alternative to the big three (ABC, NBC, CBS) and look at CNN now. Fox will go that direction sooner or later.

Folks, buckle-up because you will be experiencing turbulence for many a year if Joe gets over the finish line.