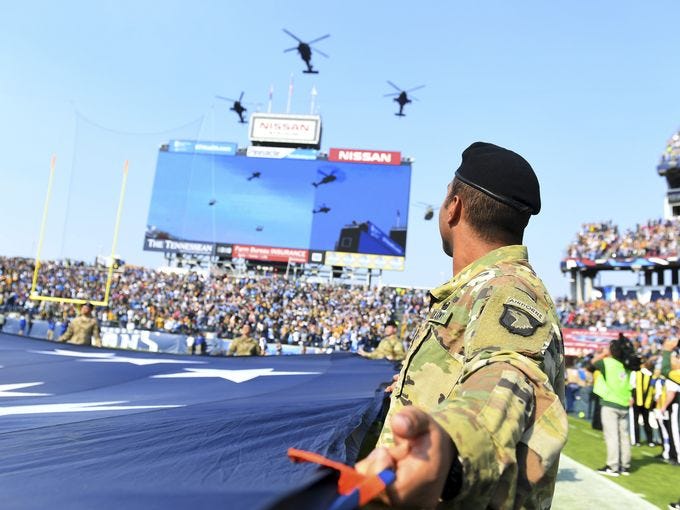 Gee whiz, nobody on the right or left seems to understand a good sarcastic comment when they hear it.

Here’s a transcript of the event from the article by World Net Daily.

The remarks came Sunday during the broadcast of the game between the Tampa Bay Buccaneers and the Green Bay Packers at Raymond James Stadium in Tampa, Florida.

After several U.S. military aircraft flew over the stadium, Aikman, a former Dallas Cowboys quarterback, said: “That’s a lot of jet fuel just to do a little flyover.”

Buck chimed in with, “That’s YOUR hard-earned money and your tax dollars at work.”

In the past 24 hours I’ve heard all sorts of people from Rush Limbaugh to sports talking heads try to chime in on this brief set of comments heard via a supposedly “open microphone.” Without exception, they all got it wrong. Limbaugh danced around the correct interpretation (almost deliberately so), but he missed it just as badly as Armstrong and Getty did this morning. The sports talk show I heard while at my doctor’s appointment today was off the mark also.

Folks, the understanding is really simple if you understand the context of the remarks.

First, these comments are made at an NFL game. You know, the place where players kneel for the national anthem—a huge sign of disdain and disrespect for our country. NFL games are often not even broadcasting the national anthem and/or players hide in the locker room until it is over before taking the field. The NFL has made it plain to all that it hates America and sports is now political because a vocal few in their midst hate President Trump.

Second, everyone keeps getting thrown off the trail by the money comment. They want to take it literally and when they do, they are off on a rabbit trail to nowhere. Folks the money comment is the context clue that this comment and what is about to transpire is sarcasm. Everybody seems to miss this point.

Aikman “That’s a lot of jet fuel just to do a little flyover.”
Buck “That’s YOUR hard-earned money and your tax dollars at work.”
Aikman delivers the zinger… “That stuff ain’t happening with the Kamala-Biden ticket, I’ll tell you that right now, partner.”

The point of the exchange is that as much as the Democrats hate America, we won’t see such displays of patriotism under a Harris-Biden Administration. Oh, Harris before Biden is another context clue that this is sarcasm. It’s really a backhanded slam of the Democrats and the NFL because of their lack of patriotism.

Oh, and this wasn’t an open mike mistake, it was only regarded as that because neither guy was talking directly into the microphone.

I’m glad someone in the sports world is taking a shot at professional sports and the political party which has decided that repudiating America and what it stands for is a winning strategy.

Folks, once you realize the comment is sarcasm then you can enjoy it for the spontaneity and humor that it was intended to convey.