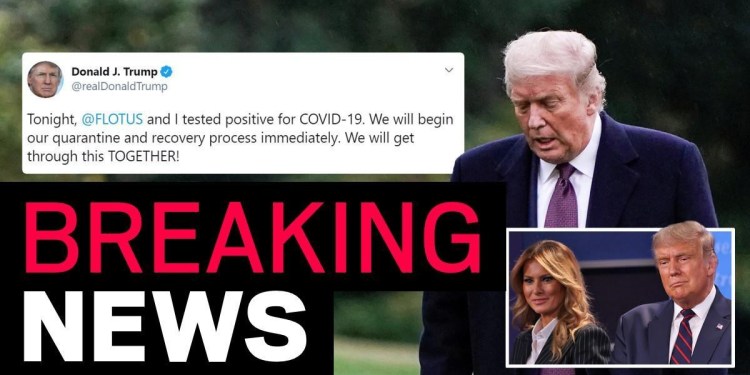 Thursday night, I went to the local “speak easy” to meet with a few guys from the church. On the way, I saw the news alert that Hope Hicks was positive for Covid. My first reaction was to reach out to Troll and see if he was OK. As close as he feels to Hope, I thought maybe he should get checked too. Lest you forgot, his motto is “Keep Hope alive.” After being assured that Troll was in no immediate danger, he’s never been within six feet of Ms. Hicks but its on his bucket list of things to accomplish, I then began to wonder if this was an outlier.

When I got home and was getting ready for bed, the wife said, “Trump has Covid. Its all over Facebook.” Color me skeptical but I rarely find Facebook a place for reliable, breaking news. About five minutes later, Fox sent out a news alert that the Orange Man and his wife did indeed test positive.

So, at this point in the news cycle, we have a supermodel that works for Trump, Trump, and his wife testing positive for Covid. I reflected back on previous presidents and wondered if anything like this had happened before. I decided, no. In my lifetime, I can think of only two other Presidents that might find themselves in a news story about a disease that he shared with two women, one of whom was his wife. One was JFK and the other was Bill Clinton. If Bill Clinton and an intern were positive, would you really expect Hillary to have the same illness? I decided, nope. Not much chance of that happening.

As I further considered the news about President Trump, I went outside to verify that our cars were locked. Its just a habit I have to make sure my family is safe. After having your car broken into a few times, you take a few extra precautions. While outside, I looked up and saw a full and very orange moon in the sky as I headed to bed. In the morning the orange moon was still there, just in a different part of the sky. Later in the morning, a very orange sun tried to shine down on the world. I had a mental picture of the Orange Man looking down on the devastation wrought by Democrats on this once golden state. I pictured an orange Trump trying to shine down on the darkness that has engulfed the people of this state and offer them hope.

The next morning, I was hearing a variety of reactions from Democrats. They were saying everything from wishing that Trump would die quickly and burn in hell, to Trump is faking it for sympathy, to Nancy Pelosi and Joe Biden saying they wished him the best and hoped Trump would recover.

Democratic nominee Joe Biden delivered a message of unity after reports that President Trump would be taken to Walter Reed Medical Center following his Covid-19 diagnosis.

“This cannot be a partisan moment,” Biden wrote on Twitter Friday evening. “It must be an American moment. We have to come together as a nation.”

Earlier Friday, Biden tweeted that he and his wife Jill are sending their thoughts to Trump and first lady Melania Trump and wishing “for a swift recovery” after the Trumps announced they’d tested positive for COVID-19.

Biden weighs in after Trump heads to the hospital: ‘This cannot be a partisan moment’

Some of these well wishes seemed disingenuous to me but politics is sometimes a weird blood sport. It occurred to many that this is the closest Pelosi has ever been to sitting behind the desk in the Oval Office. At one point during the day, I pictured her sending a clandestine group to the White House claiming to be a decontamination a crew whose real purpose was to measure the curtains in the White House just in case she gets to redecorate it.

Last night was another very full and orange moon.

Today is even more strange. The orange sun is still blazing in the sky. News stories abound that Joe Biden is pulling campaign ads critical of the President.

Meanwhile, former Vice President Joe Biden, who tested negative to coronavirus after participating in the first presidential debate, has asked that his campaign pull their negative ads while the president is recovering from COVID-19.

If you read further, Biden is hoping that Trump will do likewise. Guess Joe doesn’t know the Orange Man very well.

The Trump campaign, though, has not paused advertising.

Many Democrats are acting like they don’t want to kick Trump while he’s down. Are they treating Trump as a terminally ill President? Do they actually believe Covid is a death sentence? Also, a few Republican Senators have said they are positive for Covid too. Is this a “rope-a-dope” strategy to cancel not only the next debate but to stall the confirmation hearings to fill the Supreme Court vacancy? Are Democrats believing the polls showing Joe is ahead? Folks, some type of game is afoot as Sherlock Holmes used to say. Are they being magnanimous in victory or defeat? You don’t usually think of seduction as a tool in their arsenal but trust me, it’s a weapon they are very good at wielding. Buckle up, I have a feeling this year is about to get even stranger.