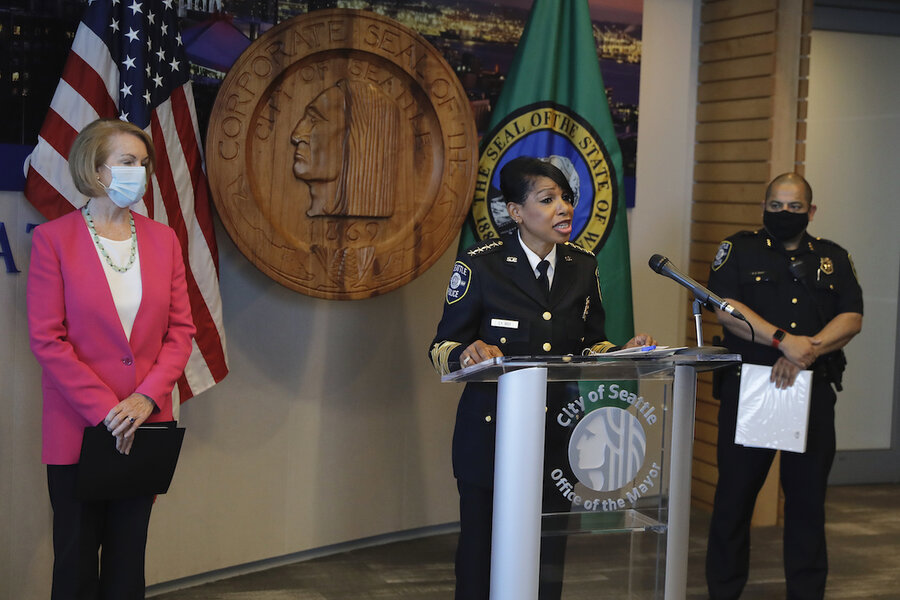 In case you have missed the rioting, looting, and outright lawlessness in big cities throughout the country, Seattle voted Monday to slash the police department budget by 3 million. While that seems like a small number, the result will be a reduction of 100 police on the streets. Top staffers are taking forced pay cuts, and that is just the beginning of yet another “pass it to find out what’s in it, bill.” Seattle considered the bill, a favorite of BLM folks because they all think if they appease the mob, the mob will either stop, or target them last.

When the agenda item came up, both Mayor Durkan and Police Chief Carmen Best opposed this action saying it will affect minority (AKA non-white) officers the most and will encourage yet more lawlessness and crime. The motion carried 7-1, with one abstention. The “no” vote was Kshada Sawant a socialist who stated her no vote was because this measure did not go far enough. Keep in mind that Seattle had a foreign country (Chop/Chaz) inside of it for 6 weeks or so. A country that erected its own borders, tracked the I.D.s of all who entered or left, and had a group of rogue security guards armed with guns far more illegal than the ones you or I are permitted to own to enforce its laws!

Chief Best announced the following day she was retiring. She had been with the department for 28 years. She was a lifer in a field where so many spend their career hunting for the next higher paying job to spike their retirement. Just as a comparison, William’s and my hometown is on its 4th chief in 16 years! Best, who is black by the way, actually did a great job over the years and as a lifer knew the department well. She made it more diverse while enforcing the law fairly. Isn’t diversity a calling card of the BLM/far left/Soros types? Best saw her life’s work wiped out with the stroke of a pen via a unanimous vote! It was unanimous because the dissent was only because it didn’t go far enough.

Here are some highlights from the presser:

But more than anything during her press conference, she was frank as she explained she couldn’t bring herself to carry out the layoffs. She read a letter written to her by a new black officer.

“He is one of the people that will probably not keep a job here. And that for me, I’m done. Can’t do it,” Best explained.

Best is the first black woman to lead the SPD. She rose through the ranks from a patrol officer in the East Precinct to sergeant, lieutenant, captain, and deputy chief. Mayor Jenny Durkan appointed her to Chief two years ago after a controversial snub that led to a large public outcry.

But on Tuesday, the past was behind them as Durkan reiterated her unwavering support for Best and even appeared emotional.

“My heart is obviously heavy to lose her and I will freely admit, I wish she were staying,” said Durkan.

Best said she wrestled with the decision and made it before the Council’s Monday vote.

Durkan said she believes Best is the right person to “reimagine” policing in the city.

Best voiced her resistance to the City Council’s plan to slash the department’s budget by 50%, and the decision for officers to leave the East Precinct in June, when the “Capitol Hill Occupied Protest” or CHOP, took over several blocks surrounding the building for weeks. Protesters even targeted Best’s home.

Durkan and Best both took shots at the City Council who they say sought to defund the SPD without a real plan.

“This is not about the money. And it’s not about the demonstrators. Be real. I have a lot thicker skin than that. It really is about the overarching lack of respect for the officers – the men and women who work so hard, day in and day out,” Best said.

“This was a difficult decision for me, but when it’s time, it’s time,” Best wrote in an email to her 1,400 officers Monday night, hours after.

Notice, Mayor Durkan mentioned in the quote above? This lady is very conflicted. First, she knew, supported, knelt with, etc. supporters of BLM/CHOP/CHAZ—at least until they decided to protest at her house. Next time we hear about her is when she is supporting her chief and taking shots at her fellow council members for cutting the police department. Durkan is the worst type of politician. Such political types support a fringe movement when it has no cost, but then when it comes time to put pen to paper, they decide to take a different tact. Also notice crime is way up, the violent, lawless type especially, and the answer from city leaders is to reduce the number of police…. doesn’t seem too smart.

Best served as the chief law enforcement officer in the city of Seattle but she was overruled by the Mayor during the protests. Following the mayor’s orders, the police were forbidden to enforce the law or keep order during the upheaval. Furthermore, agreeing with the protestors, the entire council voted to cut her department’s budget without any concern for public safety. Best knew the department is in trouble for the foreseeable future and did what any self-respecting human being would do, step down.

It may soon dawn on Mayor Durkan that not only has she lost control of her city council; she has also lost control of her city. Durkan has been on every possible side of this issue telling her audience whatever she thinks will be to her advantage. Clearly, she has lost whatever credibility and goodwill she may have had. Meanwhile, a recall petition was just green lit by the City Court. Now Durkan must survive a recall while grappling with finding a new chief of police willing to work in her city and deal with fellow councilmembers who will want to gut the police budget further.

This same scenario will be playing out all over the country in the next few months….

Editor’s Note: This article proves Joe Biden’s V.P. pick was not the Best.