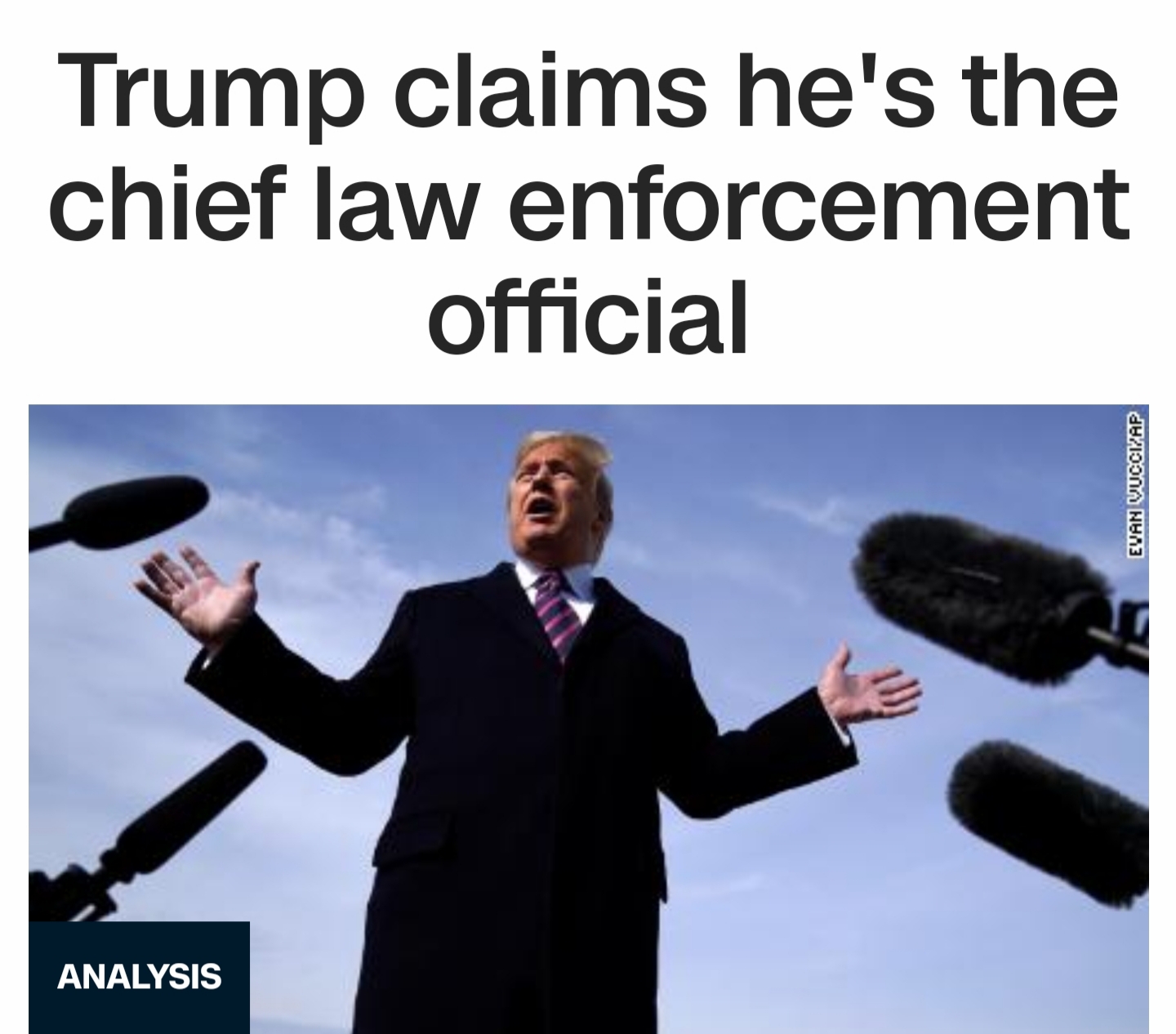 I was minding my own business today when my token Liberal friend texted me a meme on President Trump with the statement, “Trump claims he’s the chief law enforcement official.”

The text accompanying the meme was accusatory in tone. Let me give you the conversation.

Me: The Executive Branch of government is charged with enforcing the law, the Legislative Branch makes the law, and Judicial Branch resolves and tries the Law. What’s the big deal? Gavin Newsom is technically the chief law enforcement guy in California. All federal people, like Attorney General and Federal Prosecutors, are under Trump, since he is President.

Almost all Federal government employees, as a percentage, work for the Executive Branch.

Lib: So would Warren be the US chief law enforcement officer like trump is?

Me: Sure, whoever wins in November will be chief law enforcement official for next four years. That’s basic Constitution not rocket science.

This power is where Trump or Newsom gets power to pardon or commute prison sentences.

Lib: I’m not sure what page of the constitution where it states the president is the chief law enforcement officer of the US.

Me: Since all law enforcement people work under him, and he appoints the department heads and has power to remove them, this makes him chief of law enforcement. Same idea as him being Commander of the military. He is charged with enforcing the law and protecting citizens.

This power of the President is supported by the Supreme Court and has been upheld in numerous court cases.

Trump appointed Mueller and had the power to fire him without cause at any time.

If Chief Executive is not chief law enforcement guy then who is?

Lib: The Attorney General has always had that role until now.

Me: He may have day to day role but who hires and fires Attorney General? The President.

Lib: Ya, I know that saying but it doesn’t pertain to trump since he never once has taken responsibility for his actions instead he attacks others and lies.

Me: Your emotional response does not negate a factually true statement.

And, poof! Just like that the conversation was ended.

Can you imagine a California Liberal appealing to enumerated powers of the Constitution to limit the government?

Sadly, hell has not frozen over. A Liberal has not seen the light and become a Constitutionalist.

Trust me, this guy is OK with Obamacare, open borders, and all the extra-Constitutional actions of the federal government—which he has never once complained about–but when dealing with Trump, he then tries to limit the President to only enumerated powers??? Folks, I just don’t get it.

Another funny one? On a previous occasion, this guy complained that under Trump, the federal budgets are too large. So his brilliant solution, he wants a Democrat in the White House. To which I responded, if Hillary or anyone else in the Dem field won in 2016 or this time around, the federal budget would be even bigger. Grrrrr!!!

Folks, I don’t mind disagreeing with people or that others have a difference of opinion but what really frosts me is when they have one standard for the people that they like and another for everyone else.

Sadly my friend has no interest in learning for himself what Trump is doing. He can only parrot stuff he’s heard from some place on the Internet.

Bottom line is you can’t use reason to talk with a person that can only engage issues on an emotional level. Yes I know the proverb about fools and their folly but on the other hand, why should I expect the spiritually dead to exhibit signs of life? My friend needs Christ not an amended voter registration card. Thanks to Trump, I have more freedom to practice my religion and engage with lost souls.