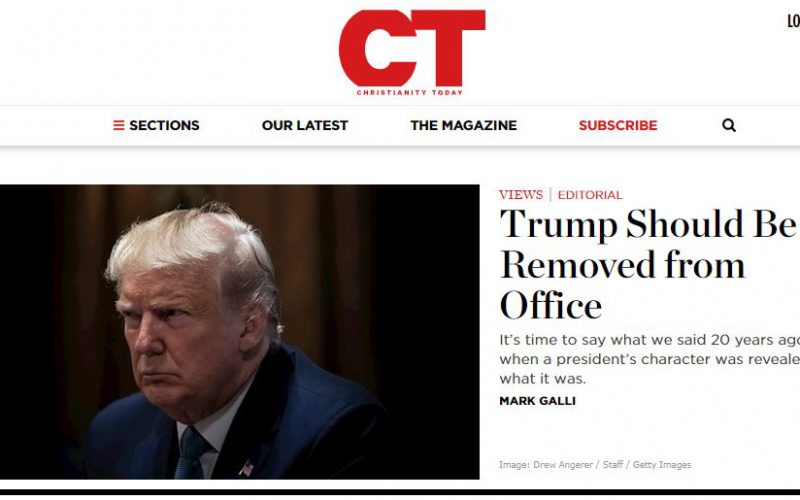 Orson Scott Card wrote a book many years ago called Speaker for the Dead and yesterday Christianity Today decided to do just that claiming that Billy Graham himself would have opposed the Orange Man and support his removal via impeachment. Today I wish to unpack this controversy and the Graham family’s response.

First here is a look at the Christianity Today editorial Trump Should Be Removed from Office.

In our founding documents, Billy Graham explains that Christianity Today will help evangelical Christians interpret the news in a manner that reflects their faith. The impeachment of Donald Trump is a significant event in the story of our republic. It requires comment.

The typical CT approach is to stay above the fray and allow Christians with different political convictions to make their arguments in the public square, to encourage all to pursue justice according to their convictions and treat their political opposition as charitably as possible.

That said, we do feel it necessary from time to time to make our own opinions on political matters clear—always, as Graham encouraged us, doing so with both conviction and love.

Let’s grant this to the president: The Democrats have had it out for him from day one, and therefore nearly everything they do is under a cloud of partisan suspicion. This has led many to suspect not only motives but facts in these recent impeachment hearings. And, no, Mr. Trump did not have a serious opportunity to offer his side of the story in the House hearings on impeachment.

But the facts in this instance are unambiguous: The president of the United States attempted to use his political power to coerce a foreign leader to harass and discredit one of the president’s political opponents. That is not only a violation of the Constitution; more importantly, it is profoundly immoral.

So literally without any evidence presented, we at CT know that Trump is guilty as sin. Why? Because we don’t like his Twitter posts.

The reason many are not shocked about this is that this president has dumbed down the idea of morality in his administration. He has hired and fired a number of people who are now convicted criminals. He himself has admitted to immoral actions in business and his relationship with women, about which he remains proud. His Twitter feed alone—with its habitual string of mischaracterizations, lies, and slanders—is a near perfect example of a human being who is morally lost and confused.

That Trump fired guys that were later convicted as criminals—many in a failed effort to take him out—and yet despite Mueller’s Report, he is still there. Oh, and he admitted that he likes women and has done business in New York (immoral actions in business?).

Trump broke the Ten Commandments so for God’s sake he must be removed.

To the many evangelicals who continue to support Mr. Trump in spite of his blackened moral record, we might say this: Remember who you are and whom you serve. Consider how your justification of Mr. Trump influences your witness to your Lord and Savior. Consider what an unbelieving world will say if you continue to brush off Mr. Trump’s immoral words and behavior in the cause of political expediency. If we don’t reverse course now, will anyone take anything we say about justice and righteousness with any seriousness for decades to come? Can we say with a straight face that abortion is a great evil that cannot be tolerated and, with the same straight face, say that the bent and broken character of our nation’s leader doesn’t really matter in the end?

How can you be a Christian and support Trump? If abortion is an important issue for you then remove Trump and give us a pro-abortion Democrat so sanity can return to American politics.

So we have done our best to give evangelical Trump supporters their due, to try to understand their point of view, to see the prudential nature of so many political decisions they have made regarding Mr. Trump.

We have done our best to put up with you Trump supporters but it’s time for you to throw him under the bus otherwise he will be reelected and God help us if he is.

On social media, Franklin Graham wrote, “Christianity Today released an editorial stating that President Trump should be removed from office – and they invoked my father’s name (I suppose to try to bring legitimacy to their statements), so I feel it is important for me to respond.

“Yes, my father Billy Graham founded Christianity Today; but no, he would not agree with their opinion piece. In fact, he would be very disappointed. I have not previously shared who my father voted for in the past election, but because of this article, I feel it is necessary to share it now. My father knew Donald Trump, he believed in Donald Trump, and he voted for Donald Trump. He believed that Donald J. Trump was the man for this hour in history for our nation,” he said.

Christianity Today ignores the Bible when trying to tell us what to believe about impeachment. In fact, what they said in this editorial is so unbiblical as to be nothing but sins of omission. What does the Bible say about rules of evidence?

1 Democrats have never produced one witness with firsthand knowledge of anything let alone two or three.

One witness is not enough to convict anyone accused of any crime or offense they may have committed. A matter must be established by the testimony of two or three witnesses.
Deuteronomy 19:15

“Every matter must be established by the testimony of two or three witnesses.”
2 Corinthians 13:1-2

In your own Law it is written that the testimony of two witnesses is true.
John 8:17

2 Do not decide a matter without first hearing both sides

“He that is first in his own cause seemeth just; but his neighbour cometh and searcheth him.” Proverbs 18:17

He that answereth a matter before he heareth it, it is folly and shame unto him.
Proverbs 18:13

Trump a notorious sinner and so are you

Is President Trump guilty of sin? Of course he is, as were all past presidents and as each one of us are, including myself. Therefore, let’s pray for the president as he continues to lead the affairs of our nation. – Franklin Graham

For all have sinned, and come short of the glory of God;
Romans 3:23

Christianity Today attacks Trump’s character with ad hominem claims “He himself has admitted to immoral actions in business and his relationship with women.” The claim is used as a factual statement without any proof or foundation and is used to buttress their assertion of his guilt in the impeachment accusations.

President Trump has been married more than once, as was Ronald Reagan whom I regard as the greatest President of the 20th Century. Trump surrounds himself with beautiful women but does not have a reputation of having intercourse with them in the Oval Office as has been the practice of other Presidents. Divorce is a sin in most circumstances but this has not been an issue in Evangelical circles for many decades. Was this a shot at Stormy Daniels?

Most of those who formerly worked for Trump and are headed for jail were convicted of offenses prior to being on Trump’s payroll. We have previously documented on this blog that Trump’s pool of campaign staff was not top tier, especially early in the campaign. Trump got last pick of those that remained after Bush, Rubio, Cuz, etc. had hired their staffs. Any people not in this category were never found guilty but entrapped. They had the choice of fighting prosecutors with unlimited budgets or saving their personal assets and taking a plea deal. This was not a criminal issue but an economic one. In light of recent revelations by the government, some are trying to undo their plea bargains and be cleared.

Hitting Trump with the argument that we don’t like what you say on Twitter is not relevant to the impeachment issue either. On Twitter, Trump is typically defending himself in real time or touting his accomplishments; neither of which the media is willing to report. In a world with 24/7 news coverage in which almost 100 percent of everything about Trump is presented negatively, what do you expect him to do? Trump, like Saint Nicholas, hits heretics right between the eyes.

My question is why? I can rebut their assertion in several ways. Here’s three quick ones.

“You can’t beat something with nothing.”

“You go to war with the army you have not the one you want.”

Oh, and Trump is president because it is God’s will.

CT asks something that deserves comment. “Consider how your justification of Mr. Trump influences your witness to your Lord and Savior.”

My response is this, if we continued down the road Obama put us on, it would be illegal for us to have any public witness for our Lord and Savior. All religious institutions were being subjugated to the State by the State’s use of the sword and mandated to accept homosexuality and other perversions, compromise on abortion, and the core claims of Christianity such as Jesus being the only way to God. We as Christians were staring into the abyss. We were in danger of having our children removed from us by the State, our institutions outlawed, and other retributions visited on us for being practicing Christians. (This is always the experience of Christians in socialist societies.) Trump stopped this momentum and is reversing this danger to the very fabric of our existence. Trump is our Constantine. Whether he is one of us or not, he has never said but his policies are exactly what Christianity needs to be legal and free in this country. The fact that Christianity Today is willing to throw us under the bus to score cheap political points is all you need to know. They are not on the side of light.

The final tell in their editorial is, “we have done our best to give evangelical Trump supporters their due…” No. They are tired of us sticking to this man in spite of all hell being loosed on him and him being unscathed. Folks all this impeachment stuff has done is insure the Donald Trump will spend the rest of his days fighting for this country and for us. The days of ex-Presidents sitting silently on the national sidelines are over. Trump will remake the Republican Party just as I’ve been saying for many years. To NeverTrumpers and Democrats, look out, the Orange Man cometh in wrath and vengeance.