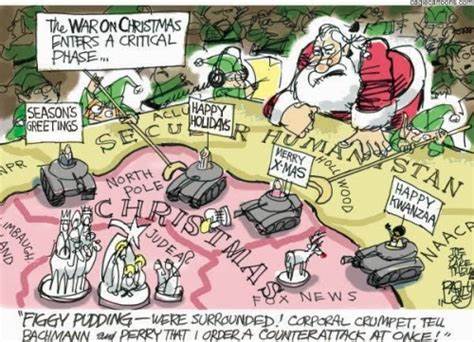 I was looking at a few of the tech websites that I regularly visited when I came across this article by an author that I think is Hindu and even he finally gets it.

The perceived wisdom is that the “War on Christmas” is merely a right-wing delusion and in general companies themselves are deciding to be more inclusive in celebrating the holidays rather than responding to complaints from anti-religious people who are offended by Christmas decorations.

It turns out Microsoft has proven that this was not the case, after responding to a complaint about adding a small Santa hat to VSCode, Microsoft’s open-source IDE.

Due to one complaint by an anonymous guy on the internet, the offending Santa hat was banished.

The Santa Hat on vscode insiders and pushing of religion is very offensive to me, additionally xmas has cost millions of Jews their lives over the centuries, yet even if that was not the case, pushing religious symbols as part of a product update is completely unacceptable. Please remove it immediately and make it your top priority. To me this is almost equally offensive as a swastika.

Christian-Schiffer referred to an article on Sefaria listing the sins associated with Christmas which include:

Microsoft responded to the complaint by saying:

The author of the article concludes:

In short, the war on Christmas appears to be very real.

Folks, I’m glad whenever other people agree with us—especially, that there really is a war on Christmas. The logical fallacies in the article cited as the reasons to oppose Christmas are frankly ill-informed, inaccurate, and just dumb.

First, the swastika is a Hindu religious symbol and is not the exclusive property or emblem of the Nazi Party as constituted in Germany. Hindus and others have used the swastika symbol for thousands of years before Hitler was born.

Second, a Santa hat is a winter symbol not a Christian one and people really wear similar hats in certain cultures. Oh, and there is zero proof that the real Saint Nicholas ever wore said hat.

Third, any holiday—Christian or not—can be celebrated by tradition and the real meaning can be forgotten. For example, in the United Stated we celebrate our Independence Day on July Fourth, but do you really believe that our people shun tyranny as a result? No. We have forgotten the reason and lessons of the Revolution. Our current government is much more tyrannical and oppressive than the British rule of the 1770’s. Our tax rates are way higher than those of the Stamp Act and tea taxes imposed by King George back in the day.

Jesus came to rescue mankind from the curse of sin not the Torah. Jesus fulfilled the requirements of the Torah and perfectly kept the Law. He ever said, “Do not think that I came to destroy the Law or the Prophets. I did not come to destroy but to fulfill.” Matthew 5:17.

Christmas is a 24 hour declaration of nothing anti-Jewish. Where does that come from? Christmas is a 12 day celebration in the Church’s liturgical calendar beginning on December 25th and going thru January 6th. Twelve days of Christmas anyone? Messiah has come, first to the Jews—angels declare peace on earth and goodwill to all men on December 25th and January 6th—known as Epiphany—celebrates salvation coming to the Gentiles, as symbolized by the arrival of the wise men. Jesus was probably not really born in December although the 25th day of a month is mentioned in some early Christian literature. Since we don’t use the same calendar as they did back then, this discussion can’t go much beyond what I have just stated.

Evil doesn’t take a holiday and not all Christians celebrate Christmas on December 25th so what does the fact that someone of a certain faith might be killed on a particular date? I’m sure I could find examples of people from almost any faith group that were killed on December 25; especially, over a span of over 2,000 plus years. I don’t deny that Christians have persecuted Jews at certain points in history but it’s not a teaching of the New Testament or tenant of our faith. In fact, persecution of Jews is the opposite of Christianity properly understood. There’s that pesky command to love our neighbor thing that gets in the way of such behavior.

The claim that popular Christmas customs are all the result of offensive and violent rituals is silly. We give gifts to others as a symbol of peace on earth and goodwill towards men—we keep circling back to this phrase—because God gave us His greatest gift in the form of sending His son to become a man and fulfill the requirements of the Law (Torah) and be the once and for all time sacrifice for the sins of the world.

Santa Claus is a composite of many traditions but Saint Nicholas was a real man that was best known for two things, giving gifts to the poor in the name of Christ and hitting a heretic (Arius) at the Council of Nicaea in about 325 AD. This was the first recorded time that any Christian decked someone in the halls.

Folks, the fact that one anonymous complaint can force a trillion dollar company to change something as trivial and innocuous as a Santa hat should really bother you and I hope it does. Especially when the same company is perfectly willing to repeatedly attack my Christian beliefs on issues of marriage and family and doesn’t care what I think.

3 thoughts on “Microsoft sadly proves war on Christmas is real”