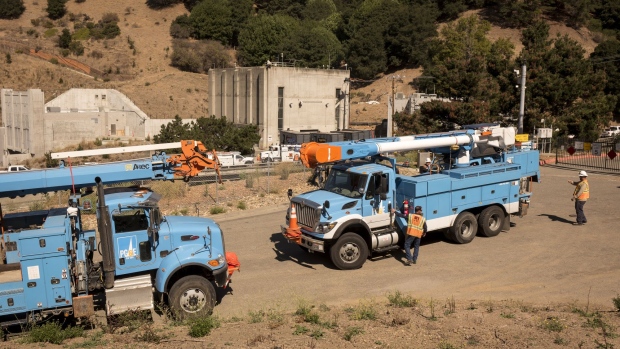 Now that the evil winds have died down–for now–and electrical service is slowly being restored, we here in the socialist mecca of Venezuela, oops I mean California, have contained the Zombie outbreak…this time. Consider this a practice run for “the big one.” We, living here in the SMUD service area, did experience 48–mostly arson fires–on the first day of the PG&E blackout but I’m sure it’s just coincidence.

In light of the recent fright that Northern Californians experienced from the PG&E power outages, we here at Really Right noticed that PG&E was experiencing a public relations nightmare over this service interruption. Their local offices were egged, their vehicles were shot, and other acts of vandalism occurred as well. As a result, we felt that PG&E needs to undertake a “feel good” campaign to win back the hearts of customers. In a spirit of sympathy for both PG&E and their customers, we decided to screen potential candidates as the new spokesman for the embattled company.

Our first thought was Chuck Norris. Chuck is well known as a man’s man. He doesn’t seem to be gainfully employed any more, at least not in front of the camera so we thought a financially struggling company could afford him. However, we decided that Chuck is not right for a California based company; especially, one headquartered in San Francisco. Chuck is a manly conservative and isn’t compatible with a company that poured ratepayer money into opposing Proposition 8. Why an electric utility has any business in taking sides on whether marriage should be between one man and one woman is just proof that their management sucks. Also, having Chuck Norris associated with this utility has a bigger problem. You see, nobody turns the lights out on Chuck Norris, Chuck Norris puts their lights out.

Michael Myers was another thought. What is October without Mike? The State is experiencing a lot of tension due to the fright given to them by PG&E and we are busily prepping for Halloween anyway. Baby Boomers, especially those in office, can really relate to Michael. When they were first dating in junior high, going to one of his movies was a surefire way to get a girl to curl-up in their arms. Oh, what fond memories. Mike has California roots being a well-known commodity in Hollywood. Mike is also known to avoid firearms and favors knives for his “wet work“. Given that our current Governor thinks that law abiding people shouldn’t be allowed firearms, this policy might seem to favor a guy like Michael Myers. However, Mike is known as the strong, silent type and like Chuck Norris, prefers to let his hands do the talking. He is really light on dialogue in his movies and that is a problem when you need a guy for doing voiceovers for commercials.

Our third candidate, Freddy Kruger, is strong in areas where Mike Myers is weak. Freddy has a distinctive voice that you never really forget. Freddy also is best known as a guy that reminds you to keep your lights on at night. In fact, Freddy has a following that never wants the lights to go off again. Freddy, unlike Myers, never wears a mask. As a disabled individual, Freddy has really used his disability to make a name for himself. The fact that Freddy is a grossly disfigured burn victim that is thriving amongst ordinary people is inspiring. You never know where he will pop-up next. This fact causes people to pay attention whenever he is on your television. Freddy could be a role model for what PG&E could become. Both have survived a horrible fire and PG&E is learning to overcome adversity and begin life anew. Freddy has been there and done that.

Some may wonder why I made the connection between Michael, Freddy, and PG&E. And for that, we circle back once again to San Francisco. The progressive leadership in San Francisco wants to dismember parts of PG&E. In some Frankenstein-like way, they want to create their own utility, but unlike a real utility, this one only owns transmission lines and no power generating facilities. I guess that would make it a very “green” utility with no carbon footprint other than that of an occasional fire. PG&E also provides natural gas service to “The City” but no word on who gets that slice of the company.

For those of us living in the real world, this idea makes absolutely no sense; especially, in that city. As the Sith Lord’s father liked to point out, nobody knows what is really under that city. Parts of their infrastructure date back to the Gold Rush era and there are no maps of what lies below the streets of San Francisco. Then there are the parts that survived the 1906 quake which again are not recorded but likely used in some spots. Thus San Francisco has many ancient components of their infrastructure that are in use way beyond their designed life. Taking on this liability is insane on the face of it. The city fathers may very well get their wish and live to regret it as “fire sale” can be defined in more than one sense.

Anyway, both PG&E and Freddy Kruger are associated with fright, fires, and dismemberment. It’s a match made in times of adversity, but it just might work. This association will inspire ratepayers to keep the lights on at any price as the alternative is too frightening. We here at Really Right think they ought to take a stab at it.