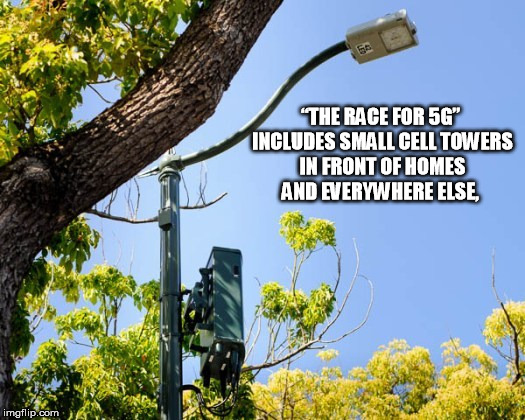 Members of the Elk Grove Tea Party ran a vigorous campaign to oppose progress by buying ads on Facebook and sending those newfangled email messages to the city’s leaders voicing their opposition. In addition, they spoke at several Council meetings during the public comment section of the meeting and then promptly went home to bed. Some even set their VCR’s to record the meeting on the community access channel to play at their next monthly meeting. Just because they lost the critical vote with the Council, they can’t let the issue go. Not when lives are at stake.

During this hearing, various speakers shared their concerns regarding potential negative health issues related to the installation of new wireless technology.

One of those speakers, Pamela Marquez, told the council that research regarding health impacts from small cell antennas is being ignored.

“The telecoms, the FCC and the city of Elk Grove continue to ignore research that clearly demonstrates we will be harmed by this 4G/5G technology,” she said. “The only real question is ‘Why?’ Is it ignorance, is it malevolence or is it just about the money? Whatever the reason, they clearly do not care about the health or the public.”

Other municipalities are also questioning 5G.

These cell antennas are sometimes 48” high by 14.6” in diameter. A better name for them is Close Proximity Microwave Radiation Antenna – Wireless Telecommunication Facilities (CPMRA-WTFs).

Keep cell antennas away from our Elk Grove homes!

“My personal reason for doing this is I believe that humanity is threatened,” says Sandi Maurer,a member of the activist group EMF Safety Network, which lobbies to reduce people’s exposure
to electromagnetic fields.

Cities Are Saying ‘No’ to 5G, Citing Health, Aesthetics —and FCC Bullying

With the approval of 5G by the Federal Communications Commission and lacking any court precedent, the Tea Party is having difficulty making their case.

The health argument is hard to take to court because the FCC has sole discretion over whether the emissions of an electronic device are safe, a right unquestioned by any current court cases or pending federal legislation.

After consulting with their medical experts and despite knowing the hazards of 5G wireless, members of the Elk Grove Tea Party have devised an ingenious way to illustrate the danger to an ignorant general public. After extensive research they have released a set of instructions to build a 5G transmitter with common household items. Tea Party members are seeking volunteers to deploy 5G devices in their own homes.

We here at Really Right have received an advance copy of the plans which we would like to share with you. These plans are still being beta tested and may have further refinement before mass publication.

The following was secretly recorded at their last Executive Board meeting and released to one of our chief correspondents.

5G transmitters are described as being about the size of a pizza box. While warming some leftover pizza, that’s when the idea came to me.

After consulting with Steve, he used to be in the Air Force during the Vietnam War and knows all about radar, we decided to use a radar range (microwave oven to you youngsters) to mimic the long-term exposure to a 5G transmitter. 5G transmits at 40 watts while a typical microwave is about 1,000 watts. Using simple math, 1,000 divided by 40 is 25; thus, one hour of exposure to a microwave is equal to more than a day being near a 5G tower.

The radar range at our assisted living complex will only allow us to program up to 999 hours of cooking time. This works out to 24,975 hours of exposure to a 5G tower. Roughly, three years in no time at all. Heck, in a few months we can prove that 5G is bad and long before those greedy corporations even put up any towers in town.

So far, these are the instructions.

Place microwave in an area that you spend lots of time in like near your favorite chair by the TV. Place it on a low table so you won’t hurt your back while moving it into position. This also allows it to be lower than your hearing aids.

Remove the front door. This might void your warrant but remember that you are sacrificing for the children.

It is important that the machine thinks the door is shut. You can break off the latch part of the door and shove it in the hole or place a non-conductive material in the hole to override the safety mechanism of the machine. If the light stays on, then you need to adjust the safety mechanism until the light goes out. Remember, microwaves don’t play well with metallic items. We tried screwdrivers and that didn’t go so well.

Turn machine on high for 999 hours.

Now that you have started the experiment, you can take a nap in the chair.

As a bonus experiment, Janice suggested that you put a houseplant closer to the microwave as an early indicator that harmful affects are occurring. She prefers succulent plants due to their higher water content. Steve thought this was a good idea too.

Our national stop 5G organization has requested that we please send weekly updates so they can track our progress. Their website is www.hemlocksociety.org Look for the link on the left side for 5G self-reporting.

We here at Really Right have also learned that thanks to a generous award from Verizon to the Elk Grove Tea Party, the first five people to livestream the experiment simulating AT&T 5G will get free and safe 4G Wi-Fi for life.