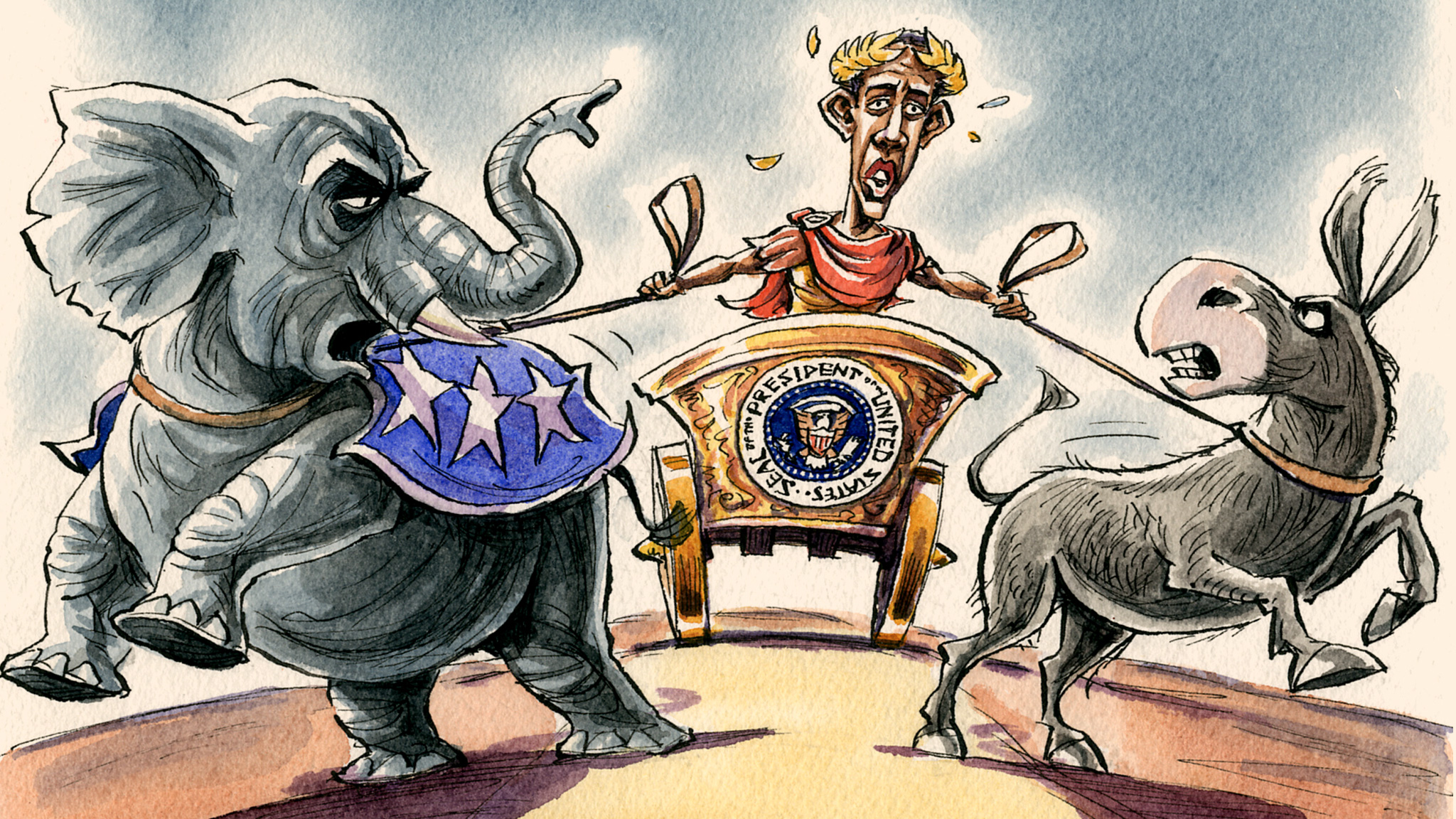 Two stories caught my attention today that are different but related. The common thread is the decline of our country due to departing from the principles of our founding. The first story is from Fox News and I do take issue with the author, as I hope to explain below, and the other is thought provoking.

That question has been asked lately with respect to President Trump’s planned use of federal funds to construct 175 miles of sporadic barriers along portions of the nearly 2,000-mile U.S.-Mexico common border.

After Congress expressly declined to give him that money, Trump signed into law – rather than vetoed – the legislation that denied him the funds he sought and then spent the money anyway.

The question regarding presidential power has also been asked with respect to Trump’s imposition of sales taxes – Trump calls them tariffs — on nearly all goods imported into the United States from China. These are taxes that only Congress can constitutionally authorize.

And the question of presidential power has been asked in connection with the presidentially ordered mistreatment of families seeking asylum in the United States by separating parents from children – in defiance of a court order.

The Judge also goes on to mention the War Powers Act and other powers ceded to the President by Congress.

The Judge also points out that “power abhors a vacuum” and “I have written before that the Republicans who rejoice in this will weep over it when a Democrat is in the White House.”

To which I respond, “Hey Judge, why in the heck do you think we hated eight years of Obama so much? He was using Executive Orders and government regulations for all sorts of illegal and immoral things.”

What I hope Trump will do is undo Obama’s Executive Orders—which he has been doing—and then, unlike Obama, get the Congress to codify his actions into law to put them beyond the ability of another President to undo by Executive Orders. Hence my hope for Trump’s reelection and Republicans to take back the House in 2020.

Folks, I hate the idea of Executive Orders, continuing budget resolutions, and judicial legislation. We have a severe case of all three because Congress will not do their Constitutional duty.

Frankly, I would be OK with Congress rescinding some of the extra Constitutional powers of the President, but only if they are will to do their job. Truthfully, I don’t have any confidence in either Party being willing to truly govern.

I think we are rapidly moving to rule by either an aristocracy or dictatorship. The viability of the two party system is coming to an end. Again, I assert that Trump will likely be the last Republican President ever. The Democrats have put their thumbs on the electoral scales to such an extent that a Republican winning a national election will be mathematically impossible any more. The Republican Party has run its course and will never be an effective political force in American history once Trump leaves office.

This brings me to the second article today, Fall of Rome: Are there lessons we can learn?

Federer takes a survey of reasons that the Roman Empire fell and it sounds eerily like today’s news.

The article dedicates several paragraphs to each of the following topics:

The article is long but for those that care, this is an ominous warning of what lies ahead. I implore you to read it in its entirety.

Judge Napolitano raises three points to whack Trump: the border wall, tariffs, and immigration. I wish to respond briefly to all three.

Every elected official and military member in our country takes an oath that states in part “… I will support and defend the Constitution of the United States against all enemies, foreign and domestic…” The core question is what do you do when your country is being invaded, your laws are being ignored and/or not enforced, and Congress refuses to do their job? The Judge rightly states “power abhors a vacuum” so if you are Commander and Chief, what do you do? Congress and the Judge would have Trump do nothing. Trump was elected on the promise to fix the problem and Congress won’t act because they want to deny Trump a political victory. Congress has chosen to break their oath for short-term partisan political reasons. Trump is acting because he feels that he needs to defend the country.

Tariffs used to be the backbone of funding the national government. It was the primary method of taxation that the founders wanted the national government to use. Once again the Judge is correct that tax policy should be set by Congress. However, there is another factor in the tariff controversy; namely, the defense of the country, which brings us back to the oath of office again. Congress has failed to protect our country from being at the mercy of other nations. This brings me back to the article from Federer.

Rome’s economy stagnated from a large trade deficit, as grain production was outsourced to North Africa.

Gerald Simons wrote in “Great Ages of Man – Barbarian Europe” (NY: Time-Life Books, 1968, p. 39): “As conquerors of North Africa, the Vandals cut off the Empire’s grain supply at will. This created critical food shortages, which in turn curtailed Roman counterattacks.”

For “grain” in the above quote, try substituting “manufacturing–including that required for national defense” and use “China” in place of “North Africa”. Here’s my rewrite:

America’s economy stagnated from a large trade deficit, as manufacturing–including that required for national defense–was outsourced to China.

“The Chinese could cut off America’s source of manufactured goods at will. This creates the potential for critical shortages, which in turn would curtail American’s response.”

Of all powers in the world, China is the largest nation that we potentially could go to war with, so how does it make sense to be wholly dependent on them for our way of life? Both Congress and previous Administrations have been OK with this dependence on foreign powers for our manufacturing and military technology. Without technology manufactured by both Russia and China, our military cannot operate. Without these two nations we have no Internet, communications, missiles, ships, tanks, guns, aircraft, absolutely nothing. We produce nothing and consume everything. This situation is nuts.

Trump is trying to loosen the grip of China on our economy and national defense. Again, Congress is not keeping their oath of office and refusing to act in the best interest of our country. Once again, Congress offers no leadership on this issue.

The statement by the Judge is just an outright lie. The Judge stated, “…the presidentially ordered mistreatment of families seeking asylum in the United States by separating parents from children – in defiance of a court order.”

Sorry Judge but the people in the detention facilities entered the country illegally. They could have filed for asylum in the United States without illegally entering our country. Those that enter by the front door don’t end-up in these places.

Second, no President purposely “orders the mistreatment of families”. Obama reversed the kids in cages thing that you knuckleheads keep wanting to crucify Trump for.

Oh, and a judge ordered it. So what? It’s not the judge’s job to make immigration policy or to enforce it. Many people crossing illegally are doing so with children not their own. That’s the problem with folks hopping the fence. You need to retroactively sort the bad apples from the harmless ones. Not everyone under 18 years of age is a saint, MS-13 anyone? Some adults have criminal histories and if they enter with children they will be separated. If they don’t like it then stay home.

This whole narrative is a bunch of crap. I won’t say it never, ever happened, but we are a good people and it’s not our practice to harm others—unless they’re unborn.

We all agree that the immigration system is broken, but again, Congress has failed to put forward a solution to fix it. Both Republicans and Democrats have simultaneously held the Presidency, House, and Senate and failed to pass a bill, thus in my mind, both parties are without excuse. Bottom line is some people would rather have the issue to campaign on than fix it. If you don’t like what Trump is doing—and like it or not, he’s the only one who is acting—then tell Congress to do their job and keep their oath of office.

I keep telling people that the Democrats are squandering their best chance to get things done that would be good for the country. Trump is willing to work with them but they are not. Whatever history says about Trump, it will not be singing the praises of Congress.

To close with another quote from Federer that sounds eerily like today:

The Roman emperor usurped so much power, that the Roman Senate, instead of ruling Rome and defending the rights of the people, existed only to maintain their own positions. Common people were discourage from getting involved in politics.

The Durants wrote in “The Lessons of History” (p. 92): “The educated and skilled pursued business and financial success to the neglect of their involvement in politics.”