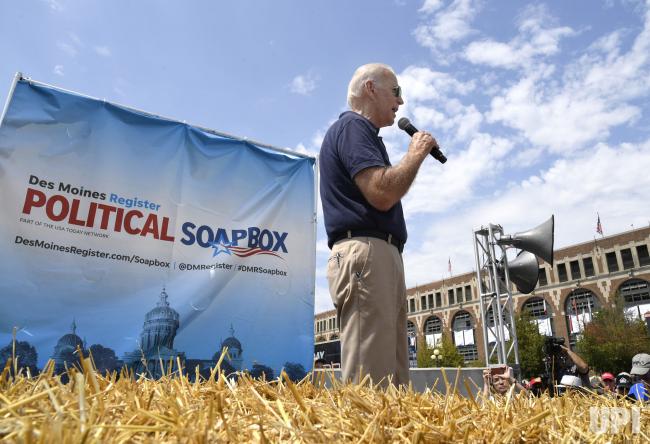 I came across a news story that was such a target rich environment that I couldn’t let it go without comment. Recently, career politician, former Senator, Obama Vice-President, and Presidential aspirant, Joe Biden was stumping in Iowa where he said:

Wow! All three propositions are lies; especially, when said by Democrats. This can easily be proved.

We choose unity over division.

Democrat’s treatment of race is all about skin color or other categories of group identity. They have no use for individual effort. They like claiming the legacy of Martin Luther King while purposely repudiating King’s speech about judging people not by the color of their skin but the content of their character. Such talk is anathema to Democrats.

We choose science over fiction.

Oh yes, that’s why Democrats embrace the fiction of climate change despite no science to support it. Oh, another quick example. Ok. Try this. The Bible says that God made them male and female. This is science. Democrats made-up all the others. That is called fiction.

We choose truth over facts.

The idea that truth is incompatible or at odds with facts is a strange idea.

I looked up the definition of Truth in the Internet. The dictionary listed 11 different definitions:

The reality is that truth is inseparable from facts. If a fact or facts disprove an idea, then by definition, it cannot be true. Given this, what is Biden talking about?

Truth is ultimately a standard that is external to men but knowable by them. It is a measuring stick of information and ideas. Men were created with a knowledge of truth. Truth is a characteristic and attribute of God. God is Truth, Love, Justice, and many other things. Part of being created in God’s image is that humanity reflects—even in our alienated and broken state—the ability to know truth and use reason to learn about the creation around us.

However, the Bible has a warning about man’s ability to know truth. The Apostle Paul wrote a letter to the church in Rome that begins in part:

18 For the wrath of God is revealed from heaven against all ungodliness and unrighteousness of men, who hold the truth in unrighteousness;
19 Because that which may be known of God is manifest in them; for God hath shewed it unto them.
20 For the invisible things of him from the creation of the world are clearly seen, being understood by the things that are made, even his eternal power and Godhead; so that they are without excuse:
21 Because that, when they knew God, they glorified him not as God, neither were thankful; but became vain in their imaginations, and their foolish heart was darkened.
22 Professing themselves to be wise, they became fools,
23 And changed the glory of the uncorruptible God into an image made like to corruptible man, and to birds, and fourfooted beasts, and creeping things.
24 Wherefore God also gave them up to uncleanness through the lusts of their own hearts, to dishonour their own bodies between themselves:
25 Who changed the truth of God into a lie, and worshipped and served the creature more than the Creator, who is blessed for ever. Amen.

God gave men the ability to know truth to be able to know Him; however, certain folks pervert the truth and choose instead to believe a lie.

Lest you think the Apostle Paul has the market cornered on using the word “truth” take a look at the Gospel of John.

John 1:14 And the Word was made flesh, and dwelt among us, (and we beheld his glory, the glory as of the only begotten of the Father,) full of grace and truth.

John 1:17 For the law was given by Moses, but grace and truth came by Jesus Christ.

John 3:21 But he that doeth truth cometh to the light, that his deeds may be made manifest, that they are wrought in God.

John 4:23 But the hour cometh, and now is, when the truth worshippers shall worship the Father in spirit and in truth: for the Father seeketh such to worship him.

John 5:33 Ye sent unto John, and he bare witness unto the truth.

John 6:14 Then those men, when they had seen the miracle that Jesus did, said, This is of a truth that prophet that should come into the world.


John 7:40 Many of the people therefore, when they heard this saying, said, Of a truth this is the Prophet.

John 8:32 And ye shall know the truth, and the truth shall make you free.

John 8:40 But now ye seek to kill me, a man that hath told you the truth, which I have heard of God: this did not Abraham.

John 8:44 Ye are of your father the devil, and the lusts of your father ye will do. He was a murderer from the beginning, and abode not in the truth, because there is no truth in him. When he speaketh a lie, he speaketh of his own: for he is a liar, and the father of it.

John 8:45 And because I tell you the truth, ye believe me not.

John 8:46 Which of you convinceth me of sin? And if I say the truth, why do ye not believe me?

John 14:6 Jesus saith unto him, I am the way, the truth, and the life: no man cometh unto the Father, but by me.

John 14:17 Even the Spirit of truth; whom the world cannot receive, because it seeth him not, neither knoweth him: but ye know him; for he dwelleth with you, and shall be in you.

John 16:7 Nevertheless I tell you the truth; It is expedient for you that I go away: for if I go not away, the Comforter will not come unto you; but if I depart, I will send him unto you.

John 16:13 Howbeit when he, the Spirit of truth, is come, he will guide you into all truth: for he shall not speak of himself; but whatsoever he shall hear, that shall he speak: and he will shew you things to come.

John 17:17 Sanctify them through thy truth: thy word is truth.

John 17:19 And for their sakes I sanctify myself, that they also might be sanctified through the truth.

John 18:37 Pilate therefore said unto him, Art thou a king then? Jesus answered, Thou sayest that I am a king. To this end was I born, and for this cause came I into the world, that I should bear witness unto the truth. Every one that is of the truth heareth my voice.

John 18:38 Pilate saith unto him, What is truth? And when he had said this, he went out again unto the Jews, and saith unto them, I find in him no fault at all.

John wrote other parts of the Bible also. Truth was vitally important to him.

1 John 1:6 If we say that we have fellowship with him, and walk in darkness, we lie, and do not the truth:

1 John 1:8 If we say that we have no sin, we deceive ourselves, and the truth is not in us.

1 John 2:4 He that saith, I know him, and keepeth not his commandments, is a liar, and the truth is not in him.

From these verses we learn that Scripture places a very high value on truth.

Truth is an absolute. The word appears 224 times in the Bible, mostly in the New Testament.

Faith, in the Bible, only has merit if it comes from God for God is the only One worthy of our faith and devotion. Likewise, God’s creation is orderly and reflects His character. Only because of this can we know anything about the world around us. The Western concept of science is based on this proposition.

Biden’s “truth” is not Truth

So, what does Biden mean when he proclaims, “We choose truth over facts.”

First and foremost, Biden means that he, a mere man, is god. Same lie as in the Garden. “… ye shall be as gods, knowing good and evil.”

Biden predetermines what is truth for him and will reject any facts that don’t agree with his presuppositions. Thus, everyone has “a truth” but no one possesses “The Truth.” Hence, Biden embraces moral relativism or as they said in the old days, “… every man did that which was right in his own eyes” (Judges 17: 6b).

So, if Biden’s “truth” is not based on Truth or facts then it can only be subjective and emotional. His credo is feelings not facts; which sums up nicely the state of both Democrats and a whole lot of everyone else.

Stated another way, you get to believe what’s true for you and I can believe what’s true for me and both are equally valid; even when we hold opposite opinions. Over time, this logical fallacy has given way to Political Correctness. All political correctness does is enter the vacuum created by this relativistic worldview and unilaterally proclaim one view valid and the other is banned from the public square and the truth be damned.

Only when you subscribe to the lie that the emperor has clothes can you state such nonsense as “We choose truth over facts.”

In the real world, truth is inseparable from facts. Men conspiring to substitute a lie for the truth gain nothing but their ruination.

Sorry Joe but there is such a thing as right and wrong and you sir, and your cohorts, are in really big trouble. That’s the truth.