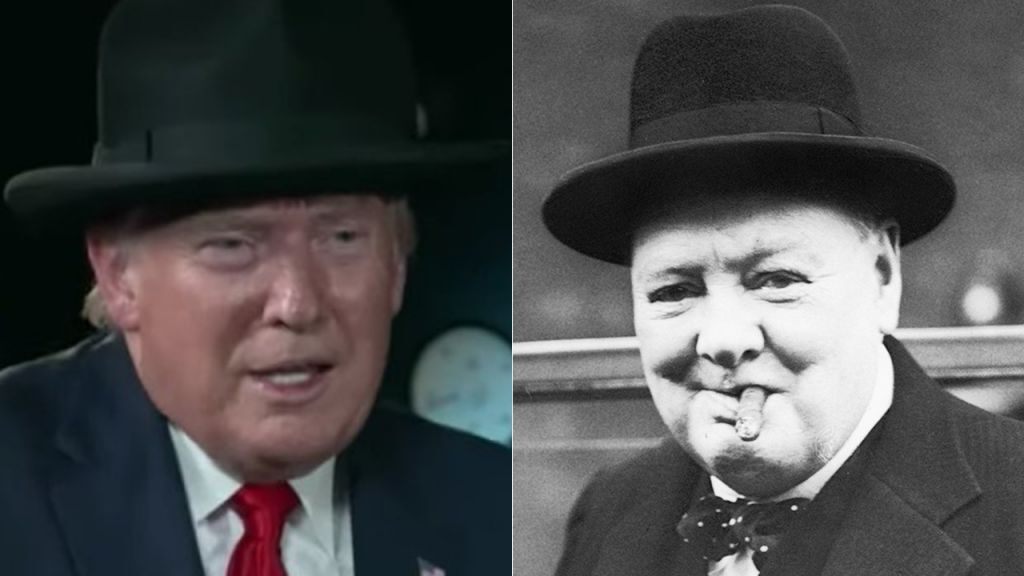 A bust of Winston Churchill was given to President Lyndon Johnson in 1965. It was placed in the Oval Office of the White House until Barry Obama had it removed. When President Trump was elected, Churchill was welcomed back into the President’s office.

The Washington Post has a sympathetic explanation of the details which you can read here.

Trump likes Churchill (which in my opinion is a good deal). On his visit “across the pond” this week, Trump was gifted with a Churchill styled hat.

Donald Trump tried on a personalized version of Winston Churchill’s signature hat when he was given it as a gift during a talk show appearance on his UK state visit.

“This is where Britain’s greatest leader fought the war, and he used to wear these famous hats from the hat maker Lock. We’ve had one made for you,” Morgan said as he handed Trump the hat which was monogrammed with his initials, DJT.

Trump, while wearing the hat said:

“I think Winston looked much better with it,” he said.

This gift to Trump blew–up the Internet.

Oh, Morgan is a friend of Trump. That Trump regards anybody in the media as a friend is the biggest surprise to in this whole incident.

Morgan, a past winner of Trump’s show “The Celebrity Apprentice,” has a close relationship with the president. He was the only journalist to be granted a TV interview with Trump on his state visit to the UK.

My conclusion is that people don’t like it because Trump did it, not because it’s bad to have a Churchill hat.