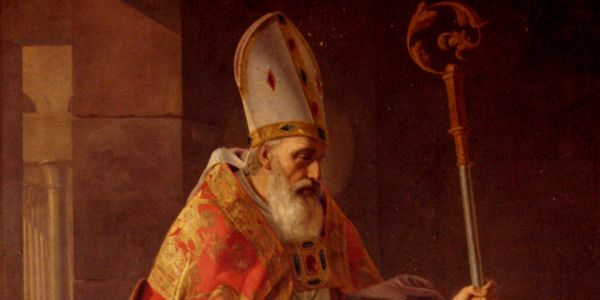 Since tomorrow is Christmas, I thought readers might enjoy a glimpse into the life of Old Saint Nick.

Oh, and yes Virginia there really was a Saint Nick. He loved the poor and had no tolerance for corrupt politicians or heretics.

The history of Nicholas is blurry, but there are many legends associated with the man. Apparently, after his parents died, he inherited their fortune and chose to distribute it to the needy. Most famously, he lobbed bags of gold through the windows and down the chimneys of three sisters who had no dowry to allow them to marry.
Soon, Nicholas became bishop of Myra, the city where he preached.
Ted Olsen, assistant editor of Christian history at Christianity Today, wrote that “it wasn’t long before Diocletian and Maximian began their persecutions of Christians, and the new bishop was imprisoned.” However, when Constantine assumed emperorship, Nicholas was released with many other persecuted believers and he returned to preaching.
After his release, Nicholas became a defender of the faith against Arianism, a heretical doctrine which asserted that Christ was not the Son of God, but a being nurtured by God the Father to the position of Son of God. Saint Nicholas reportedly traveled to the Council of Nicea and actually slapped Arius in the face in defense of the Gospel of Christ.

FYI: today we know the modern followers of Arius as Jehovah’s Witnesses. They claim Jesus was the greatest created being. In contrast, historic Christianity summarized by the Creed maintain that Jesus was, “begotten not made…”

When the first major heresy – the Arian Heresy – began to split the Christian Church, Constantine ordered all the bishops to go to Nicea to settle it, which they did by writing the Nicene Creed. The tradition is that St. Nicholas attended the Council of Nicea and was so upset at Arius for starting this heresy that he slapped him across the face. Evidently, Jolly Old St. Nick had a little temper!
Nicholas preached against the sexual immorality Artemis or Diana fertility worship, as did the Apostle Paul according to the Book of Acts, chapter 19.
The Temple to Diana at Ephesus was one of the Seven Wonders of the Ancient World, twice as big as the Parthenon in Athens, having 127 huge pillars – and temple prostitutes. It was the Las Vegas of the Mediterranean world. Nicholas’ preaching led the people of Myra to tear down their local temple to Diana. Shortly after, from the preaching of St. John Chrysostom, Archbishop of Constantinople (A.D. 397-403), the people tore down the temple to Diana at Ephesus.
Nicholas confronted dishonest government politicians. One story was of a corrupt governor who was about to execute some innocent soldiers in order to cover up his misdeeds. Nicholas broke through the crowd, grabbed the executioner’s sword, threw it down and then exposed the governor’s evil plot. The governor, realizing that Nicholas had no way of knowing his plot except by insight from God, fell on his knees and begged Nicholas to pray for him.

Why everyone should know real story of St. Nicholas