We all know that whenever necessary, Democrats will cheat at the ballot box. This is nothing new. You can go back to the 1960 Presidential race between Nixon and Kennedy. Nixon was winning until the dead vote in Chicago came in and stole Illinois from Nixon.

As the years have gone by, the election results have grown more and more ridiculous. Democrats manufacture voters out of thin air each and every election. It’s how they roll. In the last Presidential race some counties had more votes cast than adults living in them. Often precincts will have over 130 percent voter turnout. This is not unusual; especially in Liberal strongholds. Please note that this phenomenon doesn’t happen in Republican areas. Earlier this month, Broward County in Florida has 200,000 more votes cast than registered voters. Despite this fraud, Republicans still won the US Senate seat and Florida Governor’s race.

Now this out of Orange County California; how is it that the Republican candidate for Governor John Cox won the county but every congressional seat went to Democrats?

While the county went for Republican John Cox over Democrat Gavin Newsom in the governor’s race, all six House districts were won by the Democratic candidate, points out the Gateway Pundit’s Jim Hoft.

In 2016, the Republicans won four of those races.

Hoft believes voter fraud could be an explanation for the split-ticket voting.

He points out that 299,931 more Democrats voted for the Democrats in the Orange County congressional races than voted for Newsom for governor.

Hoft cites a reader who argues Cox “ran a horrible campaign and was virtually invisible.”

“I find it hard to believe that voters would split the ticket — voting R for an unknown guy Governor and D for a super liberal congressperson,” the reader wrote. “Just seems like a BIG red flag.” 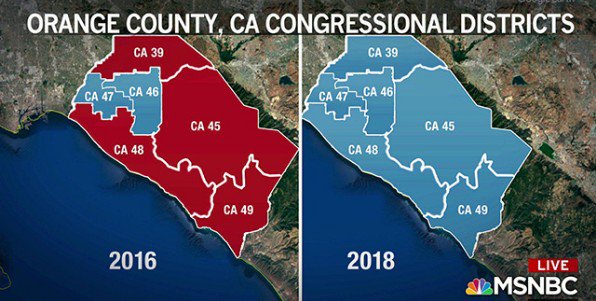 At the same time voter fraud is rampant, I find it curious that there is only one acknowledged instance in California. Back in September, the Los Angeles Times ran a story about voter fraud on skid row.

So investigators were not completely surprised to find homeless people there taking $1, food or cigarettes to forge signatures of registered voters on petitions to qualify initiatives for the ballot, police said.

Fox News ran a follow-up story yesterday because the wheels of justice have begun to turn in the case which stems back to May.

The Los Angeles County District Attorney’s Office says it is charging nine people in total with felony counts related to the offenses, which are said to have happened during the 2016 and 2018 election cycles.

Some of the nine charged were identified as Kirkland Kauzava Washington, Harold Bennett, and Louis Thomas Wise – who are each facing eight counts. The others: Richard Howard, Rose Makeda Sweeney, Christopher Joseph Williams, Jakara Fati Mardis, Norman Hall and Nickey Demelvin Huntley, are each facing four counts. Their ages range from 28 to 62, and each could end up having to serve a maximum of around five to six years in prison if convicted.

I guess that now that the elections are over, they can prosecute the token offenders.

In May, Christine Hooks, a signature gatherer, set up a card table at 6th and San Julian streets, Joseph said, and opened for business at 5:50 a.m., when homeless people were breaking down their tents and likely to be the only ones around.

Hooks, 30, who police said was homeless, allegedly told them she had downloaded voter registration lists off the internet, Joseph said. The lists were of people from Orange and San Diego counties and Monrovia, Joseph said.

People hired to get initiatives on the ballot are often paid by signature, typically $1 to $2, although a recent glut of proposed ballot initiatives has pushed the rate as high as $6 a signature, officials said.

But they can’t pay people for signatures, and having them forge signatures off registered voters lists is an obvious violation.

“It’s not really voter fraud, in terms of illegal voting and manipulation,” Logan said. “But I am certainly concerned about any activity that causes voters to lose faith in the process.”

Why are the only folks getting singled out for fraud the homeless? Since no photos of these guys exist, it is a safe bet that they are probably black. Lest you think I’m racist, to the contrary, I’m accusing these folks of racism since as we learned with the BOE fiasco, only the black Democrat gets thrown under the bus by fellow Dems.

If you go back to the original reports of these arrests in May, the NBC Los Angeles story concludes with this killer quote from local election officials, “This is the first voting fraud arrest that they can remember, ever”.

Please note this is the only arrest, ever. Really, in all of Los Angeles County? This claim was made in 2018 despite the fact of such well known cases of fraud as this back in 2016:

The Los Angeles County Registrar is investigating how 83 ballots were sent to a single address at a San Pedro apartment.

The unused ballots were found on Saturday by tenant Jerry Mosna, sitting on top of the mailbox center at his apartment building in San Pedro.

The ballots were all addressed to a two bedroom apartment upstairs from Mosna’s, belonging to an 89-year-old woman.

To faithful readers, if you are getting the vibe that this particular prosecution is not a coincidence then congratulations. This arrest and prosecution are remarkably similar to the campaign model used to abolish the Board of Equalization 18 months ago. The “tell” is buried in the LA Times article quoted above which happens to mention this gem:

See if this outline looks familiar:

1.    Bills are introduced in both the Senate and Assembly. In this case, to abolish paid signature gathering

2.    A high profile event happens to highlight the problem.

3.    Politicians pile-on decrying the ill addressed by the bill.

4.    As a result of the campaign, bill successfully navigates both chambers of the Legislature.

If you compare the timeline of the bill’s travel through the legislature with the timing of the original arrests, it dovetails rather nicely. Both AB 1947 and its companion bill SB 1394 were voted out of their committees and sent to the opposite chamber within days of the initial news reports of fraudulent signature gathering.

Despite the veto, there’s no doubt that this bill will be back again next session with a new Governor ready to “do the right thing” by signing.

The interesting corollary to this story of voter fraud that isn’t voter fraud is that government can point to this single instance as proof they are doing something. Thus the status quo is preserved and symbolism over substance wins again.

Conclusion: voter fraud is the purview of the establishment. All others beware!