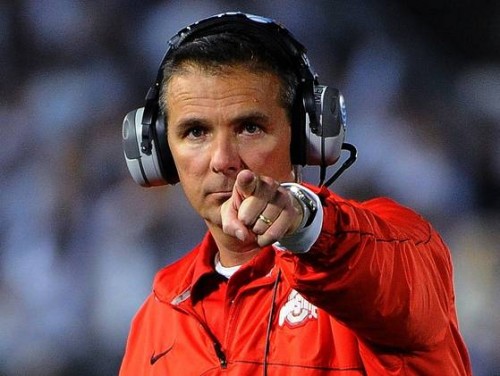 Just to be clear I’m being somewhat facetious here but I no longer trust this wannabe.  Meyer is the definition of a modern day Pharisee; which for those non-believers or those who attend Catholic service on Sunday but seldom listen, a Pharisee is someone who is self-righteous and a hypocrite.  Meyer who as was previously detailed in this space is a master of public relations, having coached both Aaron Hernandez, and Tim Tebow at the same time!  Hernandez being best known for killing at least 2 people and “allegedly” killing 2 more, killed himself in jail earlier this year.  Tebow of course being known as the heir apparent to the papacy when Pope Francis decides he wants to step down.

All kidding aside Urban Meyer’s Florida teams were some of the best I have ever seen, winning 2 national championships and could have played for a third had they not run into a buzz saw known as Alabama.  In January of 2009 he was admitted into the hospital, saying he was not going to resign but would be ready for next season…Urban lied, and coached the bowl game in January.  Following this game, he announced he would take a leave of absence, funny how this occurred after Tebow, Hernandez and the rest of the felons were leaving Florida.  Meyer returned in 2010 and proceeded to have his worst year at Florida, 7-5. He resigned at the conclusion of the year citing health reasons relating to his heart.  Yeah, read that again, his heart!  Probably the one human organ that can single handedly make your spouse a widow in a matter of minutes.  This dude apparently coached all year having heart issues….I call BS.

So then Meyer literally started working for ESPN calling games, so think brutal travel schedule, preparations during the week and sitting through some of the best college football games literally eight months after resigning.  Again…BS.  Then the Ohio State job opened up prior to the year starting, and suddenly I knew his plan all along.  He knew the cupboard was empty at Florida, but Ohio State had a scandal ridden coach leave, and now he could swoop in.  The white knight was back in business, and this all went down before the end of November 2011.  His third year at Ohio State, he won the national championship.  You can’t write a better script.  Earlier this season he was suspended due to the actions of one of his assistant coaches, but ole Urban had ‘em up and running; cruising into last week’s game against lowly Purdue undefeated.  Purdue beat ‘em 49-20, then something weird happened Tuesday 10/30.  Meyer called a press conference and once again citing health issues, this time a cyst on his brain diagnosed in 1998!  Is a reason for his possibly wanting to resign when “he can no longer give his all for Ohio State.”  Apparently he fell over on the sideline during a game a few weeks ago.  Yet he has been able to coach this entire time leading up to his one embarrassing loss.

I’m not impressed.  Honestly, far be It from me to accuse someone of being a liar, but this guy checks every box.  Seems like once things start to go against him he has to find a convenient excuse to exit stage right.  I’m sorry for your health issues, but I would be remiss if I didn’t say this, but you’re insufferable.  You somehow go out of your way to make it all about you all the time, even though you “allegedly” lead a college program.  Best of luck with your “health issues” that are over 20 years old.

I just call BS on this one…again.