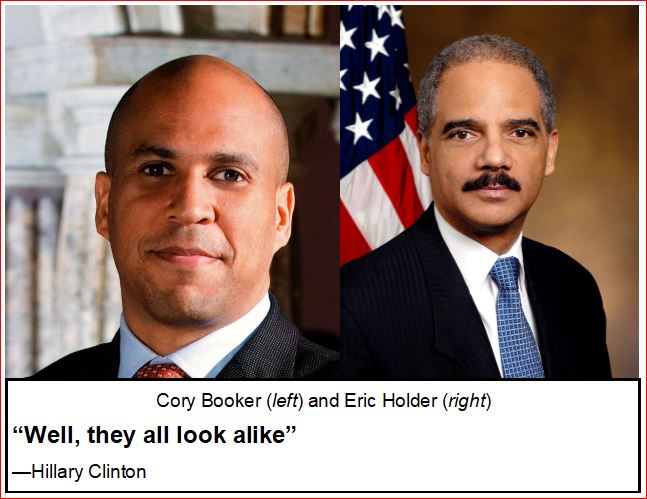 “Better to remain silent and be thought a fool than to speak and to remove all doubt.”

Whether Abe Lincoln actually said this or not, it is advice some folks in public life should heed.

This slightly restated variation should also be taken to heart:

“Better not to be thought of as a racist than to open your mouth and remove all doubt—that you are.”

Last Friday, enter one, Hillary Rodham Clinton, who was being interviewed by Kara Swisher of the New York Times.

Ms. Swisher did mix up Eric Holder and Cory Booker, which led to Mrs. Clinton saying, “Well, they all look alike.”

This is the same interview where Clinton said she would like to run again in 2020; well maybe.

Mrs. Clinton initially said “no” when asked whether she wanted to run for president again. She then paused and repeated “no.”

But after Ms. Swisher noted the slight hesitation, Mrs. Clinton seemed to reconsider her response, saying that a major task of the next Democratic president will be improving the international standing of the United States.

Hillary Clinton on Possible 2020 Run: ‘I’d Like to Be President’

Not to be outdone by Clinton, Democrat Senator Joe Donnelly of Indiana removed all doubt.

Indiana Sen. Joe Donnelly – one of the most vulnerable Democrats heading into next week’s midterm elections – is taking heat after awkwardly responding to a question during Tuesday night’s Senate debate with Republican Mike Braun by saying several of his staffers are great at their jobs even though they are minorities.

“Our state director is Indian American, but he does an amazing job,” Donnelly said during the debate. “Our director of all constituent services — she’s African American, but she does an even more incredible job than you could ever imagine.”

“Holy cats. Watch this clip. I can’t believe how terrible this is,” said Josh Holmes, a Republican operative and former chief of staff to Senate Majority Leader Mitch McConnell.

Others argued the comments would be considered a big gaffe – if said by a Republican.

“Had it happened on the other side, I think it would be getting a lot more attention,” Braun said Wednesday on Fox News’ “The Daily Briefing with Dana Perino.”

“Can we just be honest and say that if Mike Braun had said this it would be an issue but it won’t because Donnelly is a Dem?” Fox News contributor Lisa Boothe said.

Folks, part of the problem is that these elitist Democrats don’t see people as people, they see everyone in terms of groups and quotas.

These bogus heirs of Martin Luther King violate the principle at the core of his “I Have a Dream” speech when King states:

I have a dream that my four little children will one day live in a nation where they will not be judged by the color of their skin, but by the content of their character.

Democrats only care about the color of your skin or which bodily orifice you prefer to stick your reproductive organs into and not what’s on the inside of a person. They hijacked this Republican minister (Dr. King) and his push for true equality and substituted a fake solution in its place. King wanted a bottom-up solution (this is the core of the Christian Gospel) and the Dems want a top-down (State imposed) one. King wanted to change the hearts and minds of people not impose a solution by force.

This circles back to the post yesterday about Vice-President Mike Pence and Jews. One core assumption of the author of the hit piece on Pence, et al, was that a Messianic Jew—Loren Jacobs— was not a proper representative of the group. His activity in the community or whether he had been scheduled to speak prior to Saturday’s Synagogue attack were never researched or addressed by the author. The author was much more concerned that a Messianic Jew was not a proper representative of the group. Jacobs’ individual merits were irrelevant to his right to be on the stage at a Republican event.

Democrats are the Party of white supremacy and historically always have been. Dinesh D’Souza documents this well in his film, Hillary’s America: The Secret History of the Democratic Party (2016).

I marvel that Democrats can say stuff like the above all day long but get a pass while Republicans are ALWAYS presumed to be racist for believing in the value and worth of individuals.