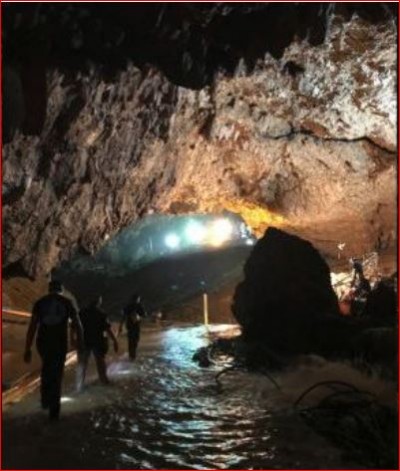 Reports are in this morning that the Thailand soccer team is saved from the cave they were trapped in for several weeks. The twelve boys and coach are all safe. Some rescue workers remain inside and must still find their way out. The fact that only one rescue worker lost his life and the whole group was recovered alive is a miracle.

The dramatic three-day rescue of a Thai youth soccer team that had been stuck in a flooded cave came to an end Tuesday when the last boy and the team’s coach were plucked from the underground cavern—more than two weeks after they became trapped, Navy officials said.

The Thai Navy SEALS said on Facebook all 12 boys from the team and the team’s coach were out of the cave. Four rescuers, a doctor and three Navy SEALS remained inside.

The linked article is worth a read just to see the illustrations of what it took to get the kids out.

As this drama has been unfolding over the last several days, I began wondering about children’s safety in a different sort of cave. One that was warm, and actually has a steady supply of food and water. Sadly, in our supposedly civilized and medically advanced country, the fatality rate for these children during most of my lifetime has been over thirty percent.

I think a death rate from any cause approaching one in three is unacceptable. Doubly so when it is totally preventable by just letting nature take its course. But herein is the problem, folks don’t want to do that.

That’s where a guy like Donald Trump comes into the picture. You see, Trump is concerned about this issue and would like to do something about it. That’s why last night he nominated Brett Kavanaugh to the US Supreme Court. Kavanaugh may not be the first choice of many conservatives but he has a strong track record of reigning-in the power of the federal bureaucracy.

In the first, he found the Consumer Finance Protection Board (CFPB) violated the Constitution because it vested all power over consumer finance in the country in one person, but insulated him from removal by the president.

In the second, he struck down a new federal accounting board, because it too was insulated from presidential control, even though Article II of the Constitution vests the president, and the president alone, with the duty to see that “the Laws be Faithfully Executed.”

In both cases, Kavanaugh has made clear that he would put the text and history of the Constitution first, and mistaken precedent second, which should cheer the hearts of conservatives.

Trump’s Supreme Court pick: Democrats will fight hard to stop Kavanaugh but he has few vulnerabilities

With at least two more picks left (replacing Thomas and Ginsberg), Trump will fundamentally reshape the Court so that children are safe and protected in their mother’s womb. Yes, California and New York may not be safe for unborn children when Roe is toppled but for many, there will be states of refuge where life and not selfishness are the values of the land.

Ruling against a radical abortion claim. In his one foray into the abortion arena, in a very contentious recent case involving a pregnant unaccompanied-alien minor being held in HHS custody, Kavanaugh objected to his court’s grant of relief to the minor. In his dissent, he complained that the majority concocted “a constitutional principle as novel as it is wrong: a new right for unlawful immigrant minors in U.S. Government detention to obtain immediate abortion on demand.” The majority’s decision, he said, “represents a radical extension of the Supreme Court’s abortion jurisprudence.”

Judge Kavanaugh is admittedly a “safe” choice for Trump but he should be more solidly conservative than Anthony Kennedy. The real fight will be to replace Ginsberg and give conservatives and constitutionalists a super majority on the Court.

At the end of his administration, Trump will leave the country better off than it was when he took office. If his Court picks are as good as I hope then perhaps the scourge of surgical abortion will go the way of slavery. As the good doctor once said, “A person is a person no matter how small.”