Ted Hickman, a city councilman in Dixon, CA, has really irritated the Left and made them forget all about their hatred of Donald Trump…at least for a while. You see, on his blog, Ted declared July as SPAM… Straight Pride American Month!

Ted is even on the ballot this November so as you read this, you can marvel as I do at his perky sense of humor. Sadly the Left is not laughing but suffering an aneurism.

…I am proclaiming July as NOT LGBTQ-WTF aka… Straight pride month… You know…  I hereby resolve that I proclaim the month of July to be celebrated as… I am proud to be a heterosexual, monogamous, married to the opposite sex, straight individual that knows what goes where and why. But I’m not going to try to shove this down you throat, so to speak, you can be one or not, that’s your choice. 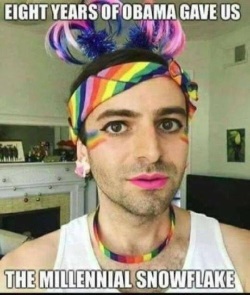 Last Sunday ended LGBTQF-WTF month Yea! (*Don’t get me wrong I support the First Amendment, as much as the next person, and support the rights of grown men to wear skin tight short-shorts and go-go boots and don tinker bell wings with wand and prance down the streets of San Francisco) with tens of thousands of folks dancing and prancing all over American celebrating the fact they are different than most of the rest of us and showing their “pride” in being so.

Now before anyone gets their pantyhose in a knot, this is not really legally anti anything; instead it’s pro-family; and proud to be a straight American, and me expressing a private opinion… So there! If you remember last week I proclaimed the Month of July as SPAM …(Straight Pride American Month)…(as Vice Mayor don’t know if I can, but what the heck). Now hundreds of millions of the rest of us can celebrate our month, peaking on July 4th, as healthy, heterosexual, fairly monogamous, keep our kinky stuff to ourselves, Americans… We do it with our parades in every state and county in this country with families celebrating together. We honor our country and our veterans who have made all of this possible (including for the tinker bells) and we can do it with actual real pride, not some put on show just to help our inferior complex “show we are different” type of crap. We ARE different from them…We work, have families, (and babies we make) enjoy and love the company (and marriage) of the opposite sex and don’t flaunt our differences dressing up like faries and prancing by the thousands in a parade in nearby San Francisco to be televised all over the world… *And yes, before it becomes an issue, I do believe in faries; I’ve seen them in SF for myself.  Let’s see if I can remember the Peter Pan story about believing in faries…oh yeal, so according to “Wikipedia” faries are powered “bypiezoelectric” crystals which can be energized by sound waves like made by clapping. So, right now if you don’t want any faries to expire, you can clap your hands. See, I do have a heart I just can’t type and clap at the same time… so I had to make a hard choice didn’t I?

Ted has stones to put this stuff up on the web. As a result, he has the Huffington Post, local and regional papers, television stations, and folks all over the Left upset that he dares to stand-up for the rest of us and mock the “rainbow people” for their moral nakedness.

So be thankful on this Independence Day (‘cause every country has a July fourth on their calendar but only America Celebrates our independence on this day).  Thanks to veterans and people that sacrificed to make this country what it is, and still do. And mostly be thankful for regular guys like Donald J Trump and Ted Hickman that believe that America needs to be made great again. So, enjoy the fireworks on the web and in the sky tonight. Oh, and happy SPAM month. Enjoy it, we’ve earned it.