First some history. CALPERS (California Public Employees Retirement System) is for civil service (Union) employees at state, county and local levels; excluding teachers as they have a separate pension provider.  California also has one of the most generous pension formulas in the entire country, even with the recent changes enacted by Supreme Ayatollah Jerry Brown. (Note that the State’s pension reforms are not retroactive but only affect new hires.)

In California we have a defined benefit plan, meaning we use a calculation that comes up with an amount of money that the retiree will get monthly for the rest of their life.

Defined Contribution
In the “real world”, you might have four percent of your wages set aside in a 401K or other pension plan. Then your employer will kick in an additional amount, say two percent. Whatever you manage to squirrel away in your working years is yours to live off of in retirement. This is called defined contribution.

Defined Benefit
The amount taken from a state employee’s check has nothing to do with the amount they get in retirement. As long as a state retiree draws breath, he draws a pension.

Example. You start at 25 years old and work until 55 years old. 30 (years of service) times 2% equals 60%. You get 60% of your highest year base salary as your pension. If your highest base was 100K you now get 60K to do nothing. They usually have a cost of living increase every year as well.

Here is an actual table from CalPers showing how it works:
URL: CalPERS Tier 1

If you have completed 20 years of state service then government also pays your medical insurance. 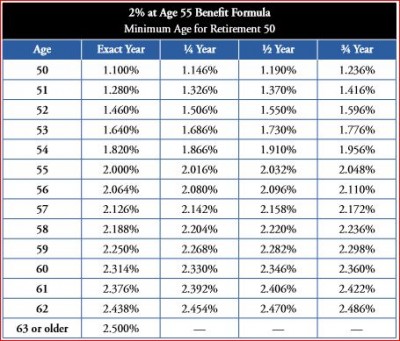 It is not uncommon for many civil servants to retire at between ages 50-55 because “they make more money retired than still working” because retirement checks can be more than net pay while working. Couple that with life expectancy which until recently is getting longer and longer and it’s no wonder that some workers are collecting pension checks for longer than their number of years worked.  The system was not designed to work this way.  Worse yet, the generation currently entering retirement years—the generation age 50 and up—are doing everything in their power to destroy future generations long after they die.  I will outline this below.

Games People Play
Gaming the overtime system, is a big part of the pension issue. This abuse is most prevalent with prison guards and public safety workers.  Between having a colleague call-in sick or not being at work because they are enjoying the generous vacation policy while feeding at the government trough, those that wish, have abundant opportunities to work overtime shifts. Some more egregious examples in recent media reports include a BART janitor sleeping in a closet while claiming he works 20 hour shifts and CalFire firefighters that claim to work several days straight when in reality they were drinking and partying it up while on duty!  No one seems to miss a chance to game the system.

Oh by the way, when a union renegotiates its contract with the state, or any other municipality, it frequently includes retroactive pay and bonuses for its members.

Other cases include: applying for the same job in a more expensive area (think the bay area or coast) to get a major salary boost for the sole purpose of juicing your pension by an extra $400 or so a month!  This is known as pension spiking.

My personal favorite, promoting a colleague who intends to retire in a couple years, but due to his accrual of 999 days of sick leave he continues “working” by calling out sick for 3 years.  Nice gig if you can get it.  This cheating is very widespread, it’s going on everywhere.  There are quite a few more stories but it sounds like there is more juicing going on in the public worker sector than in all of Major League Baseball during the 2000’s.

Pension Crisis in a Nutshell
This gets me to the meat and potatoes of this blog.  If your city, municipality, county, transportation agency, etc. belongs to CALPERS then they have to pay a set amount of money annually into the pension fund to cover the costs of their retirees.  For most of these municipalities, those costs are somewhat manageable right now, accounting for roughly 10% of their annual budgets.  Again, I said somewhat because in 2023 it will balloon to 18% of their total budgets with the increases CALPERS is charging them to participate.

This will become an even bigger issue at some point. Right now we are in a period of economic growth—even though wages aren’t growing—but what happens when we have a major recessionary event?  One that lasts several years, like during the Bush/Obama years?  My main cause for sounding the alarm now is that cities are already claiming to be strapped for funding to do even basic things like road work.  Have you seen a government entity’s pay scale?  Guess what? It’s nothing like the private sector; every single year you get an increase, with its steps and columns.  In addition to great salary, and benefits, when was the last time the government actually laid off any workers?  (Hearing crickets) In the private sector as has been detailed here and elsewhere, when your company has a bad quarter, a percentage of the workforce is terminated.

Again, we have current and future pension funding issues and the number of government workers and retirees continues to grow not shrink.  Just think about it. When President Obama or Governor Brown talked about creating jobs, it was the government sector that they were growing most.

Is There Hope
Now how to combat this issue?  Well honestly there is no attainable answer.  The problem is the unions along with local and state politicians control everything about this.  As we have chronicled before, government doesn’t even show future pension obligations on their financial statements. They only care about the current fiscal year. This is GAAP accounting for government entities. Want to change the contribution amounts for state workers?  Meet the same fate Gov. Arnold did, when his special election propositions went down in flames.  (This election is what caused Arnold to reject any pretense of Republican values.) Try to raise the contribution by the worker by just half a percent, the union and the workers will literally scream bloody murder.  If you are a Democrat politician and you try to change the rules for retiree pension plans, may God have mercy on your soul (if you are a believer) because you will most certainly be on the receiving end of several million dollars in attack ads aiding your opponent next election.

Since nothing gets done at the elected level, cities and interest groups choose to push through initiatives for sales tax increases.  These increases are packaged and pushed as “we need to hire more police” or “The District Attorney won’t prosecute low level crimes without this tax hike.”  This is baloney, because the government doesn’t follow through at all. They use a straw man argument to play to your emotions to get you to agree to a tax hike that funds legacy pension costs.  My understanding from the Blog Father is Sacramento County tried to do this with Measure B, the sales tax to fix and repair roads, it BARELY failed at the ballot box.  CRA didn’t take a stand on this by the way.  (Note: CRA contacted me via the Sith Lord and said they took offense at this remark by Mr. X and did vote to oppose Measure M. I know that CRA never submitted a ballot argument against Measure M but I did.—editor)

My point is they play to your emotion by using fear, the phone may not be answered at 911 because there won’t be any police on the streets, or your house will burn down because the firefighters won’t be able to make it to your house in time. Even trying to chip away at these pension benefits comes with a steep price.  John Chiang has been one of the most vocal in California about this, and he is barely registering a blip in the polls for governor.  The big question is, what happens when these sales tax increases don’t pass?

Last month, the Legislature actually had several chances to take a crack at mending the pension system.  The two hero legislators were John Moorloch from southern California, a Republican, and Steve Glazer from the Bay Area, a Democrat who used to work for Brown, put forth 3 different bills.  None got a hearing with the state senate committee charged with overseeing public retirement plans.  Glazer wanted a switch from the defined benefit plans to 401k plans to attract a younger work force that maybe doesn’t want to be in civil servant for life.  Moorloch wanted to slow down cost of living adjustments until CALPERS gets more solvent. Basically saying the next recession could bankrupt it.  The chair of that committee said it best, I want more people on defined benefit plans than 401k plans.  Take note, the private sector has very, very, few pension plans left.

In reality, taxes, fees, and fines (like traffic tickets) will be raised and be more plentiful due to cities needing to collect more revenue to balance budgets.  This is why your red light (Cooper Cam) violation cost $600.  It’s not because they want you to feel financial pain but they need to balance the budget.  Sales taxes can help somewhat, but tickets help the most.  We will see if Prop 13 survives this CALPERS assault on city budgets as well, I bet it won’t—especially after November.

Don’t forget that should California finally go bankrupt, the Legislature has put the union pensions first in line. As it stands now, by law, retirees will be paid in full before anyone currently working for government gets a dime of state money. I wish someone would take this pension issue to court before we get to the breaking point, as it will likely take 2 federal judges and the Supreme Court to rule this unconstitutional. But in the meantime the public pension racket in California is the union’s golden goose and is untouchable.

Hope I made you think a little,