The cancer that began propagating in the NFL last year by currently unemployed San Francisco Forty-niner Colin Kaepernick has become a plague upon the nation because the National Football League failed to act in a proper manner. Sorry but when an employee is at work and wearing the uniform of his company, he is not free to say and do whatever he wants.  This myth of an unrestricted right to free speech is a bald-faced lie.

• Can a theater worker (we are limiting this discussion to speech by employees) shout “Fire” in the middle of the movie?
• Can you call the White House and say “I want to kill the President” and nothing will happen to you?
• Can you call your local school and threaten to shoot all the dumb (insert racial or ethnic group here) and not get paid a visit by the SWAT Team?
• Can your doctor tell you that you have six months to live and you aren’t really sick?
• While at work can I call a retired person and tell them to pay their bill or we will garnish their bank account and retirement because they owe us money? (FYI we can’t do either.)
• Can an NFL player celebrate in the end zone by mooning the crowd and not be fined?

Clearly, a right of speech is not unlimited. When you—as an employee or representative of a group—say or do something, it reflects not just upon your conduct but that of your employer.

Don’t believe me, try it. I doubt any of the above examples would be defended by an employer anywhere. However, even if the employee lost their job as a result, the employer would likely still be writing a check to someone once the lawyers got done with him.

So why is it OK to have a stupid protest during the National Anthem to defend the rights of people that say it’s ok to kill policemen because they are bad and only want to kill people?

Kaepernick started to protest the National Anthem for this very reason. He wants black people to have a special right to not have to obey policemen when police have drawn their weapons in the performance of their duties. Sorry, Kap but that’s what lawyers are for. If you won’t obey an order from a policeman, especially when their weapon is drawn, then you deserve to be shot like a mad dog.

This isn’t a racial issue, its common sense that law abiding people are expected to behave this way; period.

On Friday, President Trump said what most of us feel about this issue,
“Wouldn’t you love to see one of these NFL owners, when somebody disrespects our flag, to say, ‘get that son of a bitch off the field now. Out. Out. He’s fired!’”
Link: Trump SOB quote

My answer is “hell yes” that should have happened to Kaepernick a year and a half ago.

Because the NFL failed to act responsibly, this has been politicized by the Left as another front of their “Operation Chaos” to try to bring down Trump. Sorry dudes but Trump is right.

The movement is now spreading to other sports venues.

In the spirit of the times and not content to keep their mouths shut or do the right thing, the Elk Grove Join Unified School District has waded into the fray as well. This email was sent to employees of the District earlier today.

The purpose of this communication is twofold. First, thank you for all you do to support our students and your fellow colleagues. Your efforts are recognized and appreciated. Second, given recent events, I would expect that some students and staff members will elect to exercise their right to freedom of expression in a variety of manners. Such expressions could include sitting or kneeling during patriotic observances, including the Pledge of Allegiance or the National Anthem. While these are two of the most common ways people express themselves, I always marvel at the creativity of our students and staff and would not be surprised if they came up with other methods to express themselves.

Please do not overact or take disciplinary actions in response to such expressions. Site leaders should confirm this with staff, including off campus coaches, to ensure all staff understand that no punitive actions are to be taken against students or staff participating in an act of expression that does not interfere with the safe and orderly running of our schools or school sponsored events.

Please note what a crock of crap this is. What the District should have said was:

We respect our country and what it stands for. Our nation is not perfect but it’s the best country on the planet. When a student is representing our school at any activity, they shall not politicize the event by disrespecting our flag or anthem. Many millions have fought and died so that you could be here today. The things that united us are bigger that those issues that divide us. Lasting change is made by working thru the system not advocating its overthrow. We do not condone any course of action that advocates the murder of law enforcement in the performance of their duties. We have a zero tolerance for interjecting politics into patriotic expressions. School activities—including athletic events—are political free zones.

Hey EGUSD, just so you know, I now have a reason not to give money to any of your schools for fundraisers—especially for the support of athletic teams.

Laura Ingraham wrote a book that fits this situation; “Shut up and sing”. 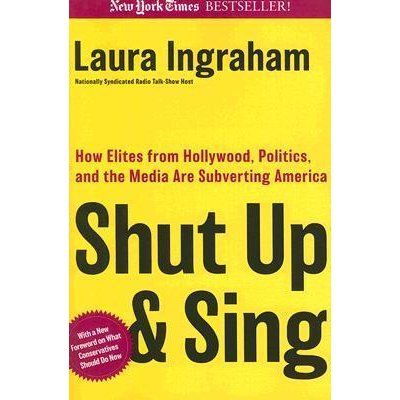 Or if you rather, Tim Hawkins did a version of Imagine:

Imagine all the actors
the musicians too
would stick to acting and singing
with no political views.

Bottom line is athletes should shut up and play ball. If America is so bad try moving to Iraq (or some other third world cesspool) and being on their soccer team. In the good ole days, their players were tortured when they lost.

Footballers who paid the penalty for failure: How Uday’s terror made the game a matter of life or death

I’m sure North Korea is no different so I checked:
North Korea to Olympians: No Medals Means Labor Camp

Our guys get paid millions for playing a stupid game. The ungrateful snowflakes should respect the opportunity given to them just because they live in this country. If they want to do something meaningful how about cancelling a practice and going to Texas, Florida, or Puerto Rico and helping folks that appreciate it? Try uniting us and not dividing, you might be surprised how many folks will support you.