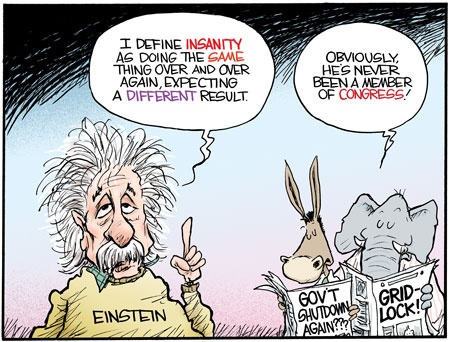 For us in the real world, the pop culture definition of insanity comes to mind when we look at articles like on that recently appeared in the free side of the Wall Street Journal.

The headline says it all:

Brian Harmon had just finished spending over $300,000 to fix his home in Kingwood, Texas, when Hurricane Harvey sent floodwaters “completely over the roof.”

The six-bedroom house, which has an indoor swimming pool, sits along the San Jacinto River. It has flooded 22 times since 1979, making it one of the most flood damaged properties in the country.

Between 1979 and 2015, government records show the federal flood insurance program paid out more than $1.8 million to rebuild the house—a property that Mr. Harmon figured was worth $600,000 to $800,000 before Harvey hit late last month.

Homes and other properties with repetitive flood losses account for just 2% of the roughly 1.5 million properties that currently have flood insurance, according to government estimates. But such properties have accounted for about 30% of flood claims paid over the program’s history.

The article goes on to describe government’s unwillingness and inability to purchase such properties and prevent them from being rebuilt. It does mention that folks are reluctant to sell instead of rebuild. You may have a right to build on your own property but why do folks have an absolute right to be repeatedly bailed-out of subsequent problems by other taxpayers? What happened to fool me once…?

Oh, the government flood insurance program was 25 billion in the hole before the hurricanes this month. Yet another example of why big government doesn’t work.

Dear readers, please take these hurricanes and other such disasters very sober mindedly because when our turn comes in California, what you’ve seen elsewhere could be a picnic compared to what we will experience here. If you thought that no rebar in the Oroville dam spillway was the only shortcut government has allowed in California then you are a fool. I think our turn is coming soon.