In our last installment, we quoted the email from the Elk Grove Joint Unified School District which is presented again for your reference:

…I would expect that some students and staff members will elect to exercise their right to freedom of expression in a variety of manners. Such expressions could include sitting or kneeling during patriotic observances, including the Pledge of Allegiance or the National Anthem. While these are two of the most common ways people express themselves, I always marvel at the creativity of our students and staff and would not be surprised if they came up with other methods to express themselves.

Please do not overact or take disciplinary actions in response to such expressions. Site leaders should confirm this with staff, including off campus coaches, to ensure all staff understand that no punitive actions are to be taken against students or staff participating in an act of expression that does not interfere with the safe and orderly running of our schools or school sponsored events.

OK, so we have established the following from the school district:
• The District expects students and staff to “exercise their right to freedom of expression”
• Kneeling is permissible before school events
• District employees are not to interfere
• District employees may also participate
• No punitive action shall be taken against staff or students as long as it “does not interfere with the safe and orderly running of our schools or school sponsored events.”
• Other as yet unanticipated methods may be used for people to express themselves

Ladies and gentlemen of the audience let’s put the district to the test, from now on both coaches and players have been given a blank check to pray on the field before any school sponsored event and furthermore, they have been promised that the district will take no retribution against them as long as it does not interfere with event safety. 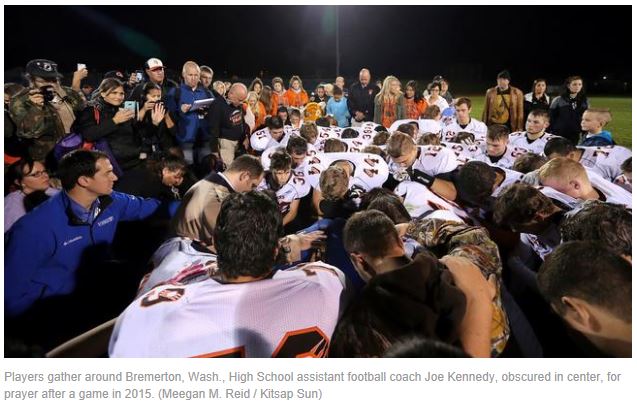