Yesterday’s Super Bowl was a great game on the field but the rest of the show (i.e. the commercials) were lame unless the soundtrack featured Johnny Cash. More on that in a minute.

At my house we skip the half time show and always have. As soon as the teams head to the locker room we hit the Mute button on the remote and pause the DVR so we can fast forward to the beginning of the second half. However, I did tell somebody prior to the game that we didn’t care which team won, we were only watching the game to see which cut of meat that Lady Gaga was going to wear for the half time show.

Now for the commercials, hands down the winner was the promo for The Walking Dead .

Much of the rest of the field was attacks on Conservatives, President Trump, or middleclass American values.

The commercials that I recall because of their in-you-face attacks on our way of life were three:
• The 84 Lumber commercial. Their unabashed defense and ever praise for illegal immigration was a clear attack on the President for trying to keep us safe and enforce existing law.
• Audi—portrayed women as chattel (property for those readers residing in Rio Linda) because of the income disparity between men and women. Sorry ladies but bearing children—especially out of wedlock—is bad for your earning power. This is why feminists embrace the sacrament of abortion instead of the Christian institution of marriage. Motherhood should always be before career. Also, in this category, you might want to add the promos for The Handmaiden’s Tale from Hulu. This show is based on a novel about a dystopian society where women are property.
• Anheuser Busch—also got into the immigration dust-up with their supposed origin story. For those that missed it, this beer conglomeration is no longer American owned, it was sold to a European company several years ago.  Any connection to Trump supporting Brexit? Makes you wonder.

For readers that may not know, my view of immigration is that we should welcome people that want to come here to be Americans and respect our way of life. If they want to keep their third-world values, live in some ethnic ghetto, and refuse to learn English then go somewhere else. We don’t need more people draining the resources of hardworking taxpayers and living on the dole. We have more than our fair share of home grown slackers living off of other people’s money. If folks want to come here, work hard, and play by the rules then “ya’ll come”.

The best spot during the broadcast was actually in the pregame show. The Ragged Old Flag segment featuring a 1974 song by Johnny Cash was great if you were willing to be charitable about a few things.
1. If you pretend that you don’t know the political allegiances of people in the segment like Harry Belafonte and take them at their word when praising American and the Constitution.

(By the way, does Harry look a bit like Voldemort?) 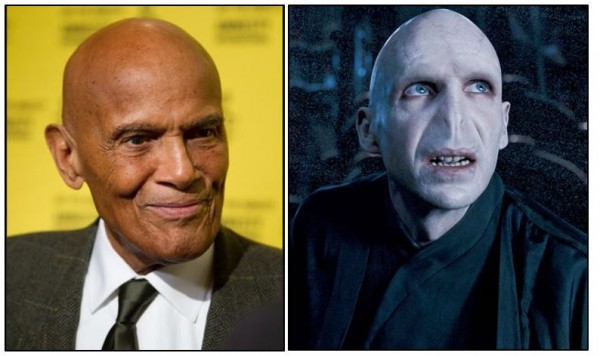 2. Why does the Fox announcer think we are divided? Only a few well paid malcontents are causing trouble by following the lead of a recently unemployed community organizer.
3. Cash wrote the song during the height of Watergate and thus it can be interpreted as saying the country will survive despite this out-of-control-guy in the White House.
4. The video tries too hard to be inclusive and politically correct instead of just following the story told in the song.

If you can look past these four things the video is moving.
Link: Johnny Cash Video

I was surprised that it was actually produced by Fox Sports and wasn’t tied to a Super Bowl sponsor. The back story to the spot can be found here and it’s worth the read.