During the Clinton Administration, Democrats were desperate to stop Republicans and the quickest way to stack the voter rolls was to create more voters by giving felons the right to vote. The fight to stack to voter rolls with more Democrats resulted in Paul Shanklin recording a parody of Elvis Presley’s Jail House Rock in 1999. The parody, sung by Jesse Jackson was titled Rev. Jackson’s Jailhouse Vote.

This is actually happening again right now in Virginia. In a desperate effort to help Democrats, the governor, Terry McAuliffe —an associate of Bill Clinton’s—is adding 200,000 felons to the voter rolls in time for the November election.

Yesterday, I went to the Sacramento County Elections office and guess what I saw?
Yeah, the jailhouse voter rights sign. 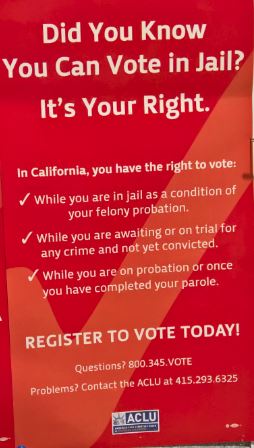