Since Celeste Grieg was shown the exit in 2013, many peculiar financial arrangements have come to light. For a full accounting of these and others, you may need to attend the CRA Board meeting on May 30th. Perhaps you will leave with more questions than I am about to raise but here is a preview of likely topics.

• Why were twelve ATM cards running about the state for CRA bank accounts? Who had them?

• Why did CRA have four different accounts? Why was this not in the Treasurer reports?

• Where is the accounting of expenses for 2014? The Treasurer has zero receipts for the entire year.

• Why were some chapters allowed to pay their convention registration by personal check but members of other clubs were required to pay cash?

• Why did the Membership Secretary get paid for mileage and expenses this year and last? When was that authorized? Where are receipts? Who signed the checks? Was this on CRA ATM card?

• What happened to the CRA Business Round Table?

• Where is the accounting of the CRA conventions this year and last that were sponsored by the Placer County Republican Assembly? No deposit records for money received or receipts for expenses were ever presented to the Board.

• Why did the account for legal defense have $6,000 in it? All legal bills were paid before Celeste left office. Why was the account even open? Bonus question: why did John Briscoe promptly resign after this account was closed?

Oh, once again I remind you that Aaron claims that he and George are experts in the financial services sector. They have superior training or so he has asserted. Based on what I’m about to present, I wouldn’t trust them with the neighborhood lemonade stand.

Below is the final report of the March 2015 CRA Annual Convention. 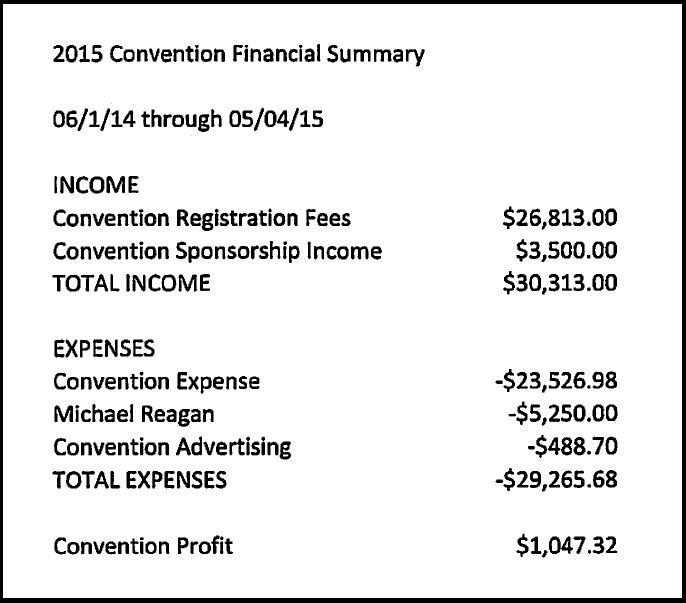 That’s it. This is the whole report.

What about the $800 from the raffle at the last Convention?

Again, this is from the self-proclaimed experts in financial matters.

Over the last week or so I have presented what the news is, tomorrow you’re going to learn the rest of the story.