In the course of getting through my MBA program I have run across some really good teachers and some that are so removed from reality that I can’t seem to find much common ground to even communicate with them.

I rarely listen to Michael Savage but I know that he contends that liberalism is a mental illness. I am now not only willing to concede the point but wholeheartedly agree with his assessment. At its root however, I think that liberalism is the result of spiritual death that comes from rejecting God and his Word. Put another way, Christ is the cure to liberalism.

A case in point is my current instructor. He has multiple degrees—including economics—and a doctorate. He looks at the spending spree of the federal government and his only gripe is that President Obama is not spending enough money to effectively rescue the economy. He claims that Obama is beholden to the right wing of the Republicans because he allowed a few token tax cuts amongst all the pork. Let me get this straight, every Republican in the House of Representatives voted against this bill and the three most liberal Republicans in the Senate voted for it and Obama caved to the Republican right?

The effective debt of the US government exceeds 65 trillion dollars—which is greater than the gross national product of the entire world—and he has the stones to say Obama is not spending enough money? In adjusted dollars, Obama has spent more than FDR in the New Deal in less than two months! 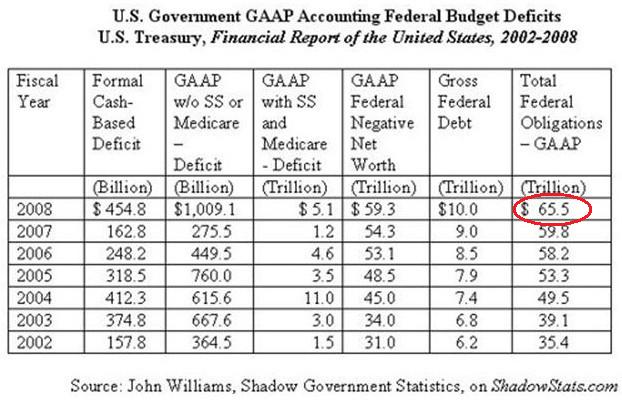 Furthermore, my instructor thinks Obama should nationalize every financial institution in the US and then after a few years the government should divest then (make then private again) and create one thousand small banks. These banks would not be allowed to merge to form larger banks by aggressive use of anti-trust legislation.

My instructor feels that all our problems can be solved by government central planning of production and aggressive use of wealth redistribution. He wants the outright confiscation of all wealth from the top five percent of all income earners. He asserts that we need to be more like France and Germany. We need more days off, nationalized healthcare and more government control of the economy. This conveniently negates fact that France and Germany are demographically on the verge of extinction due to legalized abortion and other social factors that resulted in low birth rates. For many decades the birth rate has been below replacement levels for all European countries. In addition the large Moslem populations in these countries are pressing for recognition of Sharia Law in these formerly Christian nations.

Of course my instructor is also a believer in “green” energy. He seems to want the personal use of automobiles banned and replaced with mass transit. To facilitate this, he wants housing to be changed to cram as many people as possible into the smallest amount of space. Gaia forbid that we should have yards around our houses and waste water keeping them green.

These are just some of the issues that I can recall my teacher advocating. So why you may ask do I contend that these beliefs are symptoms of a spiritual illness? Let me briefly try to explain.
God has created three institutions to govern man: government, church and family. For a healthy society, each of these must be in balance. Each has an exclusive area of responsibility but there are areas where each intersects.

All law is religious.

“…in any society, any change of law is an explicit or implicit change of religion. Nothing more clearly reveals, in fact, the religious change in a society than a legal revolution. When the legal foundations shift from Biblical law to humanism, it means that the society now draws its vitality and power from humanism, not Christian theism.” RJ Rushdoony

Any change in law is a change from one god to another. In the same book, Rushdoony states, “…it must be recognized that in any culture the source of law is the god of that society”.
The basis of Western civilization is rooted in biblical values.

Given the above, what my teacher is advocating is removing the last vestiges of biblical Christianity from our society and replacing them with the power religion of the secular state.

For many, it may be a distant memory but the Ten Commandments are still one of the pillars of Western Civilization. What my teacher is embracing is inverting the edict “Thou shall not steal” and making it the basis of implementing social change. His whole vision of utopia is built by wealth redistribution at the point of the sword wielded by the State. This is the formula for tyranny not liberty.

My teacher thinks by abolishing much private property and nationalizing businesses and thus investing the government with the power to plan our lives he can solve society’s ills.
One can’t help but recall that the Scripture proclaims, “Professing themselves to be wise they became fools “.

My teacher’s utopia can only end in a tyrannical society based either on fascism or socialism. You would think after the hundreds of millions that died in the last century for these two belief systems men would reject such evil. Unfortunately, my teacher thinks he can get it right where Hitler, Stalin, Mao and the rest got it wrong.