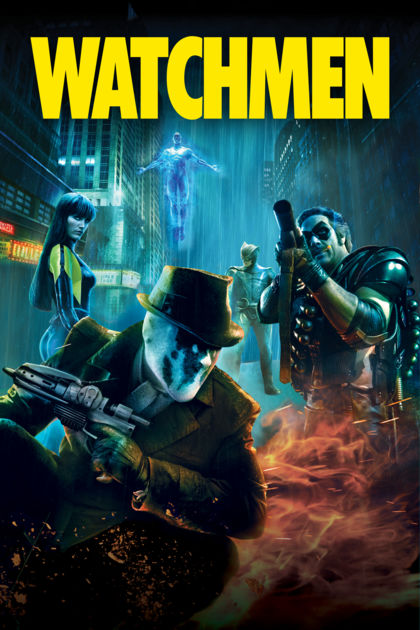 Over the weekend I snuck out of the house and went to see the movie Watchmen. I had read much of the publicity about the movie. I also was familiar with the legal disputes that almost stopped the film from being released.

Unlike some ignorant idiots, I did know that this was an “R” rated movie and not intended for children. The violence in the film was not as disturbing to me as The Dark Knight Batman movie from last summer. Most of the rape scene in the movie ended up on the cutting room floor but has been promised in the director’s cut of the DVD. You did get the idea of what happened and at least a few other guys stopped it once they figured out what was going on. Dr. Manhattan manages to spend half the movie buck naked and the full frontal shots of his “purple pickle” at parade rest is a new addition to the “R” film genre.

The movie soundtrack has many old songs that we have heard before. Bob Dylan singing “the times they are a changin’” was the first I remember. The most irreverent moment related to the soundtrack in the film was the song used for the big love scene between Night Owl and Silk Spectre. If you listen to the lyrics, the song is about King David composing a song of praise to God with the refrain of Hallelujah. So what you get in the movie is a song that keeps repeating Hallelujah while the passionate couple is going “oh yeah baby”. This song choice tells us about the director’s view of God and contributes nothing of substance to the scene.

The film features some bit parts of characters that you might remember from the 1980s.One scene includes characters doing an episode of The McLaughlin Group. It features: Eleanor Clift, Pat Buchanan and John McLaughlin. In another scene we meeting several captains of industry including Lee Iacocca right before Mr. Iacocca and several others are murdered by an attack on the group and their host. The infamous Apple computer ad from the 1984 Super Bowl makes an appearance in the film also.

The portrayal of Richard Nixon as a blood thirsty President that decides on a nuclear first strike on the Soviet Union is not in character. Neither is the depiction of Nixon using of Dr. Manhattan as the weapon that ends the Vietnam War. Nixon was the one that started nuclear disarmament talks with the Soviets and Henry Kissinger was close to a settlement in Vietnam before Nixon resigned. Had Nixon remained in office, the timeline in Watchmen would never occur.

At this point stop reading unless you want to know some more details of the film including my take on the ending.

You know who the bad guy is in this film the first time you see him. He is not revealed to the characters in the movie until the end of the film. Frankly this spoiled the film for me.

Rorschach is the character that actually moves that plot along in the film as he tries to discover why someone would kill a 67 year old retired crime fighter called the Comedian. In flashbacks we get to meet the Comedian. How he got the name is never explained. The Comedian is never funny or likeable. He is a selfish, murdering S.O.B. that gets his kicks hurting others.

Rorschach reminds me of Charles Bronson in Death Wish or Eastwood in Dirty Harry. He is a vigilante that sees the world in black and white. His search for the truth is compelling. He operates outside the law and delivers the justice that “the system” is too weak to administer.

The villain in the movie reminds me of someone that you would find in a James Bond flick with one major difference. Bond always stops the bad guy at the last minute. Good eventually triumphs over evil. However, in this movie not only does the bad guy get to nuke several major cities and frame Dr. Manhattan for doing it, he gets away with it! Rorschach protests and Dr. Manhattan kills him! Then Dr. Manhattan leaves earth for greener (or redder) pastures. In the final scenes of the movie, we then see that the villain’s corporation gets the contracts to rebuild the cities that he just nuked five minutes before.

Watchmen is yet another film that does not deliver a comic book ending for “Truth, Justice and the American Way”; instead it embraces relativity, moral ambiguity and materialism. I really wanted to like this movie but it left me empty and unsatisfied. If you want to see it, save some money and wait for the rental.