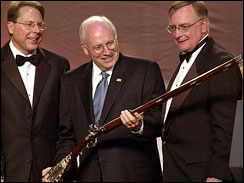 1. While the Vice President will no longer be known as a straight shooter, the real question is was he leaning to the Right when he fired?

2. Did he have a campaign flashback and think he was in Cambodia?

4. If Dick Cheney has you in his sights, you’re in big trouble.

5. I bet young men will think twice before dating the Vice-President’s daughter now!