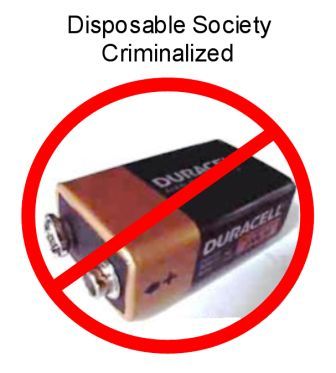 When can you tell that government is out of control? When government makes law abiding citizens into criminals just for going about their daily lives, the government has overstepped its rightful boundaries.

If you are a gun owner, smoker, motorcycle rider or other persecuted minority in California for doing something that is legal, you now have company. Every citizen in California has been made a criminal today. That’s right! Effective today, if you throw a dead AAA battery into the trash you are criminal. If you put a burned-out light bulb into a dumpster you are an evil doer. If you toss a disposable cell phone you are scum. So says the California Department of Toxic Substances Control (also called CalEPA).

A summary article can be found at the KCRA-TV website.

Other banned items include some tennis shoes made before1997, greeting cards that play music, freezers, washing machines, space heaters, radios and disposable lighters.

The real lessons to take from these Liberals are these:

We cannot listen to terrorists talking on disposable cell phones but we can imprison them for tossing the phones into the trash when their calling minutes are expired.

Our State legislature is more fearful of the batteries in my baby’s electronic toys than the possibility that thermonuclear weapons might be detonated in San Francisco or Los Angeles.