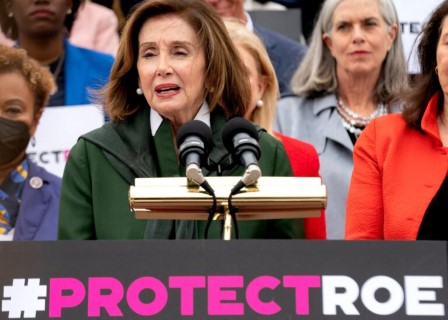 One of the best lines in the movie Gladiator is at the beginning when Russel Crow, playing General Maximus, is about to release the full might of his Roman troops on a bunch of barbarians. “At my signal, unleash hell.”

Today, a bishop in the Catholic Church, did something similar. He pronounced that he was excommunicating House Speaker Nancy Pelosi. As a result of this pronouncement, she is now banned from Holy Communion. I will get into this more in a minute but let’s look this news story. First the pronouncement of the bishop.

San Francisco Archbishop Salvatore Cordileone announced Friday that House Speaker Nancy Pelosi is barred from receiving Holy Communion due to her pro-abortion stance — marking an escalation in a decades-long tension between the Roman Catholic Church and liberal Democratic politicians on abortion.

Cordileone has written to the California Democrat, informing her that she should not present herself for Holy Communion at Mass, and that priests will not distribute communion to her if she does present herself.

“A Catholic legislator who supports procured abortion, after knowing the teaching of the Church, commits a manifestly grave sin which is a cause of most serious scandal to others.  Therefore, universal Church law provides that such persons ‘are not to be admitted to Holy Communion,'” he says in the letter.

The Catechism of the Catholic Church is unambiguous on the question of abortion, both in procuring one and assisting in the practice: “Since the first century the Church has affirmed the moral evil of every procured abortion,” the catechism says. “This teaching has not changed and remains unchangeable.”

“Direct abortion, that is to say, abortion willed either as an end or a means, is gravely contrary to the moral law,” it says, before calling abortion and infanticide “abominable crimes.”

It also declares that “Formal cooperation in an abortion constitutes a grave offense. The Church attaches the canonical penalty of excommunication to this crime against human life.”

So, there you have it, Nancy Pelosi, and by extension, anyone claiming to be a Christian that participates in or promotes abortion, has violated God’s Law and helped commit “abominable crimes” and such a person is to be excommunicated.

Folks, this is a really big deal. Nancy has been declared an impenitent sinner and in the eyes of the Church, she has literally been turned over to Satan.

The practice of excommunication arose in the early Church.  In his First Letter to the Corinthians, St. Paul castigated that community for tolerating the practice of incest–  “a man living with his father’s wife” (I Corinthians 5:1).  He admonished the Corinthians for not removing the offender from their midst.  St. Paul said, “I hand him over to Satan for the destruction of his flesh, so that his spirit may be saved on the day of the Lord” (5:5).  St. Paul further warned against associating with anyone who bears the title “brother” (indicating being a believer and part of the Church) but who is immoral, covetous, an idolater, an abusive person, a drunkard, or a thief.  He then closed the passage by quoting from the Torah, “Expel the wicked man from your midst” (Deuteronomy 6:13).

Did you get that in the above paragraph? “I hand him over to Satan …”

Part of excommunication is that no one that identifies themselves as a Christian is to associate with her. Nancy is cutoff from God, and any fellowship with other Christians. She is to be shunned.

An excommunicated person also cannot be received into a public association of the Christian faithful.

To allow Nancy to claim to be a Christian in good standing is wrong. By allowing her to remain in the Church she is leading others into error. This must end.

A bishop may directly impose the penalty of excommunication, but only for the most serious offenses and after giving due warning (#1318).  Following the same rationale of the early Church, this severe penalty intends to correct the individual and to foster better church discipline (#1317).  As the shepherd of his diocese, a bishop must protect both the souls of the faithful from the infection of error and sin, and of those who are jeopardizing their salvation.

Excommunication is a warning that Nancy Pelosi is going straight to hell unless she genuinely repents.

We must keep in mind that the purpose of excommunication is to shock the sinner into repentance and conversion.  Excommunication is a powerful way of making a person realize his immortal soul is in jeopardy.  Excommunication does not “lock the door” of the Church to the person forever, but hopes to bring the person back into communion with the whole Church.  Moreover, this penalty awakens all of the faithful to the severity of these sins and deters them from the commission of these sins.  This line of thought is highlighted in the Catechism when it speaks of the automatic excommunication for abortion:  “The Church does not thereby intend to restrict the scope of mercy.  Rather, she makes clear the gravity of the crime committed, the irreparable harm done to the innocent who is put to death, as well as to the parents and the whole of society”

Oh, one little nugget in the Fox News story to add some context, Bishop Cordileone sent the warning letter to Speaker Pelosi BEFORE the draft of the Supreme Court decision was leaked to the public.

Cordileone says in his letter that he wrote to her on April 7, informing her that “should you not publicly repudiate your advocacy for abortion ‘rights’ or else refrain from referring to your Catholic faith in public and receiving Holy Communion, I would have no choice but to make a declaration, in keeping with canon 915, that you are not to be admitted to Holy Communion.” He says that since that time, she has not done so.

The Bishop sent his letter April 7th and the Draft of the Supreme Court decision was published by Politico May 2, 2022.

Ok, get in Nancy’s shoes for a second. Your spiritual shepherd has told you that you need to repent for your sin of promoting, encouraging, and funding abortion, a grave moral sin, and then the nine in black robes agree with your bishop. What should you do?

Repent or double-down on your sin?

Nancy encourages the mob to get even with her fellow Catholics on the Court and makes sure anyone on her side of the aisle has their home address to insure maximum impact of these protests. Oh, by the way this is enabling a violation of Federal law which says judge’s homes are off limits.

She also doubles-down on trying to overturn the Court’s decision before its even announced.

Then she triples-down by trying to fast-track a law to make abortion legal for all nine months of the pregnancy in all 50-states.

Meanwhile other Catholic politicians in her Party are trying to protect abortion as it is under Roe and take it even further by making euthanasia legal from conception thru at least the first year of life.

Given all this, can any reasonable person think that the Bishop had any option but to throw her out? Nope.

Nancy is hellbent on killing and killing and more killing. She is the very definition of unrepentant.

We here at the blog are grateful that the Bishop did this; however, the Catholic Church has many weasels in it and it remains to be seen if the Church has his back in a good way or like Brutus did for Julius Caesar.