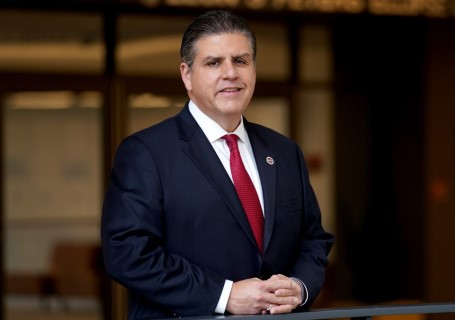 Joseph Castro (photo above) was the Chancellor of the California State University system until yesterday when he made the “biggest decision of his life….to resign.”  He was under investigation for mishandling sexual assault and workplace intimidation claims of a colleague.  Castro was in his first year as chancellor after being promoted from President of CSU Fresno.  While at CSU Fresno he was a dumpster fire to say the least, check out this report….

Castro was personally aware of at least seven complaints against Frank Lamas, the head of campus student affairs at Fresno State. The complaints against Lamas, at least 12 in all, detailed a pattern in which the senior administrator “stared at women’s breasts, touched women inappropriately, made sexist remarks, and berated, belittled, and retaliated against employees,” ,” USA TODAY reported. Those complaints began soon after Lamas was hired and spanned the six years he was on the job.

Not one, two or a third complaint, 12.  That my friends is a pattern, a really bad one.  Castro and Frank Lamas were obviously close, check out this bombshell…

Despite knowledge of the allegations, Castro still recommended Lamas for an achievement award and later — rather than firing or calling for his resignation — paid him $260,000 and full retirement benefits to leave his post. The settlement forbade Lamas from ever working again at the Cal State system, but promised him a letter of recommendation if he wanted to work at a different college.

I understand the idea of paying someone off to avoid litigation, but the idea of a letter of rec?  That just seems like allowing a predator to continue elsewhere.  To our non-California readers, this is quite common in our education system at the high school level.  There is even a word for it…passing the trash.  Castro in his bio claims he graduated from Cal Berkeley and Stanford, he is obviously not dumb, but how could he be so tone deaf in the #metoo era?

That same day Castro and Lillian Kimbell, who heads the Cal State board of trustees, both said that they welcomed an independent investigation into how Castro handled the assault charges against Lamas. Castro partially defended his actions at Fresno State: “While I followed CSU policy and took the steps to ensure this individual could never work on a CSU campus, I recognize that certain aspects of the process should have been handled better.”

Castro further explained his rationale for offering Lamas a letter of recommendation in an “open letter” he shared with Cal State students and staff that night. “In hindsight, while my motives were to expedite Dr. Lamas’ permanent removal from the CSU, I regret agreeing to this aspect of the settlement, knowing that it caused additional pain,” Castro wrote.

So, in the eyes of Mr. Chancellor paying someone off is the best way to expedite a dismissal?  Well, I guess when it’s the people’s money not yours that’s the way it works.  I take back what I say about Castro being smart, he is just a dumb bureaucrat who would be on unemployment if it weren’t for government work.  Only in government is incompetence allowed.

Consternation continued to flow. Students had gathered protesting Castro’s handling of the sexual assault claims. The Visalia Times-Delta posted an editorial urging the university’s board to fire Castro. The systemwide academic faculty union sought an independent investigation, calling the USA Today report “disturbing.” The faculty senate at Fresno State also expressed dismay over Castro’s time at Fresno through a vote of no-confidence.

At this point the cake was baked, Castro needed to resign.  A career of incompetence.  All Castro needed to do was turn over the reports to a Title 9 officer.  Trust me on this the UC and CSU system is chock full of bureaucrats holding the title Chief of ___, but unlike me they have real jobs, for me it’s just a fancy name.  Castro could have called a legal counsel; I am sure again numerous were at his beck and call. Could have gone to the trustees on the board, or even the governor, attorney general…. heck the damn city council of Fresno.  But nope, he hid a sexual deviant and predator for reasons unknown.

Truth be told, the toughest decision Castro had to make was covering for Lamas, and he instead made it over and over and over again.  The #metoo movement may not be one you agree with, but if you think you can escape unscathed your mistaken.  Castro had a ton going for him, and he threw it all away.  He is a loser, and a coward.  He spoke about how he disagreed with the decision of the board and their investigation…. why didn’t he dig in and fight?  Instead, he didn’t, like any other coward he cut and ran.  He talked about how resigning was a tough choice, really it wasn’t.  Cowards like him do it all the time, they would rather run away then face the music.

The last aspect of this commentary from me is this.  God Bless, State of California quit hiring people based on their skin color or “being the first.”  This Castro moron was in way over his head, the job was too big for him.  But he checked a box and in California that is all that mattered.  Quite a few highly qualified folks likely applied, and Castro was selected based on his skin color.  Go ahead try to call me a racist, I call it like I see it.  Castro had these issues at CSU Fresno, and they finally bubbled up a year later?  Nice job Castro…. now make an easy decision, stop covering up sexual assault, and why the hell are you helping out a low life like Lamas?